P2: (5.8) Continue up from the anchor on lower angle face and discontinuous cracks, alongside a stunning right facing dihedral. A pin and bolt supplement the discontinuous cracks system. The pitch ends under a small triangular roof at another 2-bolt anchor.

P3: (5.9+) Climb up to the roof passing it on its left. Enter into a left facing dihedral. Half way up the dihedral a bulge is encountered (5.9+). Fire through the short crux and continue on easier ground, to a ledge system, ending at a 2-bolt anchor.

P4: (5.8) Climb up and slightly right from the belay over clean rock to a 2-bolt anchor.

(Variation P4: (5.10) Having not done this variation, I can't accurately comment on it. The Sandia rock book comments on loose rock, and attempts to steer climbers to the line I describe above.

NOTE: Pitches 3 & 4 can also easily be combined with a 60m rope, a 50m rope is probably possible as well.

P5: (4th class) Cruise the 4th class gulley to the spacious "Football Ledge". Belay at the north end of the ledge, there is a large boulder that can be slung as an anchor.

(This pitch is best simul-climbed, however can be done with an intermediate belay before a short headwall within the gulley. From the two bolt belay at the top of pitch 4, you cannot get to the ledge starting pitch 6 in a single 60m pitch)

P6: (5.9+) Face climb to the base of a small roof and a right facing dihedral, ignore the old bolt at the entrance to the dihedral. About 30 feet to the left is the end of Warpy Moople's p5. An awkward move into the dihedral, followed by a section of OW awaits the leader. After the short OW another awkward slot followed by easier ground to a sloping ledge. This ledge is also the belay for the end of p6 for Warpy Moople.

[GP suggestion for rack.]
Bring:
2 each of finger-size cams, especially if intending to link pitches
1 each thin hand to fist-size cams, up to #3 blue camalot
bigger cams (#4, #5 camalot) optional but can be placed
1 set nuts
Don't need: tiniest cams (#00,#0 TCU) or RPs. 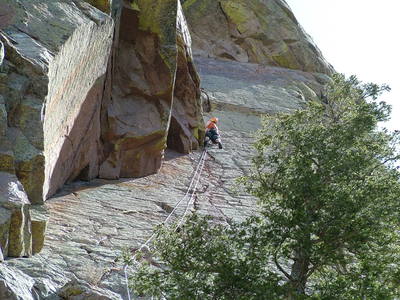 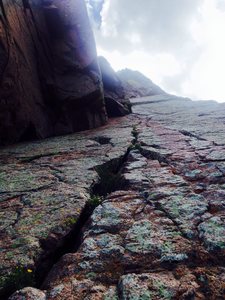 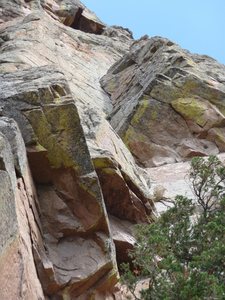 The center of the upper half of this photo feat… 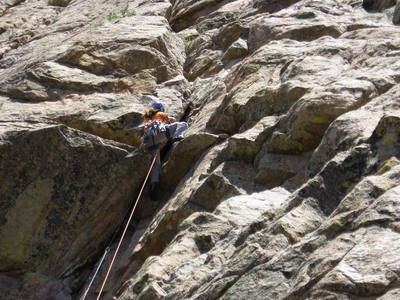 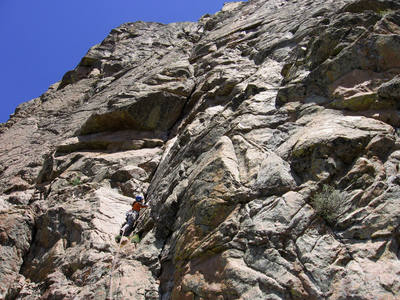 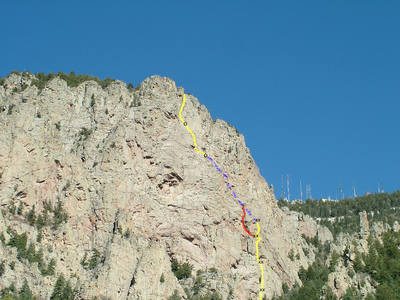 Approximate route. Blue is 4th class. Red is a… 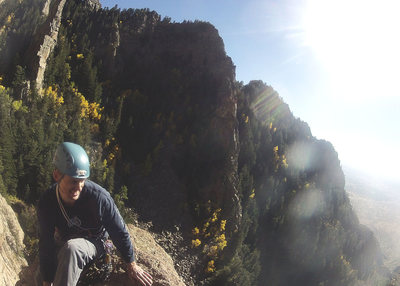 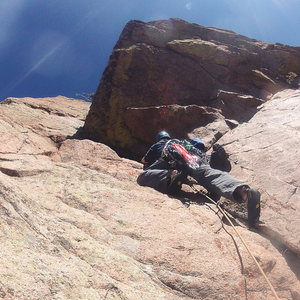 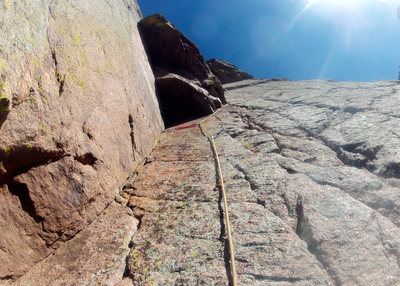 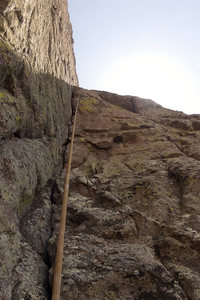 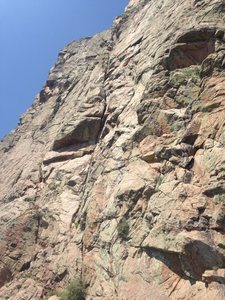 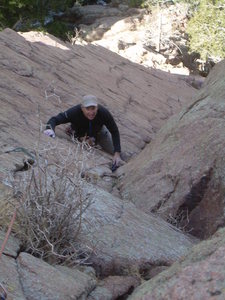 Ken Trout nearing the end of the second pitch.