The 800’ Muralla Grande is the most popular large formation for multi-pitch climbing in the Sandias. This massive SW-facing cliff face is easily seen from Albuquerque, standing just beneath the communications towers in upper Chimney Canyon. The rock wall boasts many long, quality routes from 4-7 pitches, including The Second Coming (the most popular multi-pitch 5.8 in the Sandias), Warpy Moople (a classic 5.9 with a somewhat runout “rite of passage” crux pitch for a 5.9 leader), Excitable Boys (a beautiful clean corner system and one of the most popular long 5.9s in the area), Little Yellow Jacket (5.11-, a great intro to Sandia climbs over 5.10), and Thunderbird (an adventurous 12- that’s invariably on the hit list those who seek out this grade). The rock quality is quite good (about as good as it gets in the Sandias), except for the top pitch of some of the climbs. The approach is fairly quick (~30 minutes) and on a well-established climbers' trail. Most climbs will be shaded early (I've often been shivering at the first belay), but go into full sun by late morning.

Although popular, Muralla Grande routes are a step up in seriousness & commitment compared to the shorter 1-2 pitch Sandia climbs off the La Luz trail and in Echo Canyon at the same grades. Over the years, many parties have reported having some routefinding difficulties on sections of climbs like Second Coming, Warpy Moople, and Little Yellow Jacket. Bailing off from most of these climbs will probably involve leaving gear behind and building intermediate rap anchors, followed by an unpleasant hike up the loose approach gully (so don’t bail!).

If you finish early and need more climbing, consider lowering in and climbing the various finishing pitches on the Second Coming headwall (great 5.8-5.10 cracks), or go over to the nearby Clandestine Wall.

The Chimney Canyon Trail reaches junctions with other minor trails just below a limestone band; at these-- take the right fork that drops down to the west. (Don't take other trails that continue south along the limestone band). After 4 switchbacks you'll emerges at a flat area with aspen trees and tall grasses making the trail more obscure, and a trail junction. The straight ahead (to the South) trail branch goes down the correct approach gully (this appears less well traveled initially). The right trail branch (to the West) goes to Muralla Grande summit (You can take this one if you wish to leave anything at the summit where all the climbs end). If you go all the way to the Muralla Grande cliff-top, return back to the junction where you entered the aspen meadow-- if you try to take a shortcut, you’ll likely end up bushwhacking through spike bushes down the wrong (western) gully, which is much looser.

From the aspen meadow, the Chimney Canyon trail goes to the south, and soon drops down a steep, rocky, gully into Chimney Canyon.  When the trail south from the aspen meadow starts contouring around to Clandestine Wall don't pass up the 90 degree right turn down the steep gully that may be obscured by foliage. (The gully is loose enough that you want shoes, but doesn’t involve any scrambling or downclimbing.) You'll see the prominent Chimney formation ahead. At the base of the gully, the Chimney Canyon trail passes to the right of the Chimney. Muralla Grande is the large face on your right. The first clean face on Muralla Grande is “Lawyers, Guns & Money”. Next is The Second Coming, which is directly on the South Face (and is in the sun for a good part of the day in fall and winter). Continue down and around the formation to the other climbs on the main southwest face.

(These coordinates work in Google Maps)

It's also possible to rap in via "The Rapture" (3 rappels w/ 2 60m ropes), though I personally favor walking down the gully for various reasons. 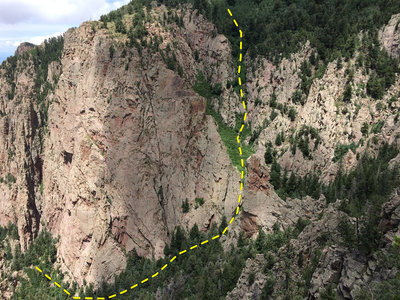 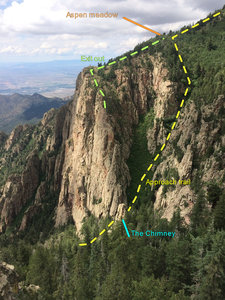 Another option for the approach is to park in t… 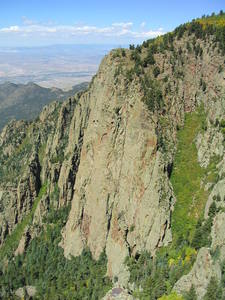 Photo of Muralla Grande from the Sentinal. 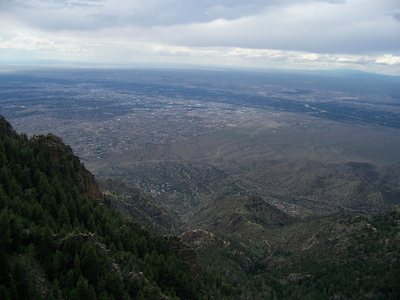 Beginning of the third pitch... watching the we… 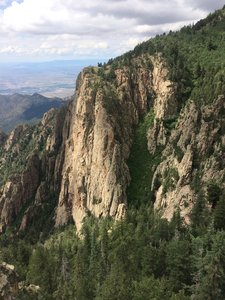 All Photos Within Muralla Grande