Four pitches, the final of which is the makes this one such a beauty. However, the star rating of the route really depends on which way you decide to go on the headwall at the top. There are four choices for the final pitch (5.10d, 5.10a, 5.9, and 5.8).

Getting There: Follow directions to Muralla Grande. Soon after you get to the bottom of the couloir of death talus and rocks, begin looking to your right. You will eventually come upon an alcove beneath a large headwall (the headwall is high up on the route). If you round the corner toward the bottom of the hill at the base of the stone, you have gone too far.

Pitch 1 (~30m): Begin up the right corner of the alcove, climbing past a small tree. At the top is a large with another pine tree. If you plan on taking the variation going straight up, belay from the tree, if you are going up the chimney variation, it is best to traverse left to a spot below the chimney.

Pitch 2 (~50m): 2 variations:
A- Traverse left into an awkward looking chimney, after exiting the chimney, continue climbing up over some loose rock to a very large ledge. There is also an optional intermediate belay with shiny bolts about 20 feet beyond the chimney.
B- You can also take a more direct line by going straight up and diagnaling to the left toward the ledge. I found there was plenty of places to put protection going this way.

The second pitch is quite long and as discussed above the leader of the 1st pitch might want to set the anchor at the start of the chosen variation (either at the tree or under chimney to the left of the tree.) Either that, or the climb can be made into 5 pitches by using the bolt anchor in the middle of variation A.

Once attaining a large ledge at the end of the pitch, there are a few places to set a belay for pitch 3. You are aiming for the large, left facing dihedral. You can set up your belay below and left of the dihedral, or you can move to the uppermost part of the ledge just below two fixed pitons (slightly trick anchor set up with some with a flaring crack, but I found solid placements to back up the piton.)

Pitch 3 (~50m): From here there are a few different ways to get you to the same location. If you start under the pins, after clipping the second pin undercling a flake moving left into the left facing corner.
OR, you can climb from left and below the corner to eventually gain it.

Continue to climb up to the large left facing dihedral, eventually moving to the left to a right facing corner. Follow this corner to the base of the headwall. You will know you are there because you will see a beautiful 10a finger crack directly above you, and a 5.9+ crack going up and right. There is one bolt and a fixed piton here for an anchor.

Pitch 4: Four choices here. (a) Far Right, a 5.8 crack is the original finish. (b) To the left of that is a widish crack that goes at 5.9. (c) straight up and slightly to the left is a clean, steep fracture (very nice, this is the way we took! It has been noted that a double set of nuts is nice for this pitch, though I did not use that) that goes at about 10 a/b. (d) To the far left is a 5.10d crack, which I know nothing about. At the top is a large tree about 15 feet back from the cliff that you can belay from. There are also some newly placed bolts at the top of this pitch.

Once at the top, follow the trail that goes away from the cliff and eventually veers to the left, to the top.

Can also rap back to the base of the the climb if so inclined (see comments below) via either second coming itself or the route next to it, Rapture.

Gear: Took a double set of camalots to #3 with a set of nuts.
Anchors: Gear, except for the top of the 3rd pitch (bolts), and the final pitch (tree). 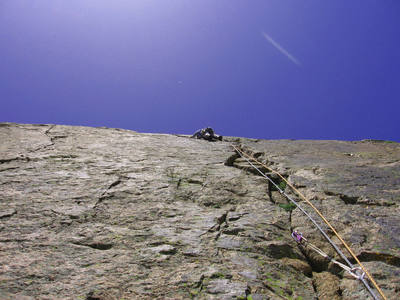 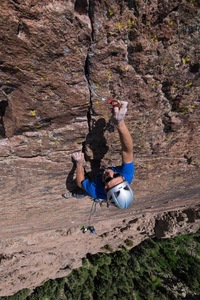 The 10a variation of the last pitch is money! T… 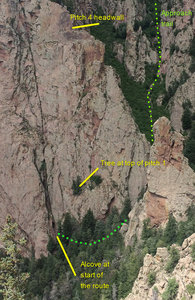 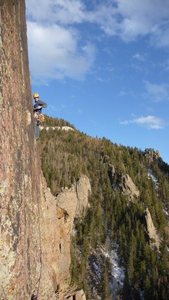 Climbing the headwall of Second Comming 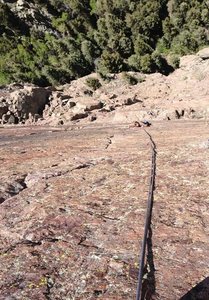 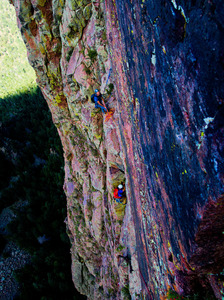 Robin belaying me up the 4th pitch and Ryan fin… 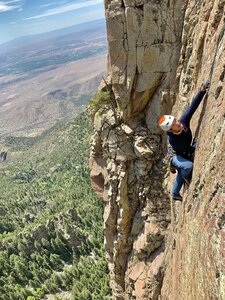 Mark finishes up the 10a variation of P4. 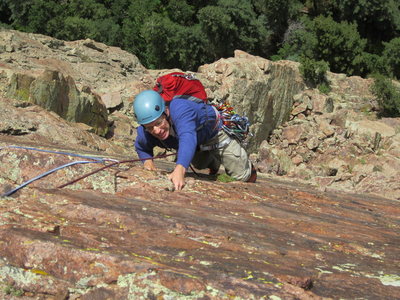 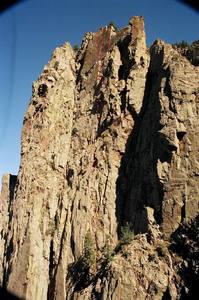 An attempt at marking the route Second Coming.… 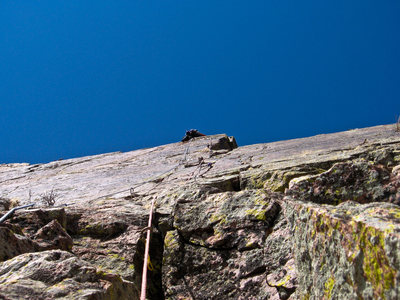 Robin completing the 5.8 variation of p4. 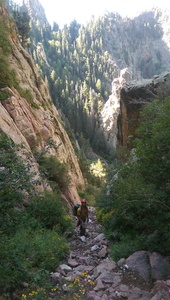 Wes near the final bit of the approach - "death… 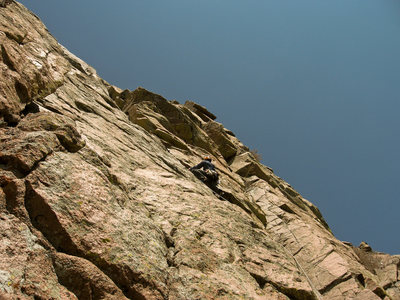 Chuck checking out the original p3. The recomm…

More About The Second Coming