Excellent rock, incredible exposure, high elevation, and panoramic views earn this the deserved status of one of the 100 best alpine climbs named in John Moynier and Claude Fiddler's "Sierra Classics".

I'm sure this has been done many times car-to-car by parties stronger than mine, but most will opt for at least one overnight at either Iceberg or Upper Boyscout Lakes to acclimatize and enjoy the surroundings. Consider combining with one of the Whitney routes (East Face, East Buttress) by camping an extra night at Iceberg.

The route itself is roughly 8 pitches, and follows a sharp crescent-shaped spine on the southern aspect of the peak. The start is a bit ambiguous, so just follow the path of least resistance for a pitch or so to gain the ridge proper. Continue along the ridge for several more pitches. At one point, you'll have to downclimb about 15' to a prominent 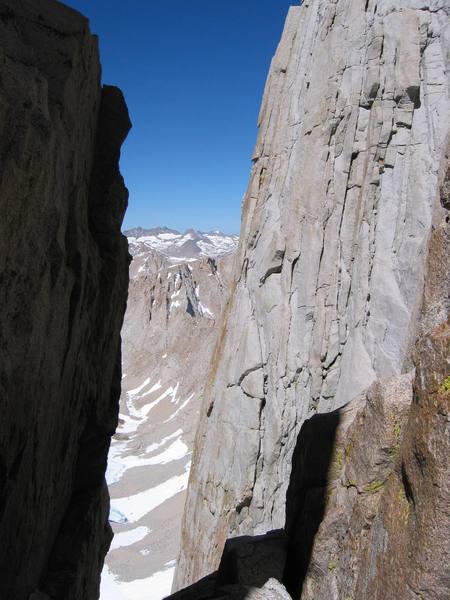 Looking south from The Notch. . The pitch above the notch is the 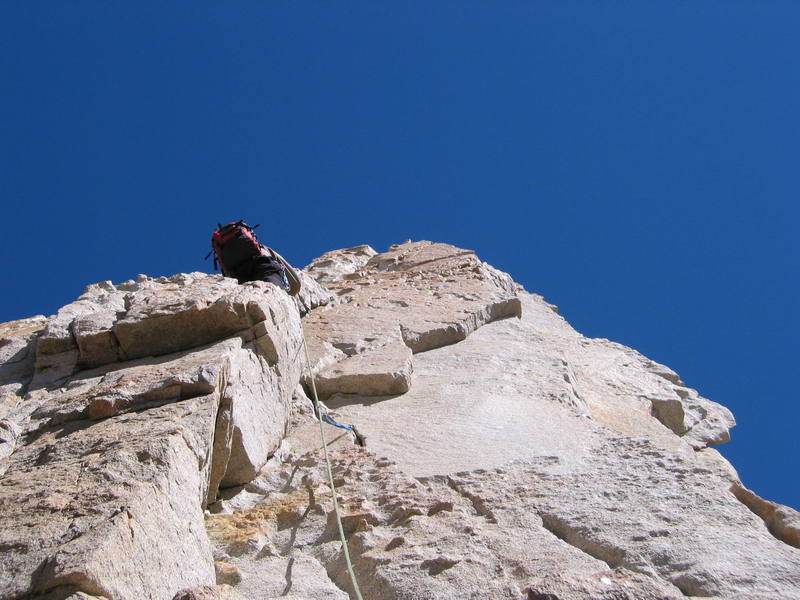 The money pitch, just above the prominent notch. , on impeccable golden rock. Continue for several more pitches, staying on the spine for full value. From the summit, descend via the 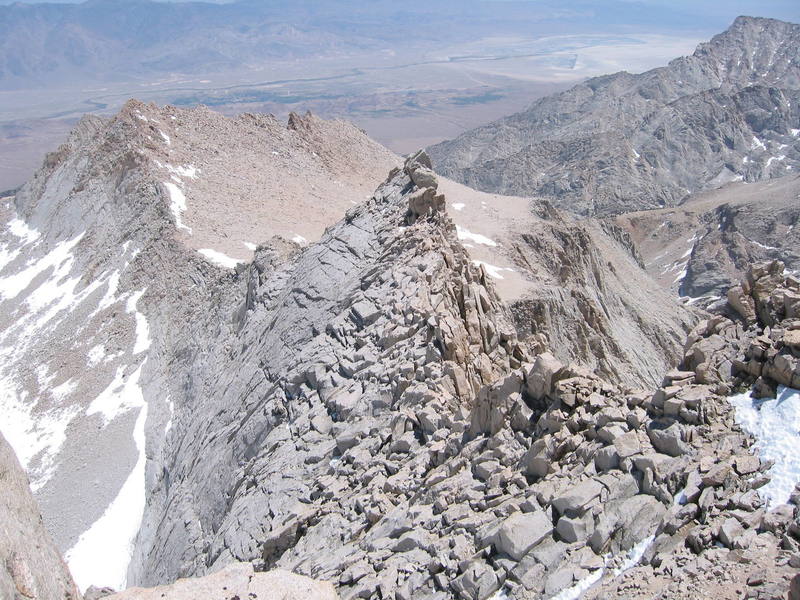 The beautiful East Ridge descent. . This will take you back to 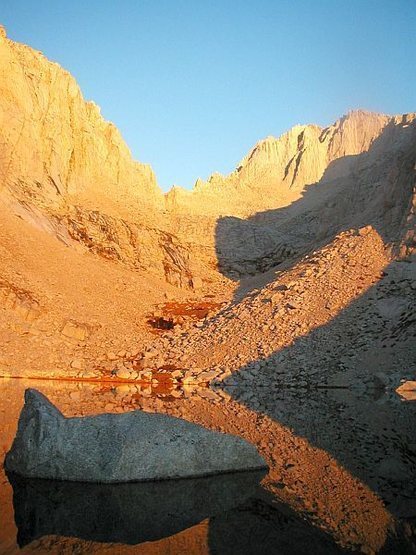 Allow *roughly* 6 hours from base to summit. Allow roughly 5 additional hours to descend from the summit back to the car at Whitney Portal.

From Iceberg Lake, scramble up and over the saddle between Whitney and Russell. Head north, picking up a faint climber's trail to the base of the arête. Several starts are possible.

A standard alpine rack will suffice. Hexes and/or tri-cams may be substituted for cams to keep the weight down. A couple double-length runners. Double ropes are nice, but not essential. There is no fixed gear on the route as I recall. 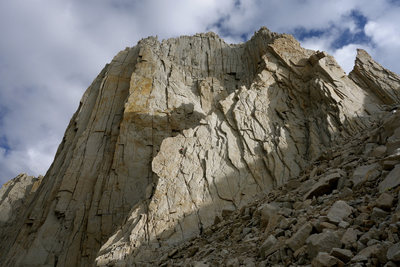 Fishhook Arete with climbers on P1 for scale. 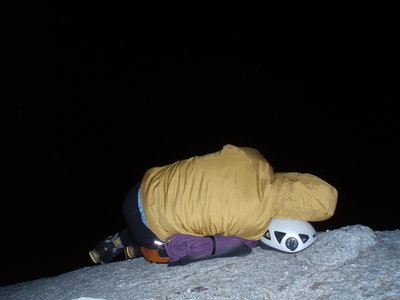 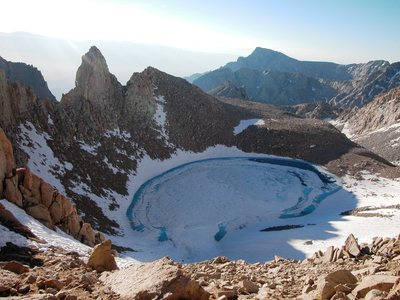 View looking down on Iceberg Lake, from the Whi… 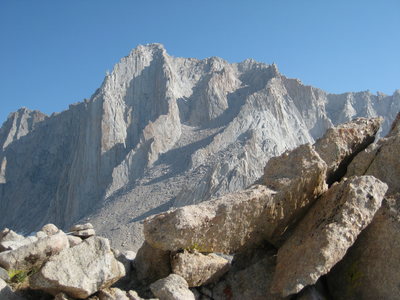 View from the Whitney-Russell pass of Fishhook… 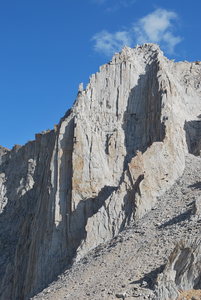 A picture of Mt Russell from the saddle near Mt… 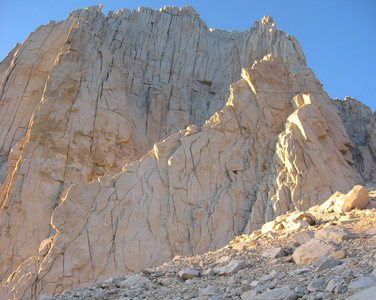 View of the base of the route. The start is on… 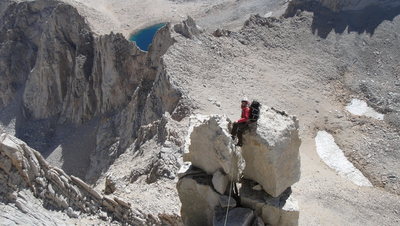 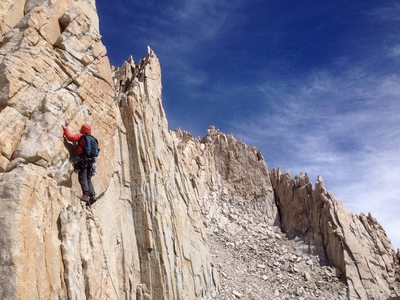 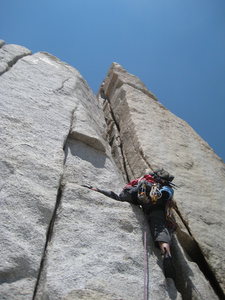 Duke leading up the 5.8 chimney. 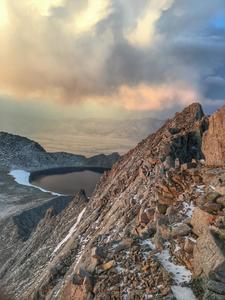 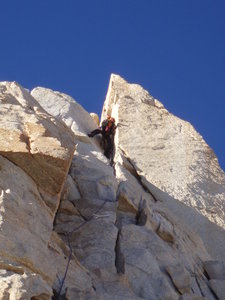 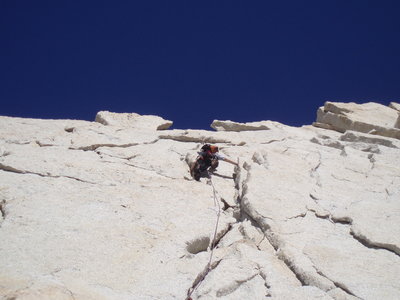