Approach the East Face of the Old Woman and look for a line of bolts on the south end of the south slab. After one bolt, two lines diverge, one straight up, and the other wandering to the right. Judas goes straight up past two bolts total, to reach a right leaning ramp, from which you can either move a few feet right and continue on Toe Jam (5.7, and recommended, but likely crowded) or continue up and onward to the rap anchors above Chongo Bolt Route and Bearded Cabbage (harder).

The crux of this route for me was right off of the ground, getting into position where I could comfortable place gear. I saw a team of climbers just before we were there standing on each other's shoulders to get established on the line. I guess that should have been a clue that the start was difficult. There was one additional friction move up higher that I found difficult. In the attached picture, the line is essentially where the climber is rapping off.

I did not find this climb as fun as many of its nearby neighbors.

This climb protects with 2 reasonably good bolts and a few cams, from .75" to 3". The larger pro is for when you join the route Toe Jam, up top.

This climb is not rated "S" in the Vogel book, but I have rated PG. The route is protected well enough for the bulk of the climbing, but the first few moves are bouldery and could produce an ankle-twisting/breaking fall. I protected relatively soon on a TCU, but it was not a textbook placement, and a fall (even if it held) from below the first bolt still could have been bad. 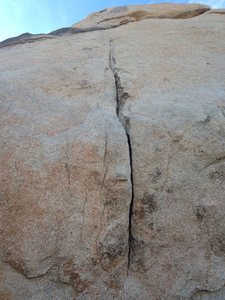 thin, bulging crack at the start of Judas 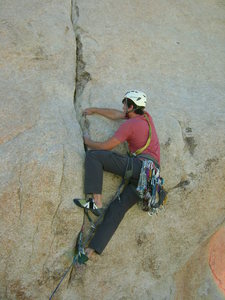 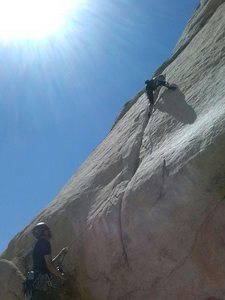 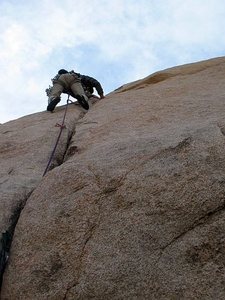