Texas Canyon, located in the high desert, between Santa Clarita and Aqua Dulce, consists of a collection of large conglomerate domes, isolated rock formations, and boulders nestled in the rolling hills of canyon country in NW Los Angeles County. Texas Canyon or Table Rock, the USFS designation, and the nearby Rowher Flats OHV Area are managed by the USFS, in cooperation with Los Angles County, and the State of California. Texas Canyon lies at 2500 ft in elevation. Currently, Texas Canyon hosts 160+ climbing routes from 5.0 - 5.13b. Most routes are bolted sport routes, and require only quick draws and lead to Fixe rings, chains, or shuts/hooks. A 60 meter rope is useful in climbing and descending most formations, some up to 200 in height.

The use of the Texas Canyon/Rowher Flats area spans several thousand years when local springs and the diverse landscape provided sufficient water and food to support the Tataviam Indian village. The area has been popular with OHV enthusiasts and rock climbers since the early 1960s, as evidenced by old rusty bolts and fixed pitons on some of the formations. Loomis, Leventhal, and Draper began putting up routes as early as 1992. Savage established several moderate sport routes between 1998 - 2000. Many of the moderate lines were filled in by Chapman and Neal from 2010 -2014. The area was closed for eighteen months, due to the October 2007 Buckweed Fire. The climbing at Texas Canyon can be characterized as bolted sport climbing on abundant pockets, knobs, and inclusions or weathered cobbles protruding from the surrounding rock. Climbing varies from low angle slab to steep overhung faces. The area has become popular due to the range of quality, well protected moderate routes and the short approach. Climbing is possible year round, with the exception of the coldest and hottest days. A cautious approach is advised as the conglomerate is friable and hand and footholds frequently break. Use of a helmet can not be overemphasized, especially for belayers.

An article in the Southern California Mountaineers Association (SCMA) Cliffnotes (August 1999), by Savage, provided the first documentation of climbing routes at Texas Canyon. Other guidebooks to Texas Canyon include; Best Climbs Los Angeles by Damon Corso (2014), Southern California Rock Climbing, Vol. 2 by Tom Slater (2013) and Southern California Sport Climbing, 3rd edition by Troy Mayr (2004). While these S. Cal guidebooks provide basic directions, approach information, photos, and rudimentary route topos, none of these guidebooks is comprehensive or current.  The best guidebook is Texas Canyon The Climbing Guide by Pam Neal with Ben Chapman (2019).  You'll need a copy of this last one since there is no cell reception at the crag to look things up on MountainProject on your smart phone.

THERE ARE NO TOILETS AT TEXAS CANYON, so consider your impact on this fragile environment.

The first time you do a number 2 in the wilderness, it’s intimidating. You’re out in the open, with the bugs and the poison ivy, clutching either a few precious squares of toilet paper or a pile of rocks and (hopefully smooth) leaves. Keep at it, though, and you’ll find it better faster than you think (especially if you can find a spot with a view). Learn the correct way to do your business in the wilderness and enjoy the experience with these tips.

The Gear for Your Rear

Start searching for your spot before you have to go—trust us, you don’t want to wait until your situation is desperate. LNT recommends popping a squat 200 feet—about 70 steps—from water or trails (don’t get lost). Find a private area with loose, diggable soil. Bonus points for good views.

Your cathole is your personal, single-use toilet. It should be 6 to 8 inches deep and 4 inches wide. Squat low to the ground for optimal aim—hang onto a tree trunk if you need a little support. Pack out your toilet paper in a sealable bag or place it in the cathole if local regulations allow (TP degrades quickly in wet, humid climates, more slowly in dry ones, and not at all in the desert.)

Cover your poop with the dirt you removed from the cathole. Make it look like you were never there. Remember, your trowel should only touch dirt. Wash or sanitize your hands and revel in that weightless feeling.

Some sensitive wilderness areas such as high-alpine ones, arid deserts, or high-traffic parks require the use of WAG bags instead of catholes. Check local regulations for the area where you’re camping and follow the instructions on the WAG bag’s package. Always use outhouses and pit toilets when available to minimize impact on the land.

Perhaps this should be the norm for those that can't resist.

Texas Canyon is an easy 30 minute drive north from the San Fernando Valley. Take the I-5 or the 405 north to Hwy 14 toward Palmdale/Lancaster. Once through Santa Clarita, exit Sand Canyon Road and turn left and continue two miles on Sand Canyon Road to the T-intersection at Sierra Hwy. Turn right on Sierra Hwy and go ~ 5 miles to Rush Canyon Road. Turn left on Rush Canyon Road (5N13), which is marked as Rowher Flats OHV area. It quickly becomes a graded dirt road. Continue on Rush Canyon Road for 1.8 miles to a gated fire road at the ridge. Park and follow the fire road as it meanders 1/4 mile to a diagonal cutoff on the right, to the now obvious crag. It is permissible to park on either side of the road, but be cautious of parking too near the gate (no parking signs). 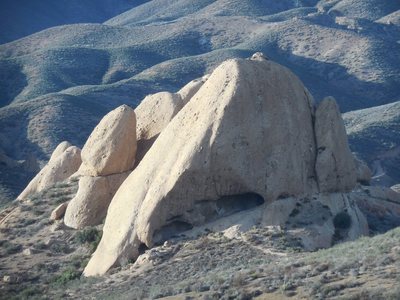 Texas Canyon from the southeast. 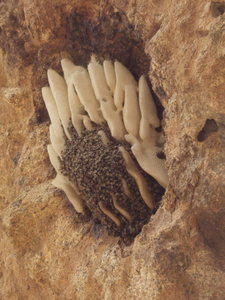 The hills are alive with the sound of bees and… 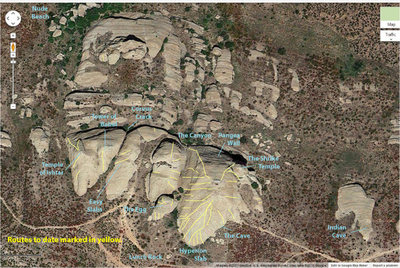 A quick and rough guide to known routes at this… 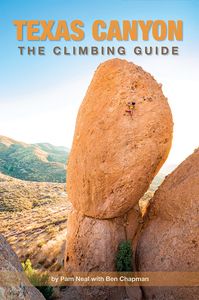 Proud to announce that the new Texas Canyon gui… 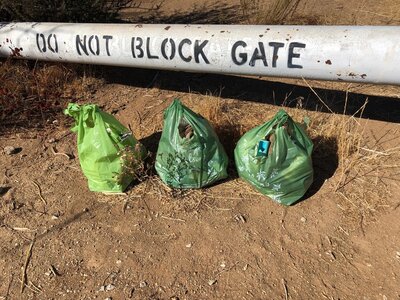 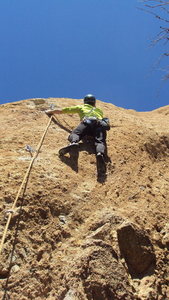 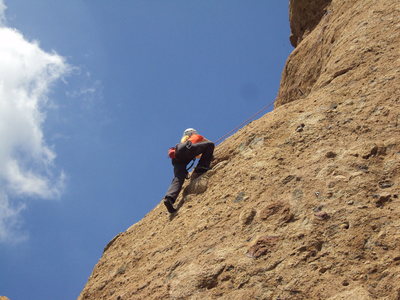 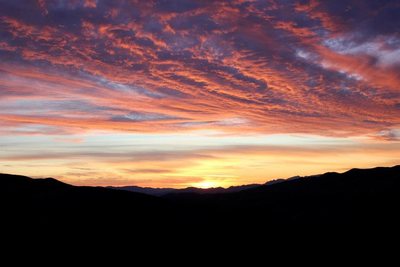 A beautiful sunset to end a great day climbing… 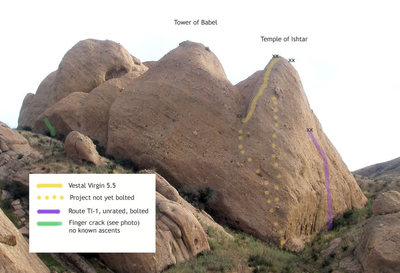 West end of the main formation at Texas Canyon.… 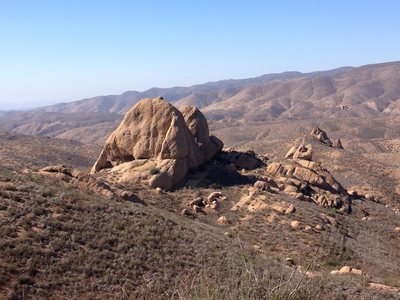 View from the short hike in Texas Canyon, CA ph… 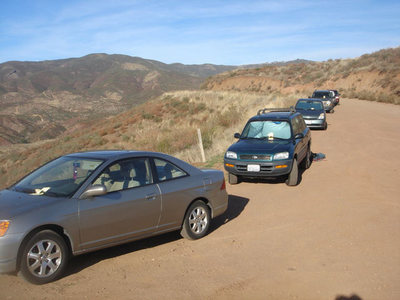 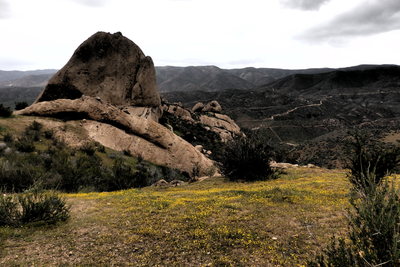 A "mood" shot of the rocks.

All Photos Within Texas Canyon