This version of Free at Last from the new guidebook is a bit of a rework that combines pitches from the original full Tatoosh, Free at Last, and Voyage of the Majestic Glass Eyed Tuna. This route is packed from top to bottom with varied, thought provoking crack climbing that will force you to pull on your thinking cap.

Pitch 1 (5.10b, 35m): Start up the modern version of Tatoosh (well documented here: mountainproject.com/route/1…). Instead of belaying at the normal anchor for Tatoosh under a large perched block, continue up 10 feet of dirty terrain and belay off a tree. Alternatively, split off about half way up, climb up the original pitch two of Tatoosh and belay at the anchors of WATWB/Just Say NO2.

Pitch 2 (5.9, 35 meters): This pitch is the lowest quality on the route due to some mandatory dirt scrambling, but it still has a good bit of fun crack climbing. Head up a clean, low angle V-slot, with a thin crack in the back. Hike up some dirt and climb some creative sequences up cracks in the corner to the next belay.

Pitch 3 (5.10b, 35m): This pitch has quite a few cruxes and felt more sustained than pitch 4, but it's all there. Begin by heading up the corner to the first crux at the obvious roof. This is definitely harder than 10b if you opt to burl through it, but there are some sneaky tricks to it. A good stance above the roof separates the next crux, which will require even more creative thinking. Once at the base of the overhanging ice cream cone feature, head up and left to the third smeary slab crux, protected by a bolt, and finally up and right along an easy ramp to the belay.

Pitch 4 (5.10d, 30m): Just when you are getting used to the funky crack movement, this pitch slaps you in the face with some hard face climbing past two bolts. We were a little confused by the bolt placements here. Start by mantling into a little boxy ledge and clip the first bolt, then climb straight left to a blocky crack. I placed a red metolius here to protect against a pendulum as I moved up to the next bolt, then reached down and pulled it out after clipping. Continue up to a right leaning crack and then to the base of the imposing V-slot. This slot is the real money climbing of the route, but I would HIGHLY recommend taping up to get the most enjoyment out of it. At the top of the slot, clip a bolt and make a few last moves up and right to the chains. Give your thanks to Saint Francis before heading down!

Descent: Rappel the route with a 70 meter rope. It works best to use the anchor of WATWB/Just Say NO2 for the last rappel, which is climber's right of the couple trees at the top of the first pitch. The rappel getting there is a rope stretcher.

Doubles from blue metolius to #3 C4, and a few small nuts. You will be climbing parallel cracks of every size on this route. Bring at least 3 alpine draws to minimize drag and a handful of quickdraws for the occasional bolt. 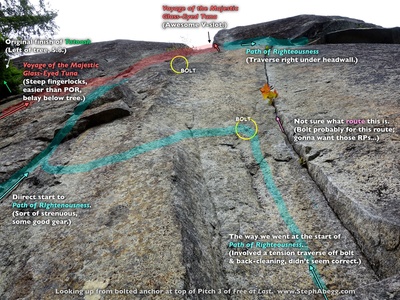 Pitch 4: The various options of where to go. 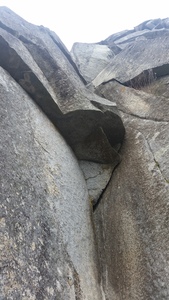 Looking up pitch three. The route goes to the… 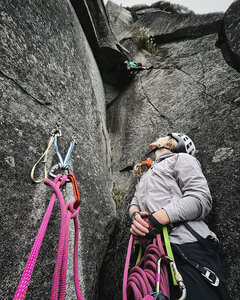 The roof on pitch 3 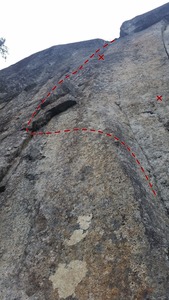 The best way we could find for the beginning of… 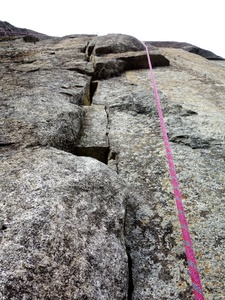 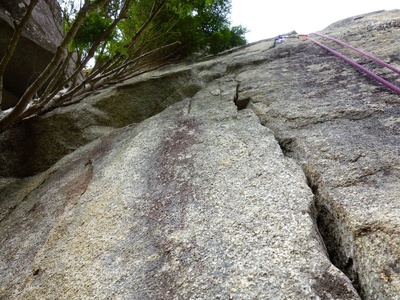 Pitch 4: Looking up Voyage of the Majestic Glas… 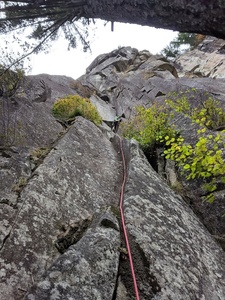 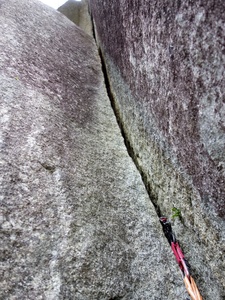 Splitter hand/fist crack up a groove high on Pi… 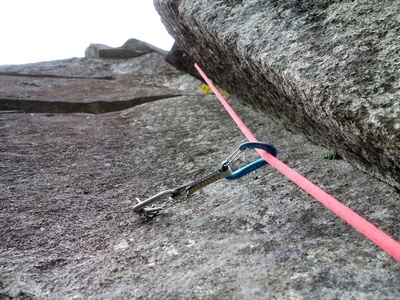 Bolt just before the slab/face section high on… 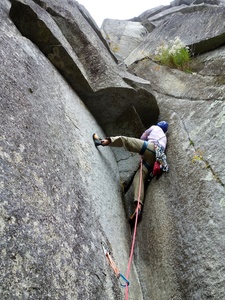 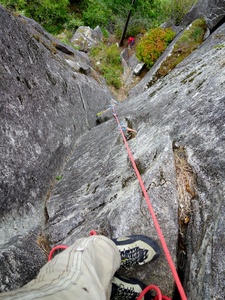 Looking down from the top of Pitch 2. The climb… 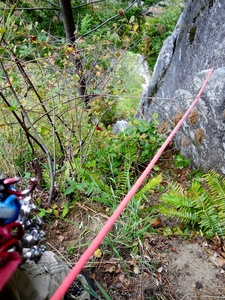 A bit of vegetation on Pitch 2.

More About Free at Last