Routes in The Dead Snag

This is the left-most of the three parallel thin crack systems starting off a ledge about 30 feet off the ground on the north face of Dead Snag crag. Social Engineering starts by face climbing straight up past the left-most of the pair of bolts that protect access to the ledge (the right-most bolt marks the start of Call Me Slim). From the ledge, take the broken-looking crack on the left to get established in the nice thin crack above. Finger jamming leads to a break below a bulging bolt-protected headwall. Follow the bolts to chains. Between the second and third headwall bolt, you'll likely want some gear -- see below.

Social Engineering is about 25 feet right of Ad Lib and 20 feet left of the large chimney/gully that separates Dead Snag from Talk Buttress. The best approach is to follow the well-trod Challenge Buttress Trail past the east face of Challenge toward Dead Snag and Steorts' Ridge.  About 50 feet before reaching the base area of Steorts', a talus field will appear through the trees to the right (west) of the trail (the talus field is nestled between the north face of Dead Snag and the west face of Talk Buttress).  A short trail heads into the talus field then traverses right to the talus field's right margin, where the trail turns up a few short switchbacks then goes back left (under the start of Direct North Ridge on Talk Buttress (see that page)) to the top of the talus field and the base area for Social Engineering and its neighbors.

To descend Social Engineering, lower or rap from chains with a 70 meter rope.  A single 60 meter rope will not make it.

Set of wires and cams to a gold Camalot (no. 2), draws, and a few long slings. Consider a few extra cams in the finger size. Save a blue (.3) and grey (.4) Camalot for above the second bolt on the headwall. 70m rope likely mandatory to lower. 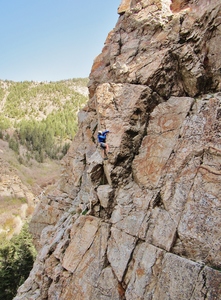 Brad getting ready for what some say is the crux 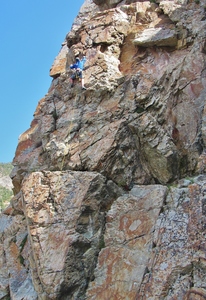 Closing it out, Brad on Social Engineering 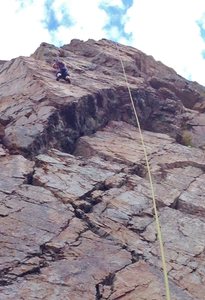 Janie seconding on the FA