Another spectacular route that doesn't form every year. It is the obvious ice pillar that breaks the sheer wall right of Power Play.

P1 WI3: Go up an ice slab to a right-leaning chimney. Squeeze up this, then go up a slab, angling left at the top to some trees on the left, about 25' below and left of the base of the pillar. 120'

P2 WI5: Go straight up the pillar to the top. The pillar usually touches the wall in two places, offering rests. Halfway up, there's a bail option on the right if the top proves too much. 80'

The two pitches are often linked.

Ice screws. There are some rock placements midway up the pillar on the left. 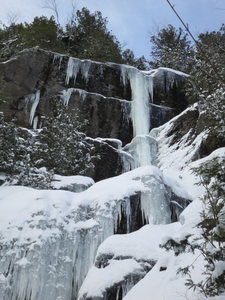 Big Brother, from the P1 belay. 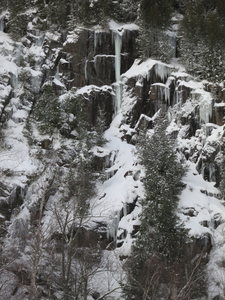 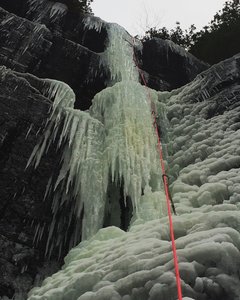