Badman takes off on overhanging jugs, crimpy pockets, and under-clings for three bolts. The first crux is an amazing, desperate, dynamic problem from a good undercling to a nasty two finger pocket (clip in the meantime), then a powerful pull from the pocket to another two finger pocket gaston. Once you have the second pocket, move your feet up, maybe gaston with your right hand, and get set for the exhilarating throw to a big flat jug.

The moves flow more amicably from here until you hit a second crux: reach out left, finger-lock in a small, sharp (foot)hold, step high with your right, and snag the sloper. I consider this the second of three cruxes, but maybe others don't share that opinion.

For the final crux, establish on the powerful underclings, boldly trust the feet, and stab high, with your right hand, into a positive two-finger pocket. There is shitty sloper-crimp-thumb-catch that works for an intermediate, but I wouldn't expect much. While significantly more powerful than the first crux, it doesn't require a dyno, so it is higher probability for me.

From the pocket, dance up through a delightful series of huge pockets, with long reaches in between. This gives those big muscle groups a workout, and lets the fingers rest a little.

Expect 5.11 climbing for a couple of bolts, and then a couple bolts worth of medium/hard 5.12 before you make it to a rail that leads to the anchor. These moves are actually quite technical and sequential. The toughest moves involve locking off on a right hand pocket (awkward for me), grabbing a crappy left hand duo, and working the feet up high to double drop knees. Bear down on the beloved triangle hold with the left hand, and then shimmy yourself over to the right to grab a good hold. You'll have to lock this thing off to your hip, so get your feet high, and stab your left hand into a tight two finger pocket that feels miles away. It's hard to say, because I'm wrecked by that point, but the headwall could be 12d.

As hard as each of the problems is, the hardest thing is that there aren't any rests until you hit the big pockets at sixty feet. At that point, you still have thirty feet to go. Rhythm is everything.

It sits directly right of the new beauty, Shoot 'Em Up, which is just downhill from Aggro Monkey. 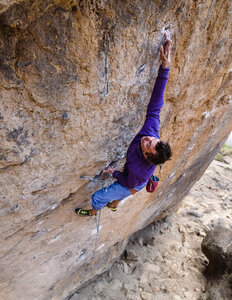 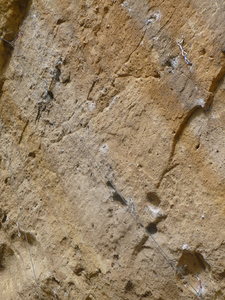 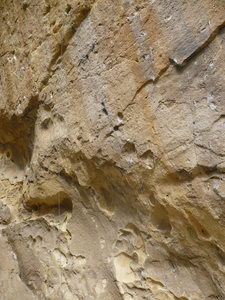 Rope hanging through the starting holds, and th…