Pitch 1: climb straight up the corner, passing a difficult section at an obvious bulge. Pitch 2: continue up the crack system to a good ledge beneath a prominent chimney. Pitch 3: climb the chimney to an overhang at its top, then belay on a ledge about 20 feet higher.

At this point the crack system has diverged from the main corner and reached an impasse beneath an unprotectable varnished headwall. The fourth pitch begins with a traverse right and up to gain the main corner at the lip of a giant overhang. A committing move leads to a position of momentary security in the corner above. Difficult climbing continues for another 40 feet until the angle begins to relent. Easier climbing then leads to a large ledge on the very crest of the buttress.

Although we explored another pitch up the main crack system on the upper buttress, the climbing was loose, dirty, unpleasant, and not recommended. Especially because you are already standing on the walk-off descent ledge.

Descent: There may be better ways to do this. . . We walked west on the ledge system until reaching the first drainage. We walked down and right (east) to a rappel from a large pine tree on the right edge of the drainage. Two double-rope rappels led to the canyon floor.

A few other descent notes. Although our rappel route was workable, it did not achieve the status of "pleasant" or "relaxed," and I would readily consider other options. Going straight down the drainage did not look like a good bet. It turns into a dank chimney littered with shredded rope cores signifying an ancient epic. Somewhere in this area I have heard of a hiking/mountaineering route that leads over west into the bowl beneath the Rainbow Wall. I have not done this, and do not know precisely where it goes. However, it seems like it might be a good way down if it could be easily reached. (And as we entered the descent drainage, we saw a few ducks, so it is possible we were right there. It may be necessary to go a little uphill to reach the bowl, and we were in a downhill frame of mind.)

Historical notes: This is a prominent line, and I am sure many have wondered why no route has been recorded here. In fact,the first three pitches have likely been done numerous times dating back to the 1970s. We encountered a lot of old bail gear. The top of the third pitch is kind of a dead end. The continuation of the crack system becomes an unprotectable RURP seam. It is climbable (we top-roped it), but it is hard enough that the sometimes crispy rock, and the lack of protection become serious factors. The corner on the right looks outrageous, but ultimately tiptoes slightly inside the boundary of the insane.

The route is excellent, and despite earlier activity, has remained nameless. One common element in the naming of climbing routes is reference to the scorpion as symbol of "the sting is in the tail." Surely, this concept applied to this route with its spectacular top-pitch crux. But we wanted something better... The word "thagomizer" refers to the bony tail spikes of the stegosaurus. The word has been recently adopted by paleontologists, inspired by a Far Side cartoon from 1982. The cartoon shows a caveman giving a lecture to a bunch of other cavemen. With his pointer he is indicating the tail section of a diagram of a stegosaurus, and he is saying to his assembled listeners, "Now this end is called the thagomizer, after the late Thag Simmons." Scientists adopted the term into their formal lexicon. An image of the cartoon, and full explanation can be found here:

Upstream from the Cloud Tower area, the south side of Juniper Canyon is dominated by an obvious buttress separating the downstream walls from the wide bowl beneath the Rainbow Wall. The buttress, in turn, is split by an obvious crack/corner system that reaches tantalizingly close to the top. This is the route.

Probably the easiest way to approach is to hike up Juniper Canyon to the top of the steep section. As the main canyon begins to level out, a brushy gully leads up through the band of cliffs on the left. Follow this to its top and scramble right (west) to the base of the main corner.

Protection: A full rack, with cams to 6". A hybrid Alien is useful in one of the flared sections of the upper crack. 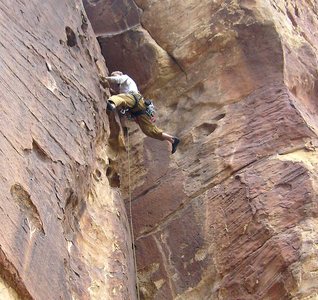 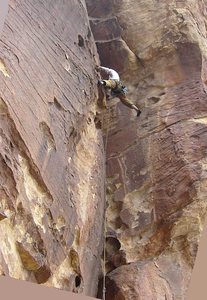 Climbers deficient in vision and boldness can s… 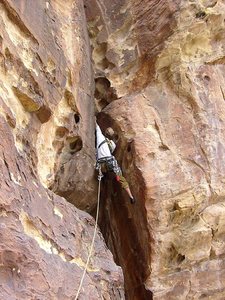 Cranking into the corner. 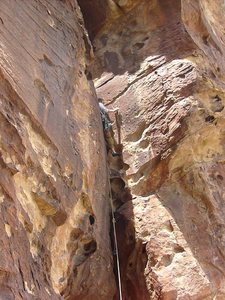 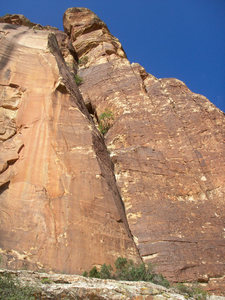 The route from the ground. The sweeping roof o… 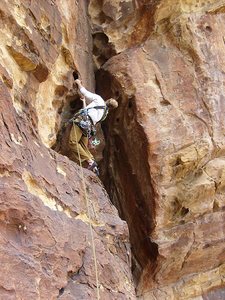 Karsten peers into the exit crack. At this poi… 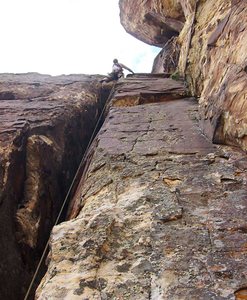 At the top of the chimney on the third pitch.… 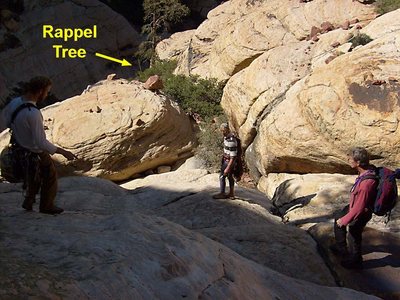 The indicated tree might be the one from which… 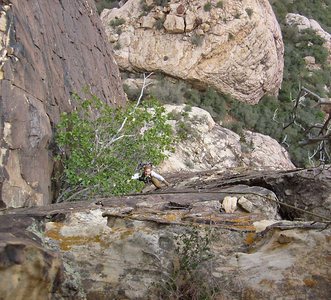 Looking down the second pitch. 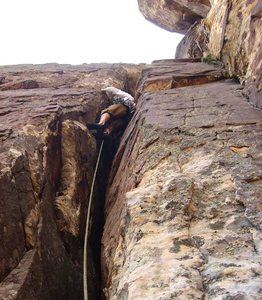 The squeeze chimney at the start of pitch 3. 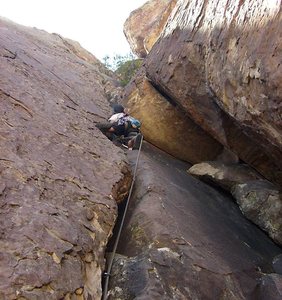 Pitch 2 starts with a small overhang. 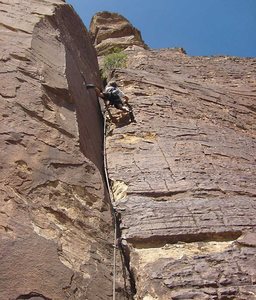 The crux section of the first pitch.