Routes in The Sno-Cone Cave

This is basically the route to the right of Mariscos Lambada with two variations to get to the big roof crack (I think the left is harder and on better rock). Neither are harder than 5.10 to get to the roof and there are also two sets of anchors there.

Once you're standing on the ledge under the business, lean out to the crack (exciting). Flip around and get crankin on this fun, airy boulder problem. The anchors are just after turning the lip.

To me, this feels like an easier and less-scary version of Yosemite's Separate Reality (11d), but the guidebooks have always called this 12a.

Downdraft was the first "5.12" I ever laid eyes on when I was 13 years old, toproping the 5.8 on this wall. I saw some burly looking dudes falling off of it, and thought that it would be amazing if I was ever able to consider climbing something that hard. Not too long ago I climbed this route barefoot -- but I still get a flutter in my heart when I rack up for it! For me, Downdraft has remained the psychological epitome of 5.12a.

If it was more sustained, and not so out of the way, and such a biatch to clean, it would be classic. However, on a hot, crowded morning, it can sure be a lot of fun.

As far as the FA info, my friend Bill said he bolted the three lines in this particular section back in the day, but that the first guidebook gave credit to someone else and assigned different route names. He said he bolted Mariscos Lambada (I forget his name for it) for his wife and daughter.

The route starts off the big, triangular block next the the wall.

12 draws should get ya there. A 60-meter rope might be necessary to lower from the top anchors. 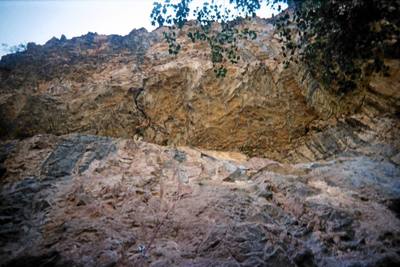 Dave Sims leans out to clip the first bolt in t… 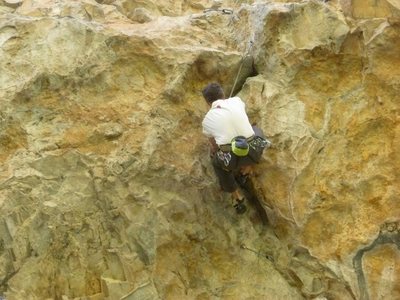 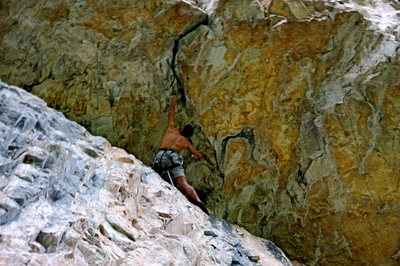 Chuck Lepley reaching out at the overhang. 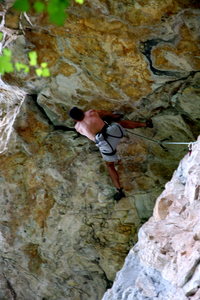 More About Lever Action (not Downdraft)