HISTORY: The FA of this route was done in 1943 by Bill ("William Lowell") Putnam and Brooks Dodge in 1943. (Brooks was the son of Joe Dodge, who ran the AMC's Pinkam Notch camp from its inception in 1922 to 1959 [1928-1959 as Manager of the Hut system]), probably (?) just before Bill went to Camp Hale, Colorado to train the 10th Mt Division. Bill would later take part (as a Pvt.) in "removing" the Japanese from Kiska Island (Alaska) the only US territory Japan occupied during WWII. Here his climb to the volcanic high point of the island took a bit longer than anticipated and resulted in AWOL, the "punishment" for which was to lead the entire company up as a training exercise the next day. During action in Italy in 1945 with 10th Mt. Division he took shrapnel to the chest (lungs) and missed the action at Riva Ridge and Mt Belvedere, but (now as a First Lieutenant) took part in the final push into northern Italy. After the war he would make the 2nd ascent of Mt St Elias in Alaska, lead many trips to the Adamant-Austerity range in the Selkirks of British Columbia, and serve as both President and Honorary President of the American Alpine Club.

Climbing up the middle of three cracks on the main face, Standard Route is a classic. Though it can be done in one push, most prefer to break it up into 2 pitches. The first belay is usually about 2/3 of the way up the face on a small ledge. This allows the belayer to always be within sight of their leader.

One can choose to either follow the crack system to the summit, or use the massive face holds. Either way, engaging climbing awaits all the way to the summit- just play it to your strengths.

Standard Route starts on the far left of Square Ledge by a prominent corner leading up the the middle of 3 fingercracks. Anchor to one of the two Birches.

Standard Route will pretty much take anything you have on your rack. It protects quite well using anything from wired nuts, to aliens, all the way up to the blue camalot. Needless to say, your standard Catherdral rack will work famously. 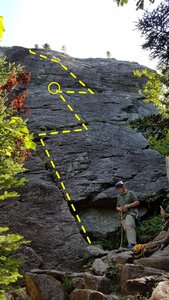 My best guess of the line for Standard Route. T… 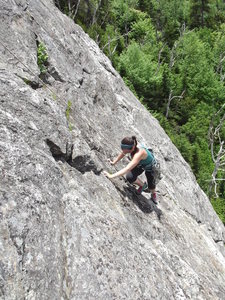 Emily getting to the top 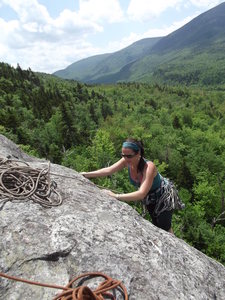 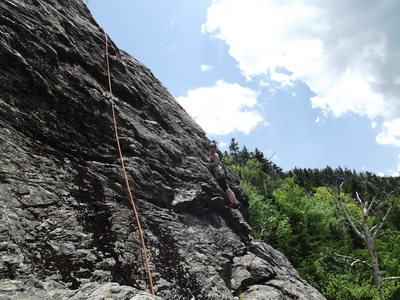