On the south face of Sobo, about 100 feet to the right of the routes Cruising For Bulgar and Good Cleavage, there are a few more routes. These are distinguished by their position relative to "the pouch" a kangaroo-like pocket 20' deep and 30' wide and 4' think formed between a huge flake and the main wall. About 50' right of Good [Cleavage], and 20' up and left of the pouch, there is a tree growing on the wall, 15' from the ground. Climb up to the tree and then up a crack system above the tree. When the crack terminates at some underclings, put in some gear (cams) and go up and right 10' to another seem (crux, 5.8). Climb the seam (poor protection) up to it's end. Rather than pull up to the dike above for a messy traverse, complete the climb by staying some 10' below it and climbing up and left on a series of shallow pockets for 50'.

The climb ends when the pockets run out and you move up onto the dike to belay below a small roof on stoppers and cams.

A fall from high on the face would certainly result in serious injury or death, although the climbing at that point is 5.6. This section could be avoided by moving up to the dike (5.5?) instead of climbing the pocketed section. After a belay, scramble and climb, following the dike up and left to the top of Good Cleavage or Cruising For Bulgar, then descend as described for those routes.

A standard Light Rack. The top of the route is easy, but quite runout up top. 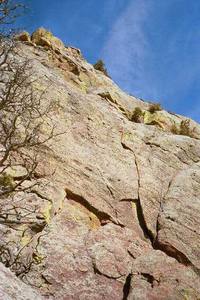 'Marsupial' climbs the crack just to the right…