This area encompasses the big lake basins north of these two trailheads; Rae Lakes, Sixty Lakes and Gardiner, the scenic approach to Golden Trout Lakes and Dragon Pass, plus the immaculate dome west of Charlotte Lake which can also be accessed from both trailheads and the fabulous 2000 foot wall on the north side of Bubb's Creek Canyon. Rae Lakes and Sixty Lakes are famous for their beauty, and the former is a very popular spot on the famous backpack loop starting at Cedar Grove. Charlotte Lake is also a very popular camping spot, and there's a backcountry ranger hut here.

While Rae Lakes are very popular Sixty Lakes can be empty, perhaps because it's harder to get to, but it's well worth the trip, it's very remote and beautiful with Mount Cotter and Mount Clarence King being spectacular peaks. Further west lies the even more remote Gardiner Basin.

This whole area is infamous for bear activity.

Western Trailheads
Cedar Grove - take Hwy 180 through Grant Grove Village to Road's End - a long and scenic drive, if it isn't dark. From here you can access Road's End and Bubb's Creek which will take you to Charlotte Creek and then cross-country north to camp spots beneath Charlotte Dome - you can also continue farther east to hook up with the faded Gardiner Basin Trail. Sphinx Lakes and Avalanche Pass is accessible by a trail at the top of the switchbacks heading up to Bubb's Creek. Continuing along the Bubb's Creek Trail past Charlotte Creek will get you to the Bubb's Creek Wall.

Eastern Trailheads
Kearsarge Pass: Take the Onion Valley Road west from Independence to the large parking loop at the trailhead (there's camp sites here too). Kearsarge Pass allows quick easy access over the main crest, for Charlotte Dome head down and past Charlotte Lake, do the same for Rae Lakes and Sixty Lake Basin, but stop and camp at the lake because the next day you'll be heading over Glen Pass, then either down to Rae Lakes or over Sixty Lake Col to Gardiner or Clarence King.

Either way and whatever your destination these are long and arduous hikes, especially toting climbing equipment.

Golden Trout Lakes/Dragon Pass: From the Onion Valley Parking Loop there's a trail which runs north, up into the Golden Trout Lakes, and Dragon Peak basins, from the loop there's a big waterfall, the trail starts on the Kearsarge Pass trail, then splits right and heads up old scree and passes this on the right, then crosses it's top and follows more steep terrain until a depression is reached, here the trail crosses the creek and back again for a short distance to avoid big boulders, after this it slightly uphill until a meadow is reached, Golden Trout Lakes is to the left and Dragon Pass is to the right. This meadow is very scenic, with large towers to the north, there is camping at the two lakes beneath Dragon Peak, these lakes are reached from the meadow by crossing a small creek and heading towards the trees on the other side, make sure you stay left of these trees to hit the trail. For Dragon Pass head for the low point to the right of the large square tower right of Dragon Peak, the pass itself is a high plateau to the right of this, followed by a long scree descent to Dragon Lake and thence Rae Lakes - don't attempt the obvious low point between Dragon Peak and the square tower. This offers a one-day route to Rae Lakes, but it's not easy. A better alternative may be Gould Pass, which has a similar approach to the South Ridge of Dragon Peak.

The trail also give access to Sardine Canyon via the 12,000 foot pass west of Kearsarge Peak, which is a ski mountaineering objective and one of the coolest ski descents in California.

Permits:
For the western approaches are available here.

For the eastern approaches are available here. 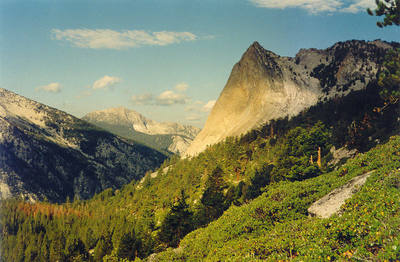 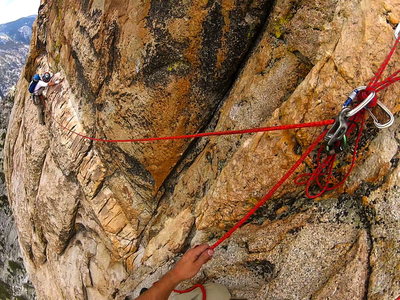 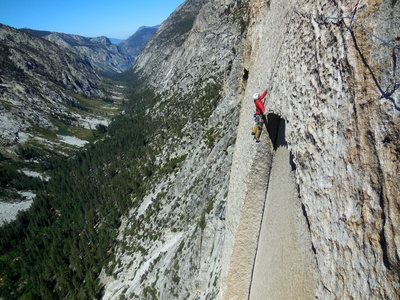 Brian begins to follow the 9th pitch - the key… 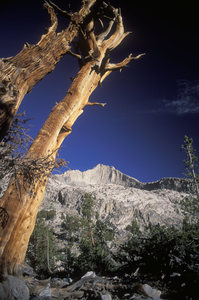 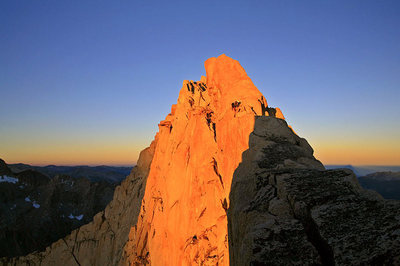 First morning light on the SE face of Mt. Clare… 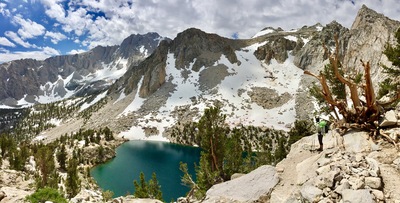 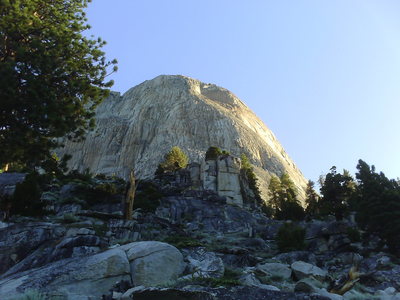 Nearing the end of the westside approach 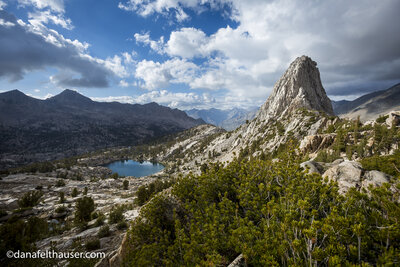 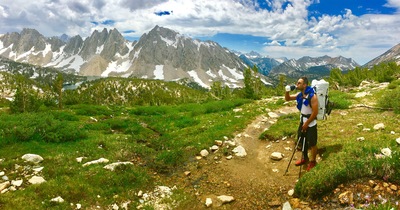 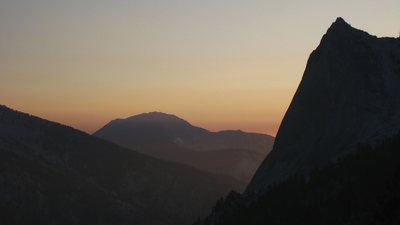 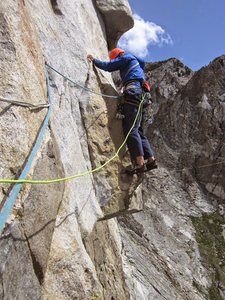 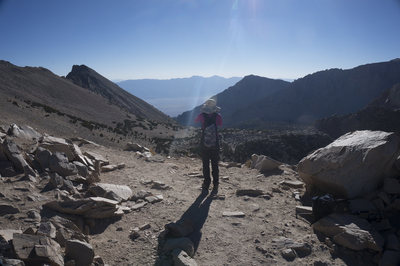 Looking back to Onion Valley from Kearsarge Pass.

All Photos Within 12 - Kearsarge Pass to Cedar Grove