Routes range from 5.4 to 5.12. If you're stout enough to make the 5600'+ vertical, six-mile long grunt, the climbing will more than reward your efforts. For best effect, plan on spending 3 or 4 days and sampling a half-dozen or more of the best climbs. Don't leave without doing the "triple crown" of cirque climbs... Triple Overhangs (5.10a), Vertical Smile (5.10a), and The Undone Book (5.9+ R). All three are correctly given four stars.

Among the several approaches, each has it's pros and cons, but it boils down to this: the hike sucks. Lone Peak is a big ass mountain. People get lost hiking it every year. If you and your partner haven't done the hike, EXPECT to get off route at least once, and be alert for when you do.

Alpine: This hike is shorter than some, and DOES have water. Which is good, because it's south facing and hot as hell.

Jacob's Ladder. Trailhead is fairly easy to get to, pretty direct, but steep and a little loose/dirty (especially coming down). No water until the entrance to the cirque, but you're probably least likely to get lost on this trail. This trail also has the least elevation gain / highest trailhead.

Draper Ridge. Can be accessed directly from the Corner Canyon Rd, at the wide section of the road, about 2 miles from the bottom, with a scruffy cliff band that looks like a small quarry at one time. This is just before a trail sign on the RIGHT side of the road for the Rattler bike trail. Long, steep at start, loose/dirty, no water. Sure, why not.

Cherry Creek. This is a fairly pleasant hike (if a 5500 foot vertical hike can be described as "pleasant"). There is one spring off the trail just before it connects to Draper Ridge. If hiking in the morning, this trail is SHADY for about the first half. Also, this trail is a little friendlier going DOWNHILL.

Finally, I recommended NOT leaving a car overnight at any of the trailheads. Nothing worse than hiking out to find your ride has been vandalized. Find a buddy to drop you off/pick you up. (If possible)

As far as the Corner Canyon Approach goes, here's my version:

Because most everyone knows where BCC and LCC are, I'll start there. Follow Wasatch Drive south from BCC or LCC. Stay on Wasatch as it meanders through the kings and their castles and ultimately turns west. After turning west, travel another couple of miles and at the first stop light, turn left onto Draper Parkway.

Follow Draper Parkway south until it also bends and heads west. At the first light after it heads west, turn left onto 1300 East.

Follow Pioneer Road east until you hit 2000 East. Turn right, and head south as it transitions from pavement to dirt.

I usually park about about 3 miles up this dirt road at an obvious pullout (the Falcon guide book has a couple adequate maps, but some good route-finding skills are a bonus).

Hump the packs on and head up the four-wheel drive trails to the northeast of the pullout. Look up the hillside and you'll see two major rock outcroppings. Both of these have trails leading up to them, but you ONLY want to head to the east-most outcropping, creatively called "Lone Rock".

By the time you reach this rock, you'll be covered in powdery dust and will start wondering what you've got yourself into. From Lone Rock, head north up the steep scrub-oak covered hillside, following a faint but visible trail. When you get to a steep ravine, don't descend into it, but follow the edge of the ravine east until you catch the trail that proceeds north again up the large ridge above you.

Follow the steep trail and switch-backs all the way up this ridge, and after your intestines completely knot up and come out of your throat, you'll join another trail that comes in from the west (this is called the "Draper Ridge Trail", which I've descended before and is NOT recommended).

As you head east on this trail the hike actually begins to be enjoyable. The scenery improves consistently until you feel as though you're in the Canadian Rockies. The trail is pretty obvious, and passes through a pine forest, then across a huge granite slab, and then up the drainage that runs from the cirque itself.

Where the trail becomes faint, look for cairns as they are plentiful. Once you begin moving up through the obvious talus towards the cirque itself, don't head north along another line of cairns. Stay eastbound and begin working your way over the huge boulders in the talus field.

Once you crest the talus, you'll see the meadow and the cirque beyond. Work across the boulders to the meadow, drop the pack, stuff your head in the icy water, and prepare for some truly outstanding routes.

Remember you are climbing/camping in a wilderness area, and please pack it ALL out.

A few side notes; the water usually only lasts until late July so climbing in late summer or fall requires packing water in. Try to tread lightly in the camping areas so the meadow can maintain its pristine nature. 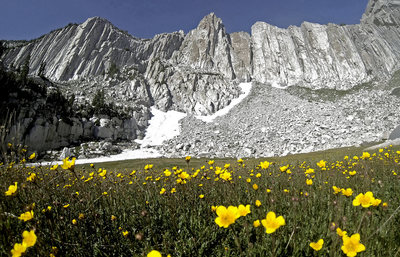 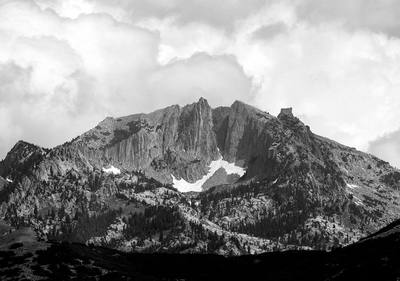 The Lone Peak Cirque from across the Valley. 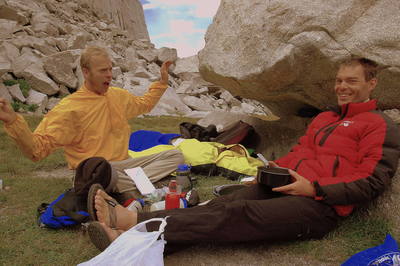 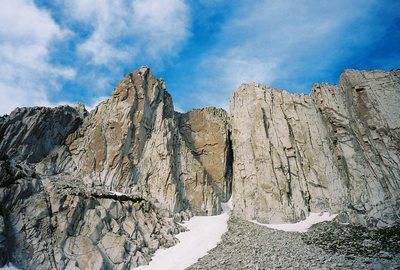 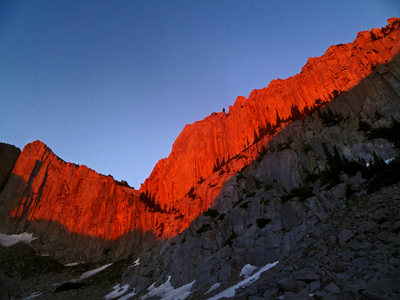 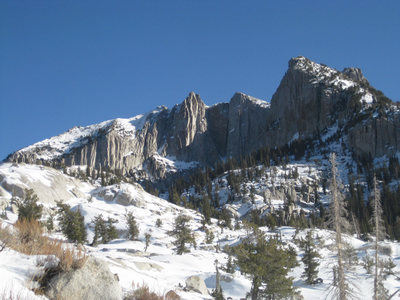 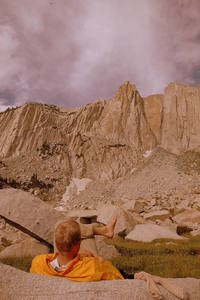 Andy in the Cirque 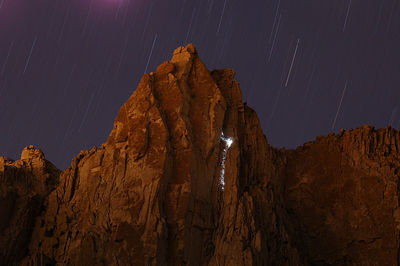 Climbing the open book by headlamp 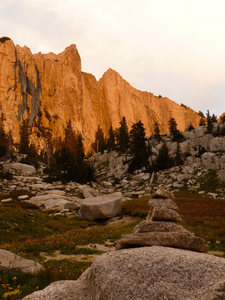 Lone Peak Cirque in the last light of the day… 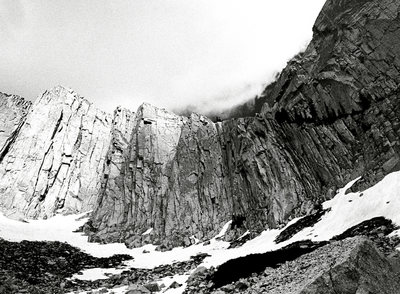 All Photos Within Lone Peak Cirque