Pitch 1 - The climb starts by ascending the buttress forming the left side of the couloir immediately left of the one that splits Torre De Mierda from Mount Morrison proper. Immediately start traversing left into shallow gully. A couple rock steps are passed before coming up to a 40' long slab. This is the crux of the climb. Follow thin cracks up the slab. Be aware the rock on this pitch is fragile. Beaks were key to protecting this adequately. 70m

Pitch 2 - Following the path of least resistance, climb straight up towards a headwall of rock. 70m

From here traverse left through various gullies and short bits of rock until finding a long continuous couloir (at somewhere around 160m from the base) without any rock steps that runs up to the Northwest Ridge.

The route ends on the Northwest Ridge of Mount Morrison. To descend, climb the ridge to the summit and descend via the East Face. Another option is to descend the Northwest Ridge and skip the summit. Head down loose 3rd class terrain until a large open couloir to skier's right (north) which should be taken to get off the ridge. This is very loose 2nd class talus or snow.

A conservative rack would consist of double in cams from .3-#2, a single #3, and a good selection of pins (knifeblades, arrows, and beaks). If confident on easy to moderate terrain, a better rack would be singles from .3-#3 and a couple beaks. Although not necessary, a screamer or two may come in handy as not all the placements are fantastic. 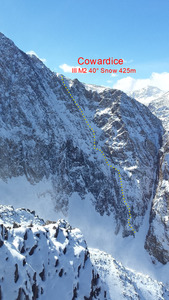 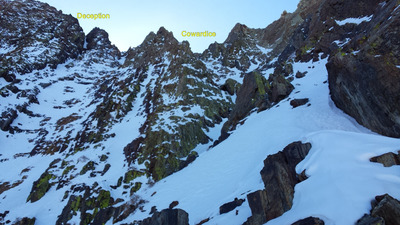 Deception on the left and the couloir that Cowa… 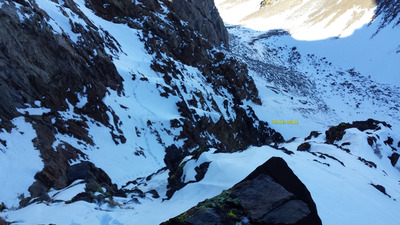 Looking down the first section of the route. Yo… 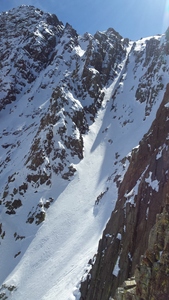 The upper couloir of Cowardice. 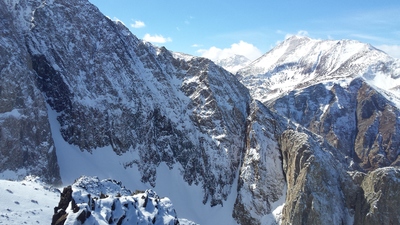 A wide view of the NW shoulder of Morrison as s… 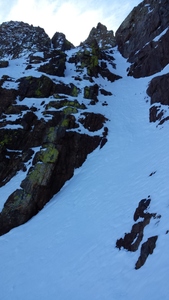 Typical climbing on the route. This particular…