The massive north face of Mount Morrison could be one of the most infamous faces in the Sierra. This is the face that earned Morrison the appellation "The Eiger of the Sierra". The face itself is nearly 2000' tall at its highest point and is split by the long and obvious north buttress.

The rock climbing routes on the north face, with only a few exceptions, take different lines to eventually join onto the prominent north buttress. The original route is the Northeast Wall and Buttress (IV 5.7) put up in 1946. It is a great introduction to the face and the best place to get familiar with the rock. Even today, it is a proud line that will inspire respect for the first ascent party. If you are looking for something more, the Witness Me! (IV 5.10) offers some of the cleanest hard climbing on the face or the North Buttress Direct (IV 5.8 A2) offers the longest climb on the peak.

Mount Morrison has some of the best winter climbing in the Mammoth area. The standout classic again was one of the very first routes on the mountain. The Northwest Couloir (III WI3-4 Moderate Snow), more famously known by the name of the Death Couloir, is probably the most storied route on the face. When this rare ice route forms, it is some of the best alpine ice climbing in the range. Routes such as Psychopomp (IV M4+ Steep Snow) and Deception (III M5 Steep Snow) offer more sustained winter climbing.

The north face is composed of many distinctly different types of rocks of various quality. The rock is very unlike the typical High Sierra granite that climbers swoon over. Protection is often hard to come by on Morrison rock and requires the climber to be creative and still confident above marginal pieces. A typical rack for Morrison focuses on small cams in the finger sizes and smaller with few to none above hand size. The cracks are oddly parallel on Morrison and the constrictions that are available are often brittle. Nuts do not work very well by in large and only should really be brought in mirco sizes. Occasionally, offset mirco nuts are useful for the hardest routes. Pitons are still incredibly useful on this rock, especially on winter routes for the gunk filled cracks. A couple of large sized beaks should be a standard part of Morrison racks. On the harder routes, hand placed beaks may be all you get in some areas.

All in all, the rock is loose, the climbing is steep, and the stories are wild. Caution must be exercised on all routes.

Descriptions for the two most common approaches to the face can be found here: Mt. Morrison. 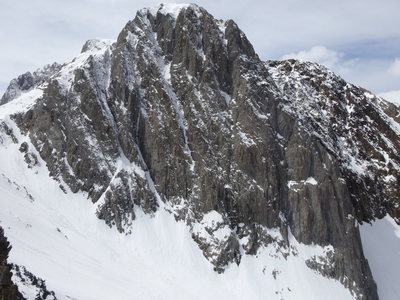 The north face of Mount Morrison in winter. 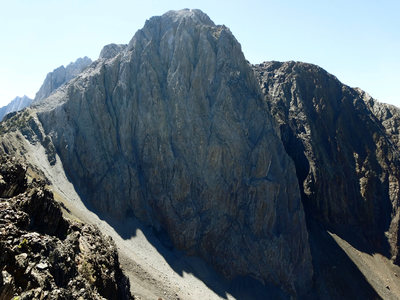 The north face of Mount Morrison. 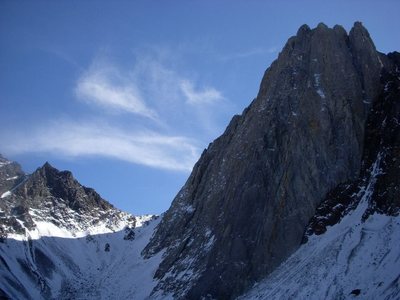 All Photos Within North Face