Routes in B. First, Second, and Third Triangles

This is the west-facing edge of the Third Triangle and the two below it. Together, they roughly form a single, long arete that you can see from the approach trail to the Lower Tiers (the upper pitch is the light-colored edge that sometimes catches the sun and stands out). The upper pitch is an easy, fun, airy 5.4 arete guarded by a large 5.8 overhang. The lower 1-2 pitches (5.4 at the most) are extremely dirty and lichenous and will likely rarely be done. Since the best approach to this route is to rap in, most people will opt to toprope the upper pitch only, but at least the lower pitches offer a chance to practice multi-pitch trad technique on easy terrain very close to home.

Rappel from the top anchor (bolts) in one long rap to a small tree low on the arete of the second triangle below (the Front Triangle). From there, rap another 65 or so feet to the rubble at the base of the lowest triangle.

The lower pitches are straightforward: stay on the low-angle arete, using abundant gear placements and giant holds. There is truly an epic amount of lichen down there - the rock is almost invisible under it sometimes - but at least the rock itself is generally not loose. Don't venture onto the west face - it will quickly become 3rd class but is also covered in rock debris. The lower pitches can be done as two separate pitches of 80-100 feet each or as one long lead. The climbing never exceeds 5.4 but has a few interesting spots, such as the short V-slots, one per pitch.

The overhang is protected with a bolt, which can be safely clipped from a solid stance below. The moves over the lip are fun and may involve a big pinch or a big flat hand slap.... Once on the arete above, protection is abundant. Stay as close to the arete edge as possible for maximum exposure and enjoyment, but the climbing here eases off to no more than 5.4. You get a fun position for the last few feet.

It would also be possible to bypass the overhang on the right side, but the rock is loose and protection is sparse until you are back on the arete itself (this would knock the pitch down to about 5.5 R). Besides, you'd be missing the most interesting part of the pitch....

It is on the arete at the right edge of the Third Triangle on the Upper Tier. The top anchors can be accessed from above by making a small exposed step around onto the ledge atop Joy of My World (you can clip the anchor before making the step around). One could also walk into the bottom of the third pitch by continuing on the 3rd class ramp to the far end of the Third Triangle. You can spot the single bolt on the overhang from the bottom of Joy of My World.

Gear to a #3 Camalot for the whole thing, or gear to a #2 Camalot for the upper pitch only. There is one bolt at the crux overhang - a locking biner may feel nice here, as it is your only pro above the anchor until you turn the overhang. 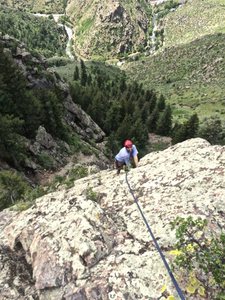 Jake on the upper pitch, after turning the over… 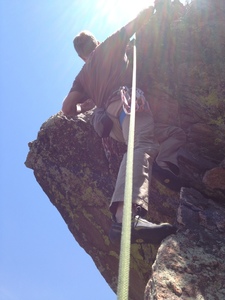 At the last pitch crux. 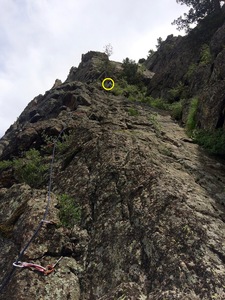 Jake Waples atop the first of the lower pitches… 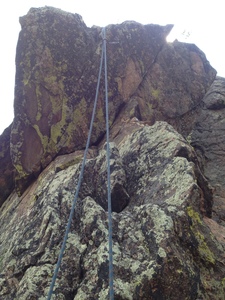 The last pitch and the bolt. 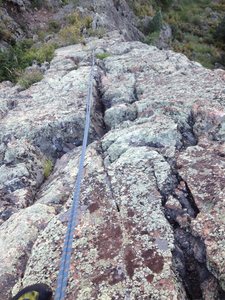 Looking down the second pitch at the easy part.