I Don't Wanna Wait in Vain

Routes in B. First, Second, and Third Triangles

Now you don't have to wait in vain for one of the other routes here to open up - you can play on this short warm up instead. Ascend the north face of the prominent block at the base of the First Triangle (i.e. the protruding section of rock between For Whom the Cap Fits and Three Little Bats).

There are several variations possible on this line, and the 5.8+ rating is only if the easiest is taken. To do this, face climb past the first three bolts, and then reach left to use the left edge of the face to move up under the final overhang. This overhang is most easily passed on its left side, but you do not need to move all the way onto the lichenous east face. Turning the overhang from the right side or head on is at least a number grade harder.

It is easy to toprope the variations once you have set the rope, and ascending the lower face directly up the middle from the third bolt to the overhang would also make things harder.

It is also possible to set a toprope by scrambling up to the top of the block on its east side (and scooting past a tiny tree out to the end of the little top area).

This is on the First Triangle, on the protruding block that separates For Whom the Cap Fits from Three Little Bats. The Upper Tier's access trail pretty much arrives right at the bottom of this one, or just to the right of it. 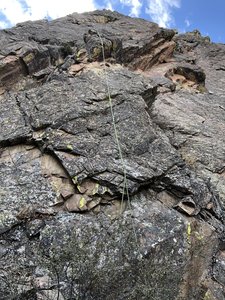 More About I Don't Wanna Wait in Vain