If you've ever complained that there's not enough good cracks in Southern Arizona, then you need to go climb this route RIGHT NOW. I'm going to go out on a limb and say that this is probably the best crack I've climbed in SoAZ. Unfortunately, there's high overhead: a long approach, plus either mediocre finishing pitches or a complex descent, but the second pitch alone is worth it and there's a number of other good pitches in the area. A good strategy might be to climb the first two pitches and then finish by climbing out on something else.

Pitch one begins with an awkward slot that leads to a cool fist crack, then a moderate hand crack, and finally a thin seam up a slab to a big ledge. A nice pitch in its own right.

Pitch two is the money: a beautiful splitter finger crack for 120 feet. The rock is superb, though slightly dirty due to neglect. After an old 2 bolt anchor, the crack begins to overhang slightly, and widens to rattly fingers! (There's an old fixed bong in this section that's extremely annoying as it doesn't seem reliable for pro, but takes up what is probably the only thing resembling a hand jam above the old anchor.)

There's a decent stance at the old anchor, and belaying here before the crux would also be a sensible option if you're at your limit on this pitch. The bolts are terrible, but good gear is available. I might try this next time.

Above pitch two we fixed a nut/sling anchor and rappelled off (with a 70, which just barely makes it to the ledge!), rather than do the last two pitches, which SQL II and Steiger describe as "rather boring." If you use this anchor, double check the back of the sling as the horn it's around is a bit sharp in places.

Edit: per the comments below, note that the bong and the old 2-bolt anchor have been removed, and there is now a fixed belay/rappel anchor at the top of pitch two which incorporates a new bolt.

After rapping to the ledge at the base of pitch two, either traverse off climber's right (south), or follow the ledge left and find a tree or other means of doing a short rap into the Aegir-Poseiden Gully.

Starts up and right from the lowest point of Poseiden. Look for a slot that narrows to a hand/fist crack. Another, thinner crack branches right below the slot and then curves back left into the main line--this appears to be an easier variation. You could also skip this pitch by traversing in on the ledge below pitch two from the right (south), but the first pitch is worth doing.

On pitch two, SQL II seems to suggest climbing a left-leaning corner rather than the splitter, but Steiger clarifies that this is a variation. At any rate, once you're there, the splitter is the obvious way to go.

double small cams to 0.75 camalot, singles above to #4 camalot(the 3 & 4 are only necessary for the beginning of P1, and there appears to be a thinner, though less aesthetic variant to the right). Save a 0.75 camalot for the crux on P2. 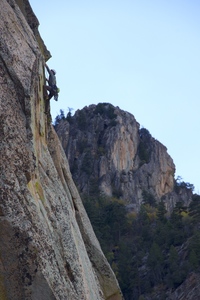 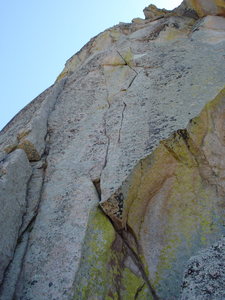 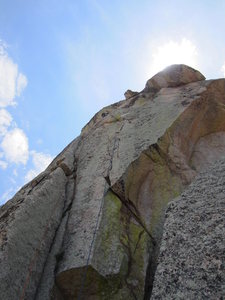 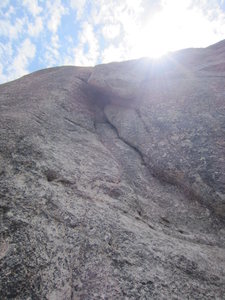 Pitch 1 as seen from base of route