Despite being a single pitch on Poseidon's massive North face, this slightly overhanging seam is described as “perhaps the finest twelve along the highway” in John Steiger’s guide. It was also featured in Climbing Magazine’s April 1987 issue, Hard Rock on the Lemmon. Where Brad Parsifal Smith writes:

"...starting the first moves, you feel like Dante trembling on the brink of the Inferno's Void - there is this unexplainable fear of something sucking away the sunshine at your back and a little voice in your ear hissing something about a great deal in exchange for a little soul..."

Brad Smith's writing is always great to read, but don't let artistry's hyperbole prevent you from getting on this. It's not as bad as that excerpt makes it sound, though you surely won't forget the experience.

Regain the main ledge and belay by small tree.

Start your adventure up a green lichen covered flake that leads to a dark stained, left leaning ramp. Follow the thin seam trending up & left. At an obvious point before the terrain steepens, “Something Unsaid” branches right through a series of under clings leaving the ramp.

Ignore any whispers of hesitation in the air beneath your feet, as you come up under the roof. Pull through with commitment, good footwork, & a little burl. Stay poised as the seam you’ve been following dies out for some final business. These moves are protected by an old pin placed by the first ascent party on rappel. (Edit: As of Oct. 2018 the pin has been replaced with a bolt.) A forgiving top out left to the ledge below Snow Arch’s upper pitches marks the end of this adventurous old school route. Guidebooks say most rap down from the bolts 15 feet to the left.

(Edit: The old bolted anchor has been upgraded from USE taper bolts, thanks Andy Bennett & ASCA)

**a 70m just reaches the gully boulders. Knot the ends of your rope.**

straight ahead when approaching around Aegir, can't miss it

Right of starts to Treebeard.

Doubles from micros to #1 Camalot, plenty of extendable slings.

Bring another #1 or #2 camalot as a directional for your follower before traversing to the bolted anchor.

A 70m just reaches the gully if you rap from ledge, knot the ends of your rope. 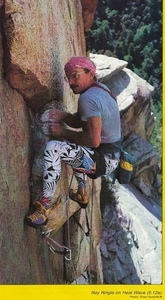 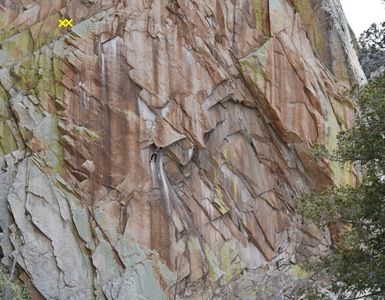 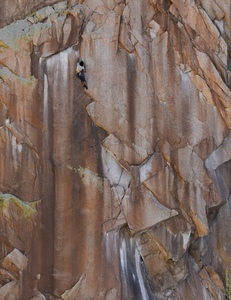 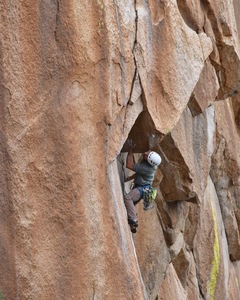 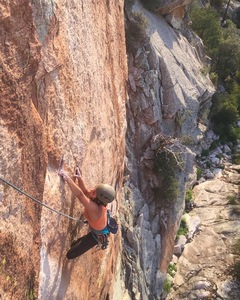 Eva Huie following as the route goes into the e… 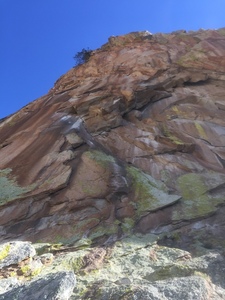 From the belay. Something Unsaid breaks right b…