Slightly right of the middle of the West Wall section of Casket is a large chimney looming over some dribbles (or a pillar in fat years). There are some big blocky roofs high and to the right.

This route has distinctly different characteristics depending on what condition it is in. Early season or in thin years you can climb from blob to blob clipping bolts as you go, to gain an airy dagger under the Bombay chimney. In fatter years you can protect it with ice screws and then bail off the anchor -or- continue up the overhanging and exposed (but reasonable at M5) upper chimney. Some years you get to do a little of both!

Early season or in thin years, there are 7 bolts protecting the bottom section up to the dagger (there is an anchor here on the left just above the ice at the base of the Bombay chimney). If you lead the whole thing to the top anchors (on the left as well), youll need a long runner (to clip the lower anchor) and 2 more QDs for the Chimney bolts (so thats 9 Quickdraws and a 24 Runner). If there is lots of ice on the bottom section the bolts will be covered so bring screws (stubbies for the first 30 feet), runners and a couple draws for the upper chimney section.

In fat ice years this has been led on screws for the ice and then shitty Cams and Specters in loose, muddy rock for the bombay chimney part on the top. With gear like that it was a serious proposition and all but those with oversized orbs would bail off V-threads at the top of the ice. With the bolts on the upper Bombay chimney, as well as on the lower section the route has become very popular and is one of the more safe but still "adventurous" moderate outings at Casket Quarry.

(Thanks to James Loveridge for supplying the above info) 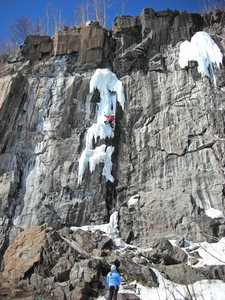 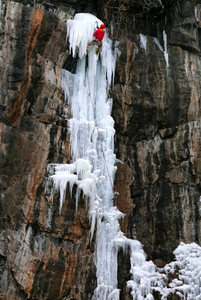 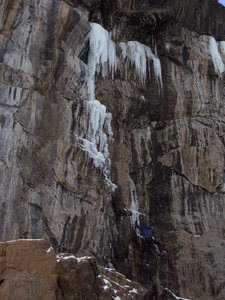 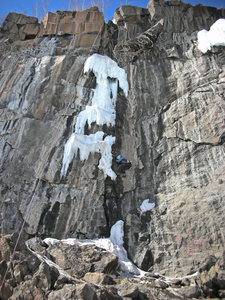 Kate Muehling hopping onto the ice on Chimney.… 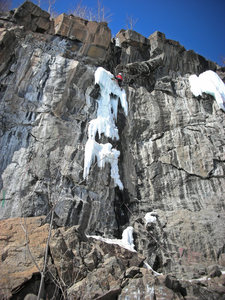 The Chimney. Higher up on the ice towards the r… 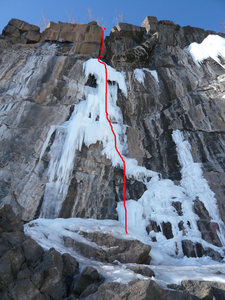 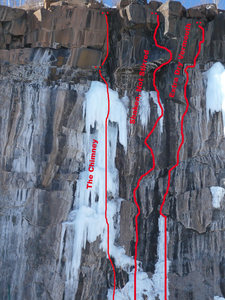 The Chimney - View from a little ways back (Feb…

More About I) The Chimney