This is the most prominent ice line at the West Wall section of Casket. The ice ends about 15 feet below a big ledge.

Some people refer to this as "Main Flow" or "Central Pillar" but it's been called Big Blue for 25 years or more so we'll stick with tradition... Although the ice doesn't reach the cliff-top (an unfortunate theme at the quarry for ice routes) this is a great climb with multiple variations!

There are 2 main ice variations: Right side is usually WI 4 'ish and the Left side is a little steeper, holey and more WI 5 'ish.

There are also 3 distinctly different mixed finishes and an early exiting right mixed variation called Turning to Stone which is described elsewhere. If you want to lead the ice but are not up for any of the mixed finishes, there are lower-off anchors at the top of the ice. Please note: The top of this climb can get a bit hollow and detached. Keep this in mind when clipping the anchors as they are kinda high and can be awkward to clip some years.

5-7 screws, the longer the better as it is often holey and hollow in places.

Anchors: There are 2 sets of anchors to TR from: One on the far left (hard to see from the ground) and one prominent set visible from the ground on the big block just Right of center.

The is also a set of lower-off anchors for leading the ice only. They are obviously visible just above the end of the ice (slightly Right of center).

The other visible anchor is just below the lip of the big ledge on the far right. This anchor is used for the rightmost mixed finish and- another mixed Variation called "Turning to Stone" (see elsewhere for the route description).

(Thanks to James Loveridge for supplying the above info) 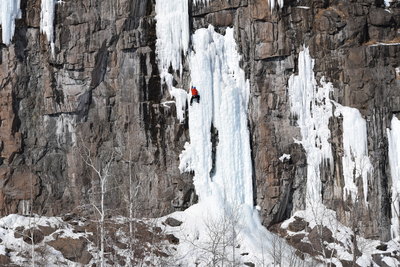 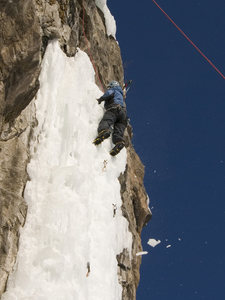 Kate Muehling finishing the left side of Big Bl… 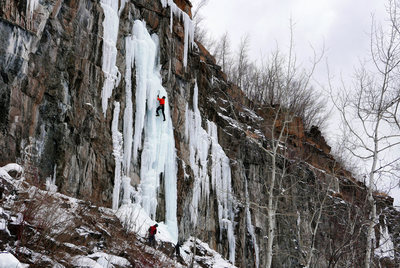 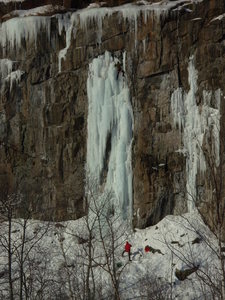 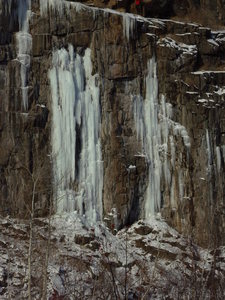 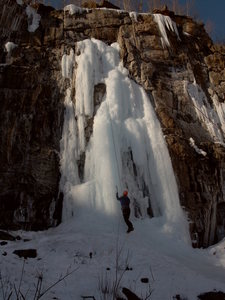 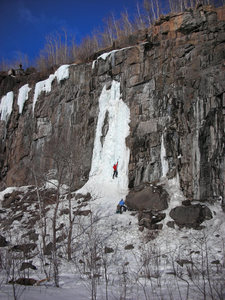 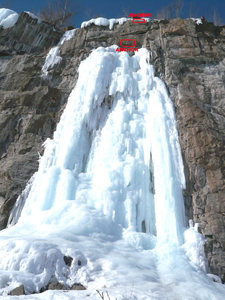