From the Lower Saddle, head southwest up and over to the base of the North Ridge:

1) The first major features you encounter are 2 large pinnacles. Traverse the first one, which is called Pinnochio Pinnacle, on its west side. Go on the east side of the second higher one, named Bonney's Pinnacle.

2) On the far side of Bonney's (south), you'll see a notch that's been formed by the erosion of a small dike. Climb up out of the notch, (easy) and head towards a ledge that leads around on the left side of the ridge. Traverse along on the ledge for approximately 50 feet until it ends, passing one smaller ledge that heads to the right, before heading to the right on another larger ledge for about 60 feet to a cave-like notch (room) in the ridge.

3) The easiest way out of the so-called room is to descend a few feet to some ledges below and to the east. Then traverse to the west (right) along these ledges into the gully, which you follow up and around the crest of the north ridge until you are near the left edge of the northwest gully.

4) Stay on the right side of the north ridge and in or near the northwest gully, following the path of least resistance up until you are in the Blake Dike. Turn left (east) and carefully ascend the crumbling slope of the Black Dike to the sharp notch at the top. In late 9/86, JHMG, Mark Whiton and I had to kick steps. A storm the night before laid down about 4 inches of snow and caused verglas to form on the upper 1000 feet of the Grand. Therefore, this climb became our objective. In the winter-like conditions, climbing out of the notch was the crux for us. Mark started high and led through a 5.8 move. Down a little and to the right you can climb out of the notch on 5.5 broken rock.

5) Above the notch, (a bolt and good horizontal crack provided belay). From there easy ledges and slabs go up and around to the east and to the north (true) summit. When Mark and I reached it, we were alone. The wind died and while huge flakes still floated down, the sun came out. Icefloe Lake below just sparkled. Then a party of four ascending the Southwest Couloir (3rd Class) soon joined us.

Most probably downclimb the Southwest Couloir. We traversed back north along the east side of the main summit block -- great view of the whole south side of the Grand -- where a gap allows you to head left (west) back over to the top of the black dike notch. We rapped from there into the dike notch and retraced the North Ridge route back to the Lower Saddle.

A few nuts and a couple of tricams. Mark used a #7 Hex to protect 5.8 crux move. The same Hex came in handy for me at the bottom of the dike while Mark descended it. I'm not sure it would've held if he had slipped on the snow covered diabase rocks of the dike on his way down, but it's all I had. 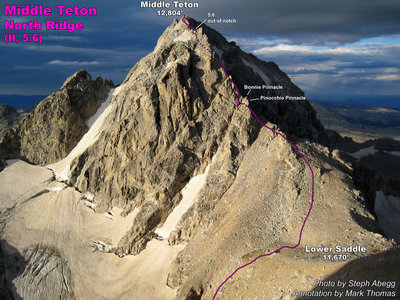 Middle Teton from base of Lower Exum Ridge (pho… 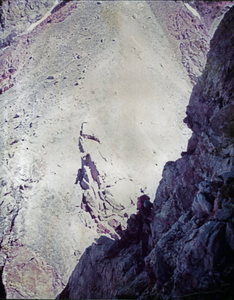 Wendy Weiss on the North Ridge of Middle Teton.… 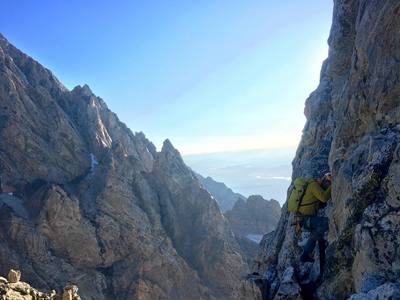 Darin descending to the lower ledges below the… 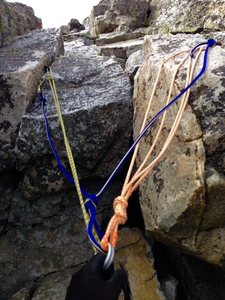 The rap anchor right above the 5th class climb… 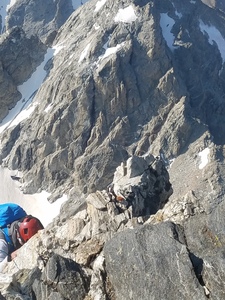 Looking at the middle teton from the top.of the… 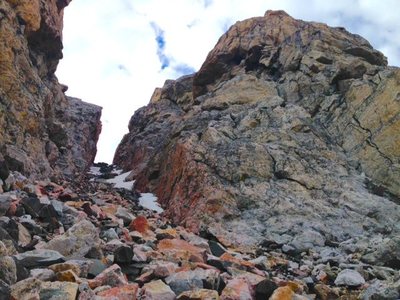 Looking up the "Black Dike" notch that you clim… 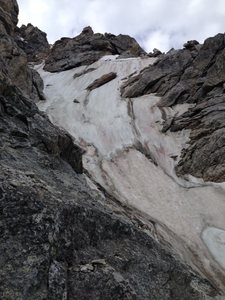 A look at the Northwest Ice Couloir gully. Clim… 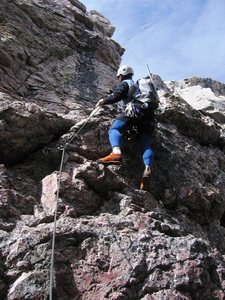 Matt stylin' the last difficulties on the North… 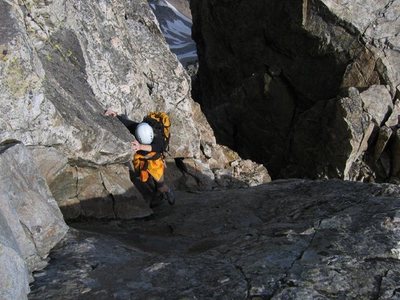 P girl 3rd classing the lower part of the route… 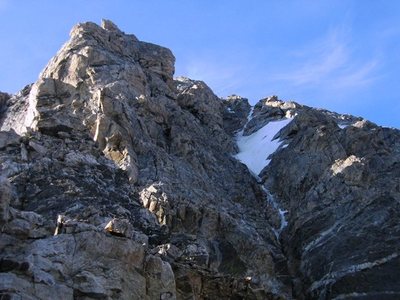 North Ridge of the Middle Teton with "Harry's H… 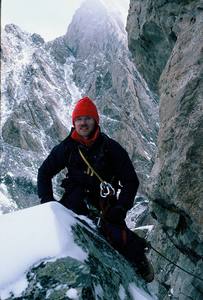 Just above the notch at the top of the Black Di… 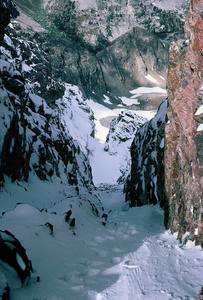 Looking down the Black Dike on North Ridge route