On the upper right side of the formation is a overhanging finger crack to a ledge 3/4 up the formation. Note that there is an unfinished two bolt line to the left which is indicated as this route in the '92 Vogel guide.

Jam up to a ledge below a short left facing corner. There seems to be two possibilities to start, the left of which is the most straightforward. From the top of the corner jam left on the imposing finger crack. Past the crux the finger crack eases into more of a layback. The overhanging nature of the route makes it unforgiving of mistakes or a willingness to try and overprotect.

The descent is via a scrappy chimney up and then around the back of the formation.

1 #2 Camalot or similar, plus a good selection of small cams red Alien and smaller, hand sized for the anchor.

A letter from the first ascent party

"Limp Wristed Faggot" was the provisional name given to this route when it was first ascended, in 1984.

"Thin Line" was the name ascribed to the route when it was first published in the 1986 Joshua Tree Rockclimbing Guide, by Randy Vogel. It stayed that way for 20 years. I will deem this the primary name.

The provisional name, LWF, resurfaced on Mountain Project without my knowledge, in 2006. So the route lived with that name for 10 years, and it was predicated upon some historical basis. It also became revived in the guidebooks, something I became aware of only very recently.

There has been much controversy here on Mountain Project over the name LWF, to include on one hand, concerns of bigotry, accompanied by the call from some readers that the name be changed. This has been met and resisted vociferously by other readers due to concerns over censorship.

For this reason, (and because either name appears in different editions of the guidebook) it is my wish that both names be retained, with the primary name leading. Respectful of both sides of the controversy over the name, I suggest this route be published on Mountain Project as: "Thin Line a.k.a. Limp Wristed Faggot". I recommend not using any phrases such as "the route formally known as", because this will not be respectful of those who have concerns over censorship.

For those readers who wish to appreciate how such a route name originated, I have provided the narrative below.

I am the Limp Wristed Faggot. The chosen name was an expression of self-deprecation. Granted, that's not very enlightened, as it is essentially still homophobic in its derivation. Teenage boys in the 70s routinely bantered this way. We were all homophobes, even if we didn't actually judge homosexuals themselves. At age 23, when I did the route, I was just beginning to come out of this. It's just how we talked and acted. We were silly, ridiculous, and yes, often hurtful. Counterculture angst and all of that fun stuff.

In spring of 1984, the time of the FA, I was coming off of a frostbite injury to my fingers and it was a route I thought I should have been able to flash, on-sight. I couldn't, I wound up top roping it. I was very angry that I had let myself get injured so fundamentally as a climber and so early in life, pursuing what was to be, and would become, my life's work. Corny, but true.

I completed the original top rope of LWF with Michael Paul. He said, "Whoa, Limp Wristed Faggot ... That's an edgy route name. There's a double entendre to it though, Roy. The Brits call cigarettes fags. You were so pumped (limp wristed) you couldn't even hold a cigarette (faggot)." In fact, it was the weight of a joint which bent my wrist back, not a cigarette. I know children might be reading this, sorry about that.

So Mike Paul liked the name, because he knew those individuals prone to making hasty judgments might jump to conclusions about some homophobic derivation, (which it was initially), but that if they were a bit more worldly, they might understand the connection to British cigarette slang. To Mike, the name was a trap for presumptuous types. We were all about being well-traveled, so that was his approach to it.

Did I really think that would hold water? No.

Mike Lechlinski actually got the first lead. He didn't care about the route name and didn't think it should be reconsidered. You would have been appalled to listen to the gnarly tone and tenor of our average chiding with one another BITD. Seriously, we were total brats. Irreverence was part of what we were all about. There was no Internet. Climbing was nothing like it is now. It was not even close to becoming mainstream. Yes, context is everything.

In fact, and here's the good part, Randy Vogel, at the time of the FA, 1984, told me he thought I would regret the name LWF. He actually changed the name to Thin Line. Thin Line! How boring, we all thought. I figured Vogel was probably doing me a favor so I just let Thin Line stand. It wasn't until very recently that Randy told me he regretted censoring me, and that he had restored the route name to its original state.

Not long after I named that route, a young woman whom I respected very much, said to me "You should be careful how you talk about homosexuals, Roy. You never know who might be one." Being that I actually never had any problem with homosexuality, and that I strive to be sincere in all my dealings with people, I really got what she was saying, and I grew up.

Initially, a route name is nothing more than a bauble you roll around in your palm for consideration. It's not even the climb. It's a cultural artifact. Where that name selection eventually settles can be something almost completely arbitrary.

I'm not big into route ownership. Once I top out on a trad route FA, I'm done with it. By comparison, I find the top-down FA experience equal to that of high school auto shop, so not bad, but I have no great emotional connection to such an experience.

A route begins and ends in the public trust. If those who become the custodians of this public trust choose to alter my route names, add or remove bolts to the rock, I say this is their prerogative. But they do so at the risk of fragmenting their own lineage.

Click here for a lengthy and colorful discussion on the topic of the former name. 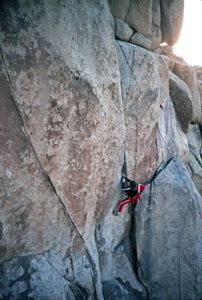 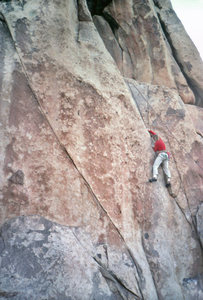 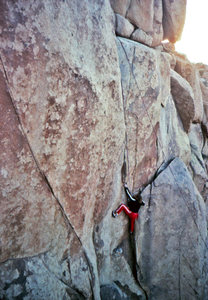 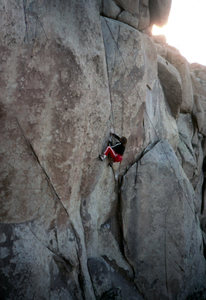