Lots of interesting climbing, but
this sector is still Under Development. Most critical is that it needs at least one more round of work to remove loose + breakable rock, getting serious with crowbar and hammer. For now only parties experienced and prepared to take care of themselve with loose rock and making their own anchors should try climbing here.

Lower Left side is a sideways-slanting slab. Lower Right side is a slightly overhanging wall.
Faces WSW. Upper central fins and right are roughly vertical with some less-than or more-than vertical features.

Top-Roping: The obvious way to set up top anchors for the Left Slab part is to lead the route Near Left Gully.

For the Central Fins area, the obvious way to set up top anchors is to Lead one of the bolted routes in CF or Upper Right UR. Another possibility might be to do try a Trad lead of the route Left Tower + Groove.
. . . Least difficult climbing moves would be to do a Trad lead of the the route Hand Traverse . . . then continue up and right on the route "Connect Top Central Fins" -- but that is loose and dirty with rope drag, and exposes the followers to side-swing injury if fall on the final traverse section -- and the loose rock + gravel endangers other parties.

A way to get access to set up top-rope anchor above the lower right side of this sector is by first hiking/scrambling up steep Right toward sector 9 Chouinard. But before reaching it, scramble up Left a little ways, then traverse Left across upper part of South-facing wall (4th class exposed), then continue traversing north (3rd class) above top of sector 8 Dostie lower wall.

Descent: Several rappel anchors high (though below top) in the Central Fins and Upper Right parts -- but bring some cord to connect between the two bolts, and perhaps your own ring or quick-link in case something is damaged or inadequate.
. . . To get down from the top of Central Fins + Upper Right, can traverse horizontal right (south) to sector Chouinard to find rappel station on gentle platform at top of the Big Dihedrea.

Name: Craig Dostie has been a key builder of enthusiasm for backcountry skiing in the SIerra -- and central information source for equipment and techniques and locations and community for all USA backcountry skiing, especially through Couloir magazine (now merged with Backcountry magazine). Later launched the EarnYourTurns website.
Grew up around Moorpark by Los Angeles. Started skiing backcountry in the San Gabriel and San Bernardino mountains because could not afford lift tickets. The Alpine Ski Touring Committee of the Sierra Club needed a newsletter, so he started "Le Chronicle du Couloir". Then saw that the need was larger than California, so launched the first nationwide magazine for the growing movement of backcountry skiing (and broadened the vision to snowboarding) - [ see story ] -

. . (previous name "Cosmiques" was for the high mountain refuge / hut / hotel (after a station for research on cosmic rays) near the top station of the mechanical lift which quickly brings climbers up from the valley floor.

warning: The rock in this sector has not been climbed much yet, and much of the rock is still breakable and loose -- so the belayer and other people should stand far away from underneath the climber.

Follow the instructions on the Rush area description page to reach sector 7 Hill. Then turn Right and hike up a steep slope 80-100 feet on dirt + grass + sagebrush + rocks to reach this sector. (10-20 minutes)

Another way to reach this sector: From the East end of the log bridge, at first go NE 15-20 feet, then walk E about 65 feet through forest, then up a short steep embankment trending right up to flat. (Note carefully the appearance of the trees and other features here, so you can find it again on return).
Next hike uphill ENE about 500 feet, at first through sagebrush, then scrambling on boulders, then a steeper slope on dirt + grass + rocks to reach sector 8 Dostie.
. . Total hiking +200 vertical feet over 0.19 mile distance. Typical range of times 9-18 minutes.

If already at sector 9 Chouinard, hike N down a steep slope about 100 feet on dirt + grass + sagebrush + rocks to reach this sector.

Mountain Project's determination of the classic, most popular, highest rated climbing routes in this area.
More Classic Climbs in 8-Dostie » 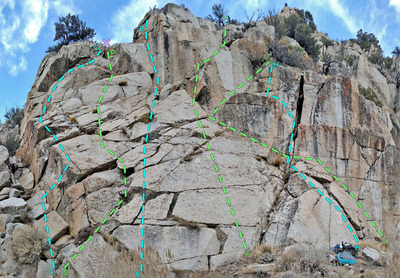 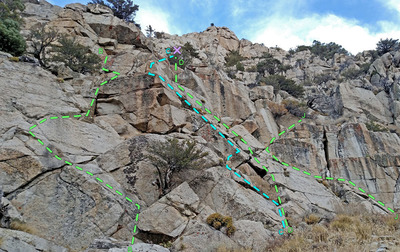 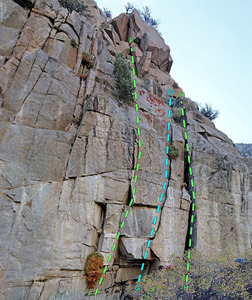 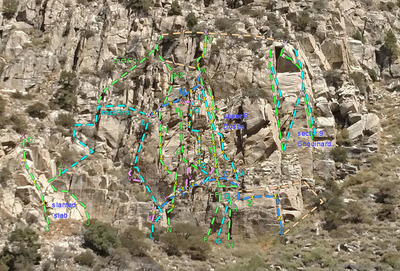 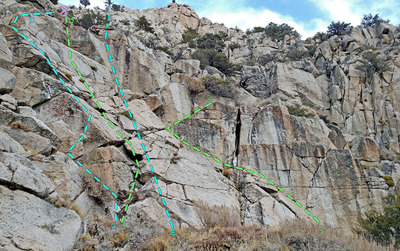 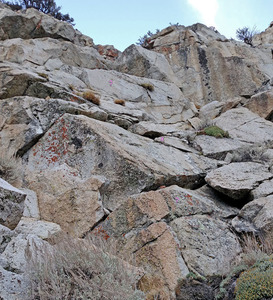 All Photos Within 8-Dostie