This beautiful dome-like slab has a wealth of history and a host of classic slab climbs, with rewarding views looking up and down the Kern River. Kern Slab received its initial first ascents starting in the early 70's, with ascents of The Lieback and Claustrophobia Crack (originally rated 5.5). This was during an age when old hexes and homemade manufactured thread nuts were used. Many of the bolted slab climbs didn't come until much later. Of those most notable, especially for their bold and somewhat runout nature, Cornflakes (5.9R/X) and Branscum-Martin Route(5.9R) stood as testiments of daring skill and ability. However, several modern bolted slab climbs have appeared in recent years, which have proved to be engaging, thoughtful and challenging yet a bit less runout. The Beer Wall (left lower side of the slab) was recently developed in the last few years by locals Marco Kreb, Matt Chambers, Dave Daly, and legendary Herb Laeger, who has completed hundreds of FA's since the 70's throughout the southern Sierra and beyond. Most of the routes on the Beer Wall range from 5.7 to 5.9, with one or two dipping into 5.10. Highlighted routes worth checking out: Hop Matter (5.7+), Lagers With Laeger (5.8), Fine Line (.10a) and Friction Brewing (5.10c/d)

Overall, most of the routes at Kern Slab are moderate in nature and equipped with 2-bolt ring/chained anchors to rap from. In regards to multi-pitch routes, always carry 2 ropes. Some of the older routes were done with (2) 50 meter ropes. You'll discover that using a single 70 meter rope to rap with won't quite make it to the next set of anchors. If you decide to top rope, please minmize the use of threading ropes through the chains or rings and use an equalized anchor system. This cuts down on the wear and tear of the rings/chains.

The best time of year to climb at Kern Slab is from late fall to late spring. If you're going to climb during the summer months, best times would be 7AM to 10AM, before the sun crests over Powers Ridge. Also, be aware that this is also rattlesnake country. Keep a good eye out near the base of the rock for them, especially in the early to late spring. Lastly, please be mindful by packing out what you packed in. Lots of good folks have worked hard to keep this area clean to demostrate that climbers are responsible users of such wonderful natural resources.

Drive approximately 4.7 miles north, after passing the Kern River Brewing Company (on the left side of the road) while passing through the town of Kernville on Sierra Way. During the last 1/2 mile, you'll see the dome-like slab on the upper right. Upon arrival, there is a fairly large pullout on the right hand side that can accommodate up to 8 cars. The trailhead starts at the back left side of the pullout and winds up somewhat steeply. At the top of the trail, one can either go left, which ends up over at the Beer Wall section. Or go up and right to locate such classics as Chouinard Special (5.8), The Lieback (5.8), Claustrophobia Crack (5.7), and Dirty Dishes (5.7). 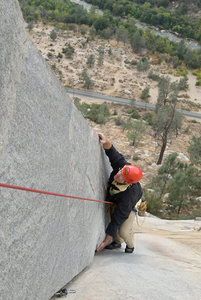 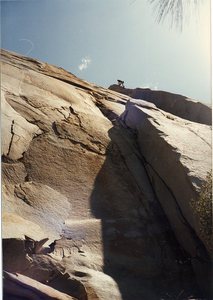 Me high up on the Kernville Slabs 80's 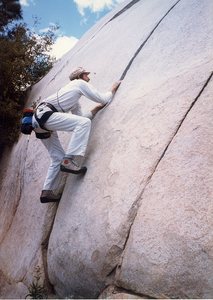 Me at the base of the Kernville Slabs in the 80… 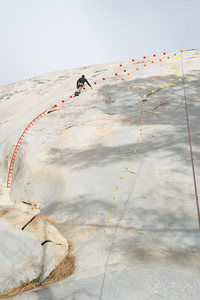 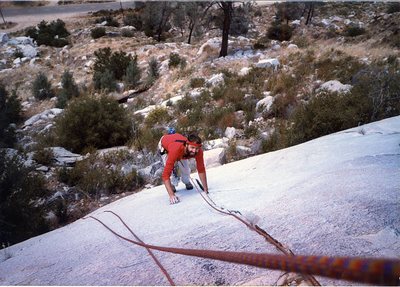 My brother Doug Odenthal at the Kernville slabs… 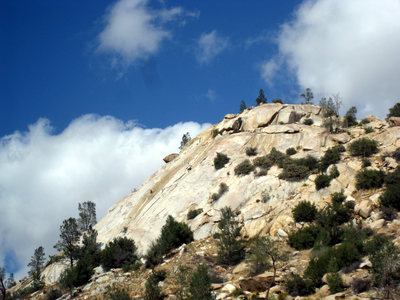 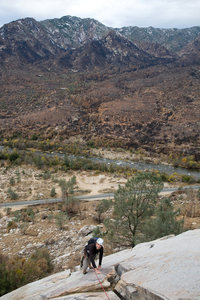 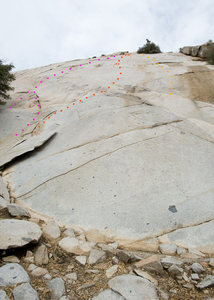 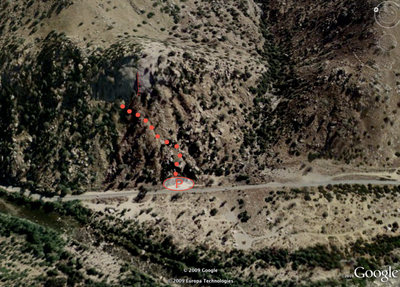 Aerial view of the parking and approach trail f…

All Photos Within Kernville Rock (a.k.a. Kern Slabs)