There are now five climbing walls to pick from in relative proximity to this access to the Rio Grande. Lumped together as being by the boat put-in for the Taos Box, the oldest and most easily approached is John's Wall. Right off the road on the Hondo Creek. Above this roadside crag follow a climber's trail up to The New New Buffalo. Back up Hondo Creek on the same north rim, the Solar Asylum has the stiffest overhanging sport routes. One of the best single track rides in the Taos (Horsetheif trail) goes right by the top of this crag (see directions for alternate approach to top of crag). Just upstream from the John Dunn Bridge on the east side of the Rio Grande, the River Wall has steep sport routes on the wall directly across from the Taos Box Put-in. If you cross the John Dunn Bridge and park at the put-in you can access the Old Stagecoach Road and some moderate sport mixed with easy, short trad. These are the easiest toprope choices.

Continue on the main road to the west to Miner's Crag, and a host of sport and trad routes on a wild landscape.

The BLM just installed two new long-drops to accommodate your post-caffeinated gastro-colic reflex. Please use these john's at John's.

This area represents the only drivable access to a Rio Grande River-level crossing for miles and has been a historic western access trail for Taos and it's natives for centuries. From stagecoaches headed to Flagstaff or old John Dunn's Model T Ford bouncing out to meet the Chile Line at Tres Piedras, this is the way you went on wheels until the Gorge Bridge was completed in 1968. The Pueblo Indians and others also left their mark as is evidenced by petroglyphs lining the Hondo creek and the Rio Grande. Further downstream is the the old Manby Hotsprings stage road, bridge and ferry crossing. Manby lost his head over his land grabbing deals and lost the bridge in a flood.
The famed New Buffalo Commune was just up Hondo Canyon, "Easy Rider" was inspired by this and the likes of the Hog Farm Commune, Ram Dass, Ken Kesey, and others who explored the counter-culture in the 60's.

From Taos, go north on highway 522 to Arroyo Hondo about 10 miles. Turn left at Arroyo Hondo. Follow dirt road about 2 miles, bearing right at fork. Almost down at the Rio Grande River, a small basalt roadside wall appears on right just after bridge over the Rio Hondo. There are about 20 routes. There are hot springs about 1/4 mile downstream on the western bank of the Rio Grande. To enjoy the Black Rock Spring, turn Left after the bridge and drive up this road to park at the first turn. Follow a faint trail downstream. The Manby Springs were in "Easy Rider" but are a bit harder to get to. Bring a trashbag and do your part to keep it clean, favor. 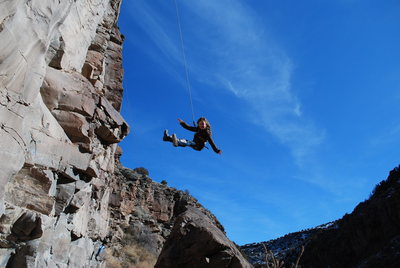 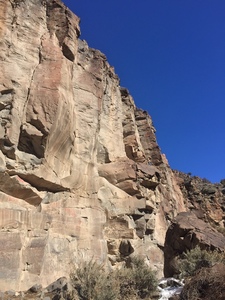 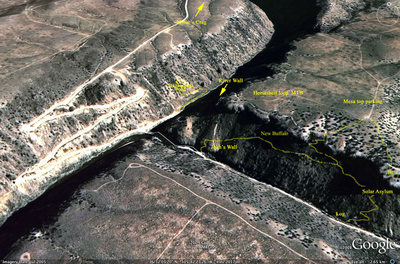