Climbing is prohibited from January 1 until two weeks after young have fledged, usually July 1st.

Seasonal restrictions are applied to specific areas on the Umpqua National Forest for natural resource protection, including wildlife protection. These restrictions are utilized to protect certain wildlife species during their breeding cycle. Some species are very susceptible to human disturbance, and even minimal contact or entry into areas utilized for breeding can negatively impact their reproductive effort. For this reason, a seasonal restriction is applied and access into the area is prohibited. The seasonal restriction applied to an area may be lifted if the results of monitoring indicate that keeping the restriction in place is no longer necessary. Rock climbing is one of many activities with the potential to affect local natural resources.

Approach from either the Dry Waterfall (5.8) or scramble downhill from the Lookout toilet, with an exposed Class IV scramble to the base of the South Face and bolted line on Wizzard's Tower. Wizards Tower is a moderate 150' (5.7) with consistent climbing at the grade, as the route winds over the bulges on the Southeast face. With a mix of jugs and slab, the exposure increases exponentially during the route all the way to the summit. Bolts are placed when climbing is consistent, but expect runouts on easier terrain. Alpine draws can be nice to reduce rope drag.

Descent- Rappel about 30' off the East face (backside) of the tower, aiming for the large fir tree below. From here, you can hike uphill towards the backside of the rock, where a small ledge feeds into the hillside. The trail to the fire lookout is easily accessible from this point, and is located in the trees as you continue to traverse across the back of the formation. Refer to pg 46 Topo in 2007 W. OR volume 2 - Umpqua climbing guide.

Use the climber access trail to traverse to the base of the main rock feature. A gully feeds a (hopefully) dry waterfall streak, which is where the climb starts (this is also known as the waterfall route).

Bolts, PG - leads and exposure may not be suitable for someone transitioning from gym to outdoor climbing at the same rating. 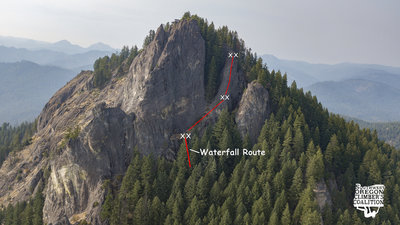 Topo of Wizards Tower in relation to the rest o… 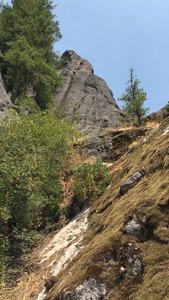 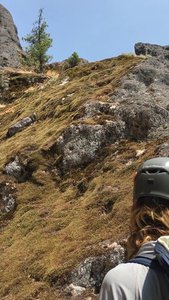 Pitch 2, option 1: march through the moss