Routes in The Monkey Skull

On Nov. 2, Manny Rangel and I were looking for sun to please his Arizona sensibilities. This would be his first time in the SSV, so I suggested the most popular rock there. By the time we could hike up to Monkey Skull, the right side would be in the sun. No one else was around.

Each of us has enjoyed many decades of exploring unpublished terrain. At least 50 feet to the right of Fever Dance, past a jumble of unappealing blocks and behind a tree, we found a short, left-leaning, unpublished hand crack that leads to the right end of an unpublished overhang that caps a short right-facing, unpublished dihedral. My 5.6 lead continued upward, weaving around blocks and reaching a big ledge at about 60-70 feet.

Behind a flat boulder, a clean-cut, 90-degree unpublished dihedral is capped at 15 feet by a horizontal ceiling. Manny led this, finding a horizontal squeeze chimney that was hard to enter and exit (crux, 5.9). He threw up his right foot to enter the slot; I threw up my left, then inched outward until my head, then shoulders, then torso was protruding. Just as I was about to fall out, head-first, I twisted enough to reach a finger lock. Easy climbing continued up to the big ledge/slope that could be descended to the right, to return to the ground. I wish that I had brought my smartphone, so that I could take pics.

It is at least 50 feet to the right of the start of Fever Dance. 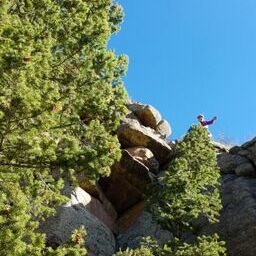 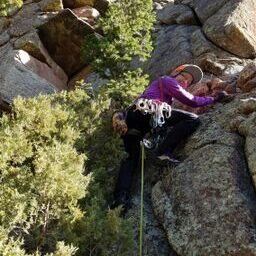 GB starting up P1 of Looking for Trouble, Nov.…

More About Looking for Trouble