Devil's Kitchen Headwall is the big rock wall stretching from Pearly Gates (top of Hogsback) east toward Steel Cliffs. Left variation, as I'm calling it here, is the long couloir that splits the middle of the headwall. The route is distinguishable by the fact that it runs the full height of the headwall, unlike the routes to the right (east).

Climb the snow/debris ramp at the bottom of the headwall to the mouth of the couloir, and proceed up steep snow to the first step. If it's not completely iced-over, this will be the crux of the route. If you don't see good ice above this first step, don't climb the route- it's not 'in.' Trust me... you don't want to climb when it's not 'in!'

The rest of the route is obvious from there- two more ice steps will challenge you as you work your way up the couloir. When you get to the rime funnel at the top, you can choose to exit to the left, or continue up to the Eastern Ridge for a stronger, more aesthetic finish.

If you choose to exit the headwall to the left (green line on the cover pic), cross over a short ridge above the third step to the left, and head straight up between the rock features above you. This will put you on the shoulder between the headwall and Pearly Gates, which leads directly to the summit ridge. Keep going up till there's no more up.

If you choose to continue up and to the right toward the Eastern Ridge (blue line on cover pic), you'll likely be rewarded with a bit more ice, and an exciting traverse around the gendarme at the top of the headwall. Pop up onto the right to the right of the gendarme, traverse over over the east face toward the saddle above you, and move up to the summit ridge. Continue up till there's no more up. Use care traversing around the gendarme- if the sun is up and shining, the snow will be sun-affected, and can be very loose and unstable.

The route seems to come into best condition in late winter/early spring. Climbing in thin conditions can be very sketchy, and short ice screws and thin, shitty pins will probably be your only protection. Later in the season, when the ice is fat and there's consolidated snow above the steps, medium screws and pickets, quantities depending on your desire for 10-20' steps. 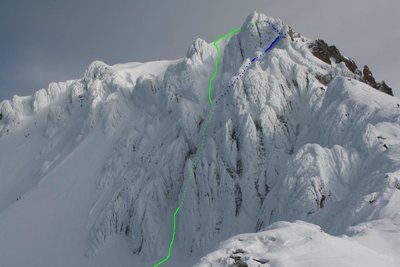 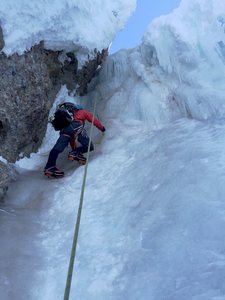 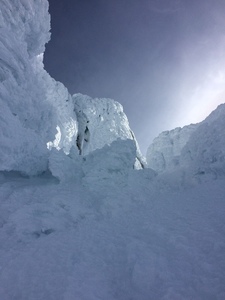 Looking up after the second ice step. Only one… 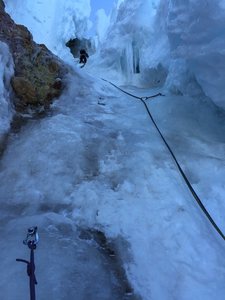 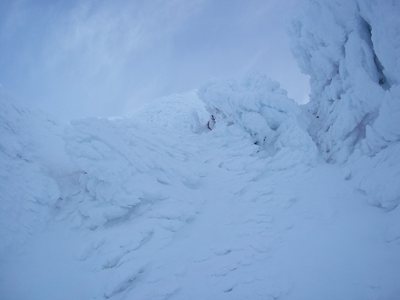 Top of the couloir - Go left over a small ridge… 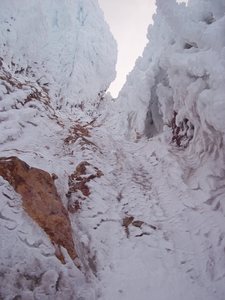 Middle of the route 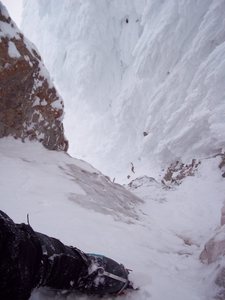 Looking back down the first step