A classic route on the Northwest side of Mount Rainier. The route itself ascends more of what I would describe as a terraced buttress and ledges than an actual ridge, regardless, Ptarmigan Ridge offers fantastic position and interesting and often varied climbing. Consider the enjoyable approach to a scenic highcamp that you often have all to yourself and it makes Ptarmigan a worthwhile objective for any experienced and fit climber. The route consists of snow climbing(40-55 degrees) and often several sections of mixed rock/snow/ice. The route is steeper and more sustained than its classic neighbor Liberty Ridge and requires almost 1000 feet greater elevation gain on summit day due to a start at 9,800ft on Mowich Glacier versus Liberty Ridge's 10,700ft start from Thumb Rock.

From 10K highcamp downclimb loose rock or steep snow a few hundred feet onto the Mowich Glacier. Crossing the Bergschrund is typically accomplished by finding a bridge just left of a rock outcropping about center of the face but an end-run may be necessary if the schrund cannot be passed in this area. You can easily view the condition of the shcrund from highcamp on the ridge. Once above the schrund climb 40-45 degree snow for about 1000ft until just below large rock cliffs where you make a traverse left into an hourglass shaped snow face below the large rock buttress that splits the upper route. Climb 45-55 degree snow to base of rock buttress at 11,500ft. There are two possible variations to the route that ascend from this point at the base of the buttress.

(1) The original (1935) ascent traverses left onto exposed snow slopes then contours around and up onto Liberty Cap and climbs between the rock buttress on right and the icefall on left(45-55 degrees, often icy) it then ascends towards summit as described below.

(2) The other variation (first climbed in 1934 during an attempt by G. and W. Bauer) traverses right and up from the base of the rock buttress. Depending on conditions this section may be good styrofoam snow or verglassed rock or water ice or a combination of all. After several hundred feet of climbing through a minor rock rib, you'll move out onto the very left margin of the Mowich Face around 11,800 ft. Continue a rising traverse to the second rock gully encountered. One or two pins may be present in this short vertical rock step. Easier scrambling above this leads to the Liberty Cap Glacier.

From the lower Liberty Cap Glacier, follow easy snow to Liberty Cap where one must descend a few hundred feet then climb back up several hundred feet to reach the 14,410ft summit of Columbia Crest. Recommend descent via Emmons Glacier route.

Once on route few bivy sites exist until you exit the rock gully onto the lower Liberty Cap Glacier. There are excellent bivy sites higher near Liberty Cap and Columbia Crest.

The route starts at the left edge of Mowich Glacier just below the 10,200ft high point on lower Ptarmigan Ridge. There are a few approach options. If you plan to ascend the route and carry over and descend Emmons(recommended) then either a car drop at White River is necessary for a start from Mowich Lake, or one can approach from White River and eliminate the need for a car drop. The road to Mowich Lake is often closed as late as early July and the route is often in great shape by May. If the road is closed at the gate and one must walk the extra miles up the road before beginning this approach it may be just as easy to do White River approach and avoid the car drop.

For Mowich Lake approach follow the trail approximately 3 miles to Spray Park and ascend the lower slopes of Ptarmigan Ridge until it narrows above Observation Rock and continue until suitable bivy sites are located. Many bivy sites exist along the ridge but it is advisable to make camp as high as possible to get a quick start onto the lower slopes and to help facilitate scoping out the short descent onto the glacier and the condition of the schrund.

For the White River approach follow the Glacier Basin Trail approx 4 miles to St Elmo Pass(7,400ft). Once at the pass drop down a couple hundred feet onto the Winthrop Glacier and holding as much elevation as possible traversing west towards Curtis Ridge and continue west crossing the Carbon Glacier. Once across the Carbon climb moderate snow slopes aiming for the ridge just below the 10,200ft high point. Excellent bivy sites here.

The route is conditions dependent and can change dramatically from early season ascents to later in season. It is possible to encounter the route as almost entirely a snow climb with one short fixed pin protected rock section where only 3-4 pickets would be necessary for protection or there could be substantial climbing on verglassed rock and/or water ice in which case protection may include ice screws, a pin rack and/or light rock rack. 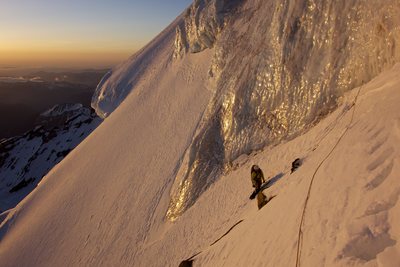 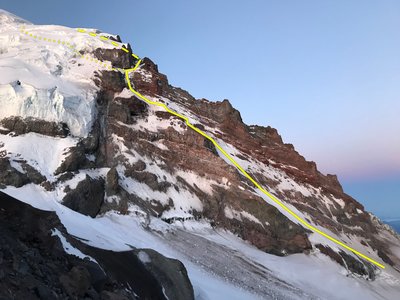 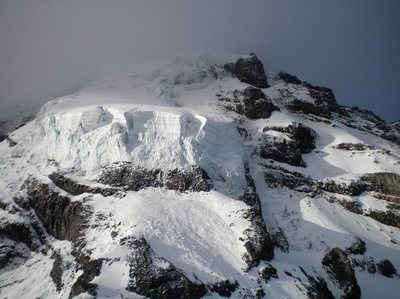 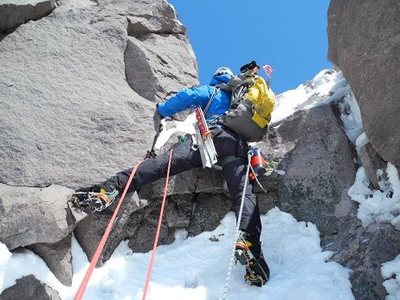 The rock step. My heart was pounding! 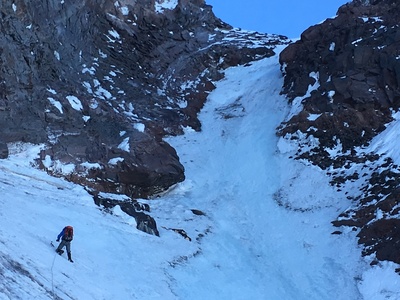 This pitch of blue ice was the best of the rout… 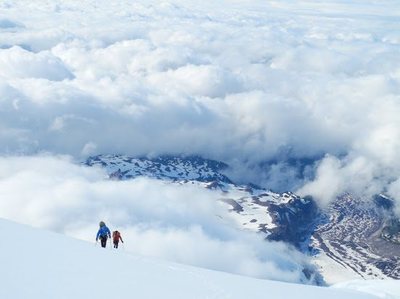 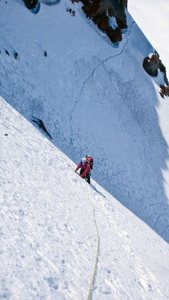 Scott Sampietro traversing into the slopes of t… 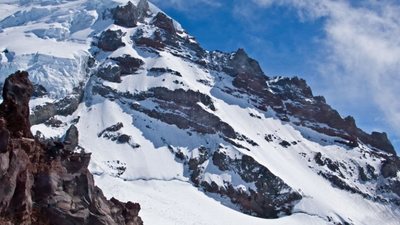 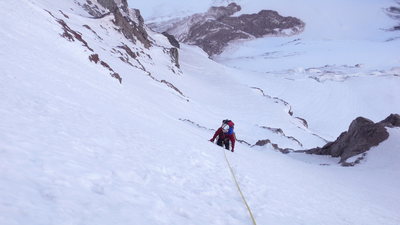 Scott Sampietro at about 10,500ft on Ptarmigan… 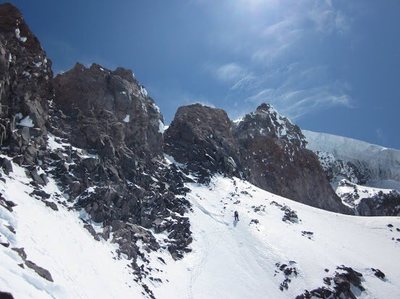 Climbing towards the exit gully(just left of ce… 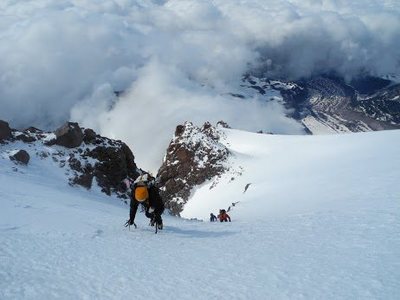 Just above the technical section of the route w… 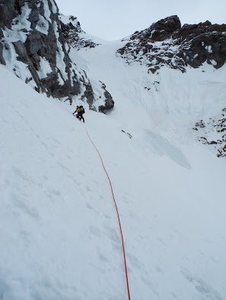 First pitches to the right of the rock buttress.