This is a powerful, endurance route, with some pretty hard moves. With the exception of a knee bar near the beginning of the route, there are no rests to speak of. The technical crux is near the bottom (this has gotten harder since part of a rail broke a few years back); though just linking all the moves together to the final jug is the real test.

This route is on less than stellar rock and has been falling apart since before Scott even red-pointed it. Glue has been used to reinforce several holds (e.g.: the large flakes on the upper section) and the key right-hand hold on the technical crux broke off (while still a project) and was re-glued on by Scott (I believe).

If the idea of using reinforced or re-glued holds is repugnent to you (it is now illegal in the Park, but was legal at the time this route was done), just do not do this route. Do not get high and mighty and harm this climb; it has seen at least a hundred ascents and is a well settled classic.

Edited by Adam Stackhouse, with the narrative provided to me by Scott Cosgrove 8/6/2013

"Back in 1991, I stumbled onto the Turtle Rock corridor repeating my friends climb Satanic Mechanic and couldn't believe my eyes. Visions of sport route heaven and massive lines everywhere. The most obvious was Desert Shield. But just some bouldering at the base proved that the rock was far from solid, and I embarked on a cleaning mission that would last for four days.

Finally, the bolts were in place, the flake and loose rock climbable, and after a few days work I was ready to send. But as fate would have it, I got the flu and Jim Karn, the best American sport climber was passing through town. I knew Jim would hike the thing on accident if he saw it and I would be robbed of my first ascent. To my girlfriend's horror, I went to the bathroom threw up and then we drove to the Park and send my project first go. Threw up at the base and had her drive me home.

The route became the flavor of the month and we all enjoyed having a new line of hard climbing so close to camp. It was and still is one of the most pumping climbs, as no one move is much harder than the next but it never gets easy. I named the climb after the first Gulf War, just because I like the name and it looks like a Shield."

Seven bolts (1/2" SS) to sport anchors. Bring draws. It is possible to use a rope to then reach the anchors from the top. 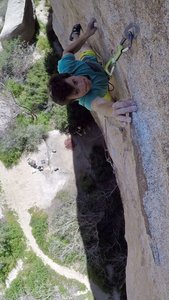 Reaching big for the jug. This move felt super… 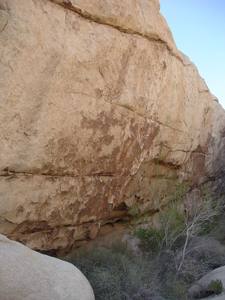 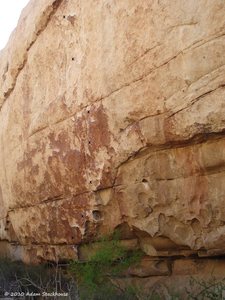 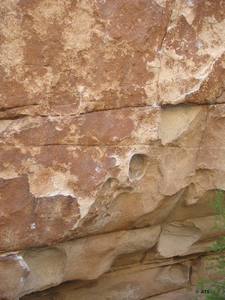 The "easy moves." The bolt on the left belongs…