The Big Water Boulders are a Dr. Seuss, lunar landscape of sandstone blocks, that have rolled down from the Straight Cliff formation and come to rest on the battleship gray Tropic Shale below. The Straight Cliffs form the edge of the Kaiparowits Plateau within the Grand Staircase National Monument and were formed during the late Cretaceous period in a marginal marine basin comprised of slow rambling rivers, bogs, swamps and the shoreline of a warm ocean. Flora and Fauna were abundant during the period, the evidence can be seen in the vast amount of fossils scattered in the shale. Keep your eyes out for sharks teeth and dinosaur bones.

Ninety percent of the rock here is complete choss but at least the solid stuff is dusty. One must have a good rock reading nose in order to sniff out the goods. Varnish is the key! Look for orange, brown and black streaks; avoid yellow and white poofy looking rock. Overhangs are rare, with most of the boulders yielding crimpy faces, compression features and pockets that require balance and technical footwork aka slab climbing skills.

Things that set the Big Waters apart from most other areas:

1.There are literally 1000’s of V0 and V1 problems to do. Lowball problems with cushy landings are everywhere for the young and non-committal. My wife and young children don’t have to walk far to find a high quality line to crank on.

2.The landings are the best! Tropic Shale is a pain to dust off of your shoes before each burn but is awesome to crater into when a hold pops.

3.Quiet. In over 15 years of climbing I have only run into a handful of people out there.

4.The photographic brilliance is second to none. It is an absolutely beautiful place.

For more on what to do around here:  Canyon Country Outdoors

WEATHER The Big Waters are great in the early spring, late fall and winter. The summer however sucks. It is hotter than two jack rabbits pitchin' woo but worse is the Dog Pecker Gnats; tiny little chingosos that were sent from hell to bite the living piss out of you and then climb into your ear hole and dodge the hastily crafted stick retrieval devise you have created to smash them. Dog Pecker Gnats are like mosquitoes on steroids who haunt the boulder field from early June to Late July. They should be avoided at all cost by going to the lake and deep water soloing on water rotted sandstone.

There is no doubt that people have stopped and dinked around on these boulders before we arrived but I have never found any evidence of their passing. The development of the Big Water Boulders began when Matt Penrod showed me the area in ’97 or ’98 and I instantly fell in love with the place. I spent a considerable amount of time exploring and made it my mission to walk around every single boulder. Matt was my regular partner and a group of Pagites such as Collin Keisling, Jacob Keisling, Aaron Price and Ricky Wilson would join us from time to time to contribute an FA or two. I named our posse “The Seldom Seen Climbers of Northern AZ” but much to my chagrin, no one in the group ever referred to themselves as such. I will never be able to recall all of the problems we all did back then and therefore have entered SSC as the FA in cases where I am not fairly sure of who did it first. On any given day 15 first accents were put up, ninety percent of those will never be documented by me.

Camp anywhere you want,  in some of the most beautiful country on God's green earth. Shoot yer guns and howl at the moon! Welcome to southern Utah. If it gets wet you'll want to head across Hwy 89 and into the sand or camp in the gravel pit to avoid the muck and mire.

If you have a 4x4 or a high clearance vehicle --  lakeside camping, swimming and a fantastic side trip may be found down Crosby Canyon Rd

All of the boulders here lay at the base of the obvious Haycock and Mustard Points of the Straight Cliff Formation, easily visible from Highway 89 in Big Water. Off of Hwy 89 in Big Water UT. turn onto Ethan Allen St, drive for 1/3 mile then turn right at the sign in between two large yellow warehouse buildings that says Glen Canyon National Recreation Area - Highway 12 ---- ( Hwy 12 is also known as County Road NP 230). A mile after the turn you will come to Wahweap Creek crossing, under normal conditions the crossing is fine for any type of vehicle, beware during times of rain.

The Moon turn off will be a left about 1/4 mile past the creek crossing.  There is a line of 6 or 7 large rocks that seem like they were put there as a barrier, just go around them.

For areas accessible by Hwy 12, drive 2 miles past the creek and you will see the boulders on your left at the base of a very prominent point/mesa. The first boulder field you come to is Jupiter about a 1/2 mile off of the main road, a mile past that is the Roadsides and they are right next to the road. FYI there is a No Off Road Travel Area that runs through the middle of the Jupiter Boulders and continues through the Roadsides and past the Thirsty Dogs.

The Thirsty Dogs are a group of boulders at the base of a striking buttress further down the road just past the Wiregrass Trailhead a 1/2 mile hike from the road.

Looking southwest from the base of Haycock Poin… 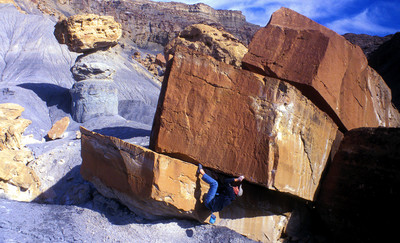 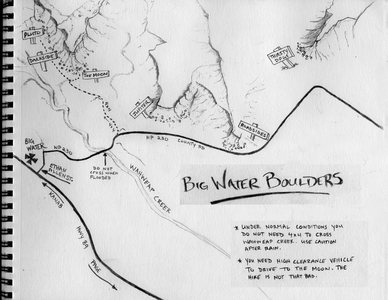 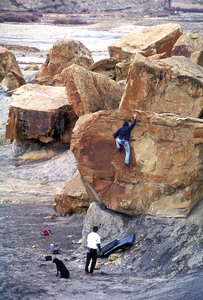 Do you see the white poofy rock at hip height?… 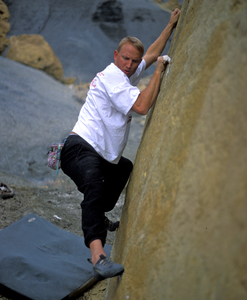 There are literally 1000's of low level travers… 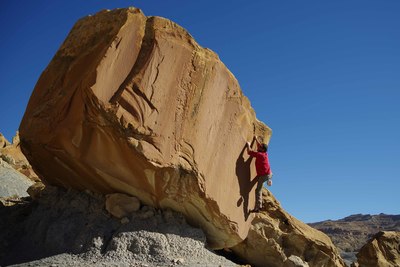 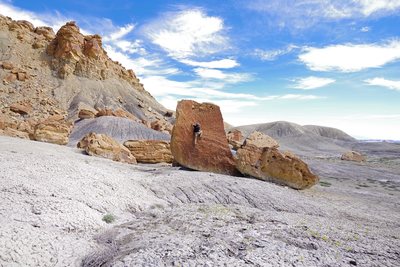 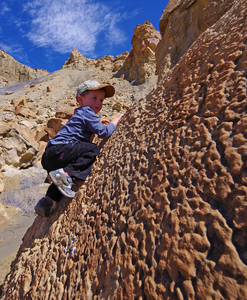 The Big Waters are kid and beginner friendly 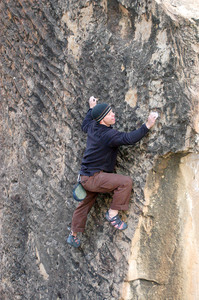 The Ripple Boulder is like climbing up a fossil… 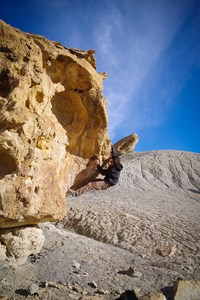 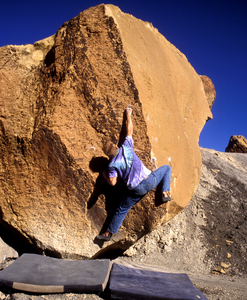 A Panorama of the main field at NP230

All Photos Within Big Water Boulders