Portland may be small, but it is one of, if not the, premier sport climbing destination in the UK. Geographically it is a small island off the South coast of Dorset, barely 4 miles long and 1.5 miles wide, accessed by a causeway from the mainland. It is surrounded on all sides by limestone sea cliffs and offers bolted routes across the entire range of grades from 5.easy to the mid 5.13s, as well as a smattering of adventurous traditional and deep water solo routes.

Each of the crags has its own character, with prominent bands of chert on the Neddyfields and Godnor cliffs, compact fossil-endowed limestone at Battleship and the South sections of Blacknor and flowstone at Coastguard and Blacknor North. Even more wild are the huge stacked roofs of Cave Hole, while tamer, more sheltered climbing can be found on inland crags such as the Cuttings.

Development is still rapid, especially in the lower (sub-5.10) grades, owing to the liberal bolting policy and continuing popularity of the area

Dorset is blessed with a mild climate and a generous helping of sunshine, meaning climbing is possible year-round. In the winter it is normal to make the most of the sun by starting on the East-facing crags of the Cuttings, Godnor or Neddyfields, then moving after lunch to the Blacknor, Battleship or Coastguard on the West. In the summer, the opposite is necessary.

Another consideration is the wind, the East-facing crags giving shelter from the prevailing South-Westerlies

The nearest major town/city is Weymouth, on the mainland. From here it is just a short drive or bus ride (take the number 1 from the King's Statue) to get onto Portland itself. Once on the island, it would be possible to walk from crag to crag, but most will choose to drive around. Other options would be to take bikes, or the number 1 bus, which does a frequent circuit around the island (£1.70 single fare at time of writing)

Weymouth is approached by car from London on the M3, then A roads past Bournemouth and Dorchester. From the North, the M5 followed by A37 is probably the best bet. By rail, there are direct trains to Weymouth from London Waterloo and Bristol Temple Meads.

There are currently two main guidebooks: Portland the 2008 definitive guide, by the Climber's Club and Dorset, a 2012 select guide by Rockfax. Due to the rapid development, there are a lot of routes that don't appear in the current definitive, which are covered by the newer Rockfax book (and vice versa). That said, either guide should have more than enough to keep even a seasoned local happy for a long time.

Like most sea cliffs, there are access restriction to some regions of Portland due to nesting birds. Notes are made of these in the area pages, but for the most up to date information, check the relevant sections of the BMC's Regional Access Database

Mountain Project's determination of the classic, most popular, highest rated climbing routes in this area.
More Classic Climbs in Portland » 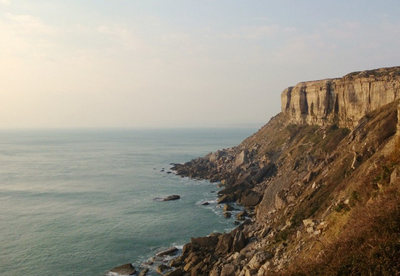 All Photos Within Portland