Routes in The Cuttings

A good but rather popular inland crag with sport routes across the entire range of grades, from 3 (5.2) to 8a (5.13b), up to about 25m in height. Due to its inland location it is less prone to getting damp and greasy than the coastal crags; its Easterly aspect means it is sheltered from the prevailing South Westerlies and dries out quickly in the morning sun. Consequently, it can often be in good condition when the rest of Portland is not. In the summer however, it is probably best to avoid climbing here in the morning sun, instead waiting for cooler afternoon conditions.

Unlike a lot of Portland, the limestone walls at The Cuttings are not natural; as the name suggests, they are the remains of an old railway cuttings. The railway itself, which serviced the island's quarries, is now long gone, but it has left a crag with easy access and a good, flat gearing-up/lunch area at the base.

The crag itself consists largely of a series of bays with plentiful corners and aretes forming the basis of many routes. Typical of quarried limestone, a lot of the holds are quite blocky and flat, rather than the pockets and crimps often found on natural outcrops.

The easiest of the routes at the left side of the crag are suffering from their popularity with beginners groups and becoming rather polished. The hardware is also showing signs of wear - if you're setting topropes up for a group, please use your own quickdraws rather than the fixed staples/rings!

Drive South through Easton until the Portland museum and Church Ope road on the left. There is a free car park about 100m further on, on the right hand side of the road. Walk back up, and down Church Ope road, until the coastal footpath. Turn left (North) onto this, and continue past the New Cuttings to get to the Main Crag. 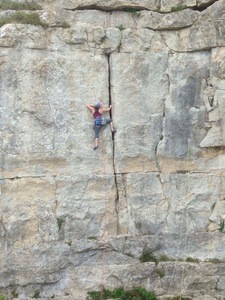 All Photos Within The Cuttings


More About The Cuttings