From the MVC:
The Methow Valley Climbers, a chapter of the Washington Climbers Coalition, respectfully asks visiting climbers to NOT camp or sleep in your vehicles anywhere along the paved section of Lost River Road or in the Fun Rock parking lot ... Please use a blue bag when on route and take all of your trash home. We thank you for taking responsibility during your visit to help keep climbers in good relations with the local community. Welcome to the valley and safe climbing.

From the USFS:
When planning your visit to the Methow Valley, please choose an appropriate campsite and use established toilets, or pack it out in areas without toilets. The roadside pullouts below the Goat Wall and Gate Creek are NOT considered sustainable places to camp due to proximity to the Methow River and lack of toilets.
Please see the uploaded map "Camping for Climbers" for campgrounds ($8-12 per night) and low-impact FREE dispersed areas with toilets within a few miles of your favorite crag. Free sites include: Goat Creek and Yellowjacket SnoParks (April-October only), and dispersed sites west of Monument Creek Trailhead.

The Goat Wall is an enormous glacially carved massif of Meta-pyroclastics standing 1,500 ft tall and over a mile wide. Route potential remains and continues to be developed (though the rock quality varies considerably). The rock can be brown, green, and pink with a shattered look and incipient crack systems. Glacier polish, anti-pumice pockets, irregular cracks, and jagged holds make the texture of the stone. In the early 1900's The wall was first used for mining prospects for silver, gold, and ocpper.

Goat Wall’s first climbing epoch was between the winters of 1987-1990 primarily by the opening of several ice climbing routes with mandatory links of mixed climbing. Eli Holmes, Karen Zikan, a local Czech couple, opened several of the main ice and mixed climbs via ground-up efforts to their natural end. Two of their lines completed the entire feature. The Methow Valley's first climbing guides Tom Kimbrell, Geoff Childs, and partner Jack Lewis were also very active in discovering interesting new climbs.  Near the end of this development episode was the prolific ascent of the famed 1,000 ft Goat’s Beard ice fall. Tom Kimbrell and Jack Lewis would open the largest ice climb in the PNW (and possibly in the lower 48) in a two day effort in 1990. The Goat’s Beard would not see a second ascent until 2013.

In 1989 Byran Burdo and Peter Dorrish would repurpose the wall for summer rock climbing and develop Promised Land, a 1,500 ft 12-pitch sport, trad, aid-climb up a main face of the wall. This was the first route to strategically develop a climb with a drill for pre-placed protection. Then followed the Methow Inspiration Route (II 5.9) by Arain Manchego in 1996.  Burdo returned with Sarah Lenard and developed Restless Natives (IV 5.12a) on the same rock were the Goat’s Beard flows, solidifying a trend of multi-pitch sport.

The second wave of new winter route activity would not be until 1998-2005 where Geoff Childs, Sean McCabe and Steve House would open several new ice climbs that formed unique to this timeframe. The major contribution by House would be a significant uptick in technical difficulty in ice movement by the opening of Cinnamon Stick (WI5+), Sword of Damocles (WI6), and mixed climbs like the Scottish Variation (M6+ on gear) on Claymore (A.K.A. the Czech Gully). Steve moved to Bend and Sean McCabe would tragically pass ending this productive partnership.

Today, Goat Wall has been long forgotten as a venue that offers ice and mixed climbs. The contemporary lens is primarily focused on developing long, equipped, sport climbs.  The Methow Inspiration Route (II 5.9, Manchego, Sisyphus (II+ 5.11, Goldie,Johnston), Prime Rib (II 5.8, Burdo,Johnston) and Fly Boys (IV 5.9, Burdo, Daniels) added to the wall’s resume of longer developed sport routes. Many new climbers have gravitated to these climbs and are enjoying the era of long sport-multi pitches much like the many venues in Europe.

Regardless of the recent trend, some local climbers still see natural lines as interesting and viable. In 2010 two local climbers climbed the Central Rib (III 5.9, Allen,Pond), the largest and most central feature of the wall, in an on-sight ground-up effort to explore the feasibility of a natural rock lines. In 2018 two other local climbers would establish Redemption (II 5.9, Goldie,Pattison) yet another ground-up trad-line on the wall.  In January of 2019, the winter climb Mazama Queen (III M6 WI3 PG13, Allen,Keena-Levin) was completed after a 3-year effort resulting in a ground up, 9-pitch, developed mixed climb focusing on natural lines with primarily gear protected pitches and equipped anchors.  Later that same January, a ground-up 6-pitch trad-mixed climb would also be opened, The Great Zawn (II M5+, Allen, Brett) beginning at the Rainbow Mine Shaft near Gate Creek.

If there is anything to glean from the wall's history it is that there is not a-way, and an ethic has not crystallized. This is a multi-style venue with some very active players, with fits of activity.  Goat Wall is known for only a few of its climbs, however, it has an exceptional history and has attracted great talent. The Goat’s potential is not fully discovered. To think that you need a drill to explore on Goat Wall is absurd. To stigmatize the use of drills is equally off balance and limiting. Style should always be considered along with how the development of a route will effect the venue and its culture. furthermore, what are the impacts? One thing is for certain, this once-be-choss pile is now a very important part of the Methow Valley's climbing activity and appeal. If you are visiting, please respect it for those that will enjoy it after you. Clean up your trash and bag your poop. Most of all, have a great time on the Goat, it has a lot to offer.  ~Mark Allen 2019

Warning: Come prepared to climb this wall. The plan of walking off should not be your only option. Be prepared to not make it to the top. It’s not a gym. People do die here. Many have been rescued. It is not a good first multi pitch venue unless with a professional guide or expert partner. Respect the community around the Methow Valley, and not just the climbing community.

3 miles north of the Mazama Store on Lost River Road. 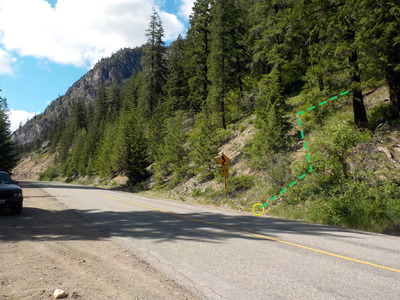 2.9 Miles: Parking and Trail heading up to the… 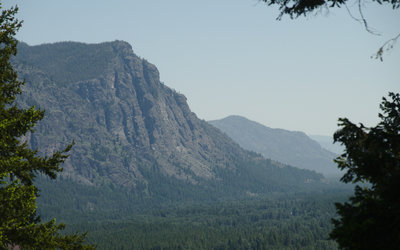 Goat Wall from the west. 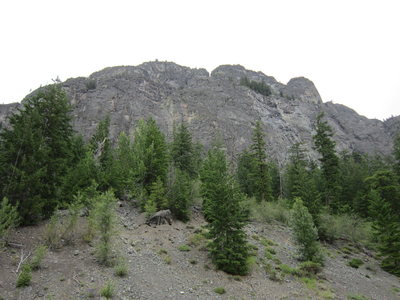 Goat Wall as seen from the Prime Rib approach p…

All Photos Within Goat Wall