This route ascends the left side of the enormous chockstones between the North and South Early Winter Spires before taking easy and slightly loose chimney weaknesses to the summit plateau. The first pitch climbs a low angle slab with layback crack (best to scramble), followed by a 200 foot section of walking up the gulley (snow in early season) towards the giant chockstone. A pitch of 5.7 bypasses the chockstone on the left. Belay at a selection of boulders, or the rappel bolts on the chockstone. The couloir continues above (moderately steep snow, ice axe/crampons in early season, rubble walking mid-late summer) to another chockstone, which is passed on the left up a golden 5.0 ramp. Belay at rappel bolts, or continue right to belay higher, then up gulley/ 5.4 chimney systems to the summit plateau for ~2 pitches (easily simul-climbed, much loose rock). The summit is 3rd/4th class scramble from the top of the chimney system.

Locate the route between the North and South Early Winter Spires on the west side of the formations.

Route climbs up towards and around the giant chockstone.

Rappel starts 30m down and skiers right of where the route tops out. 4 bolted rap stations with 60m rope and one tree rap down the 5.0 slab at the start.

Single rack to 2 inches, draws for fixed pins. Ice axe and potentially crampons if there is still snow in the gulley. 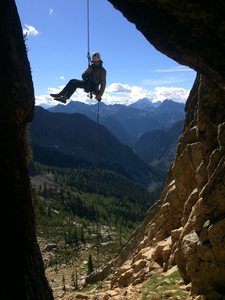 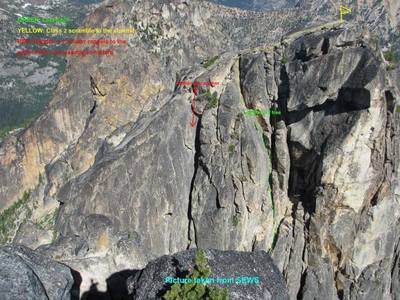 Final pitch gully. If you do one of the right g… 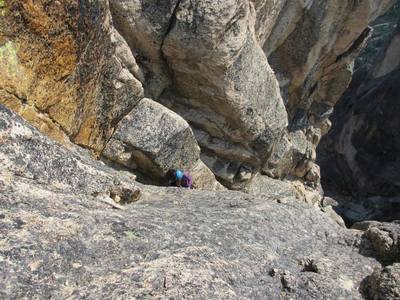 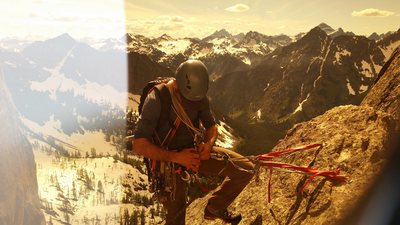 Preparing to rap off the giant chockstone.