One of the best big mixed routes in the Rockies, Cryophobia gives you hard, sustained climbing on overhanging rock and vertical ice! Most of the pitches are about 30m which gives you time to recover and minimizes rope drag. Here's a breakdown of the route.

P2, M7+, 30m. Climb past some ice blobs to a thin seam, then a tricky traverse right to a bolted station. It may be better to climb to the next bolt and then traverse.

P3, M8, 30m. Move left then up to the roofs, on solid tools, then pull through (crux) to the wall above. Climb the ice curtain and then continue on easy ice above to a station.

P4, M7, 30m. Climb up to and through a bulge using good holds. Continue up the overhanging wall to a station on the right. This pitch is a bit harder if ice fills the crack you follow.

P5, M7+, 30m. Move up and left to the overhanging wall on good holds, which quickly disappear. Pull through to the ice on poor feet and long reaches, and then up to a bolted station.

P6, WI5+, 30m. Climb up and around onto the face of the ice and set up a belay where the angle eases, and set a belay.

All bolts are well placed, and with a few cams, it is never runout. When completed, this will be a memorable route!

The route is in the same amphitheater as Hydrophobia and is actually north of the North Ghost, on the South Fork of Johnson Creek.

The best approach is from the north, via Waiparous Creek, but this requires a sturdy 4WD and some dicey terrain, including stream crossings, which are usually best attempted in late season. New wilderness regs require that you park at marker 131. Depending on conditions, expect about a 2hr hike to the route.

The link below (Will Gadd's Gravsports) spells out the Waiparous Creek approach. Marker 131 is about 1/4 mile from the fork mentioned in step (9) in the following approach description.
gravsports.com/Ice%20Pages%…

Some parties hike north from the North Ghost. Take the trail to the second Johnson Lake. Cut left across the lake and hike northwest into the drainage north of the Sorcerer route drainage. Take a compass, especially if you're not leaving tracks in snow!

Soon after you're in the drainage, you'll be able to see the route. This hike can take up to 3 hours. 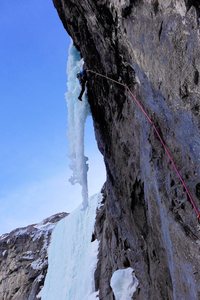 Dave Rone on the 5th pitch of Cryophobia. Hydro… 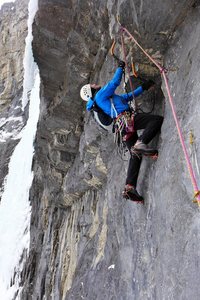 Dave Rone at the start to the crux 3rd pitch. F… 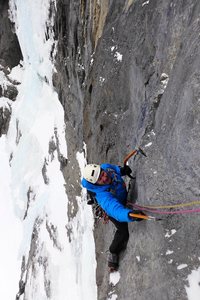 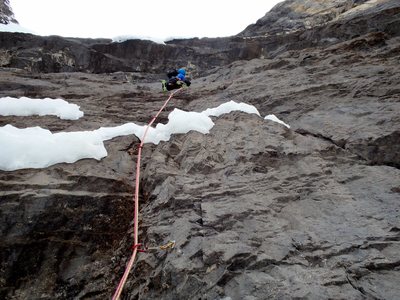 Climbing a fun seam on the 2nd pitch. Photo: Da… 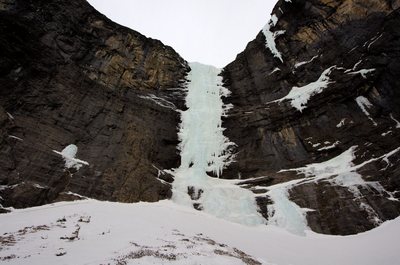 The fat flow in the middle is Hydrophobia. The…