The Ghost was established in 1967 on the front range of the Canadian Rockies and consists of 15,317ha (60 square miles) of raw wilderness bordering Banff National Park to the east and north. Its mountains include Mounts Aylmer, Apparition, Oliver and Costigan. The Ghost Valley actually refers to a larger area that is more specifically located approximately 30kms north of Canmore along the eastern border of Banff National Park and east of the Palliser Mountain Range. The Ghosts glacier carved valleys provide for steep water runoff creating some of the best waterfall ice climbing in Canada. Much of this terrain is considered less avalanche prone than most ice routes in Kananaskis and routes deeper into the national parks. Although not all the Ghost climbs are technically in The Ghost (many of the climbs are in Banff National Park), this whole area of provincial wilderness takes on that identity.

The Ghost Valley is discussed as the South Ghost and North Ghost relative to climbing. The South Ghost is divided into several different areas when discussing waterfall ice: Orient Point, Devils Gap, Planters Valley, Constellation Valley, Black Rock Mountain and Johnson Creek. The North Ghost includes all the climbs along both sides of the Ghost River. The North Ghost routes entail more of a 4x4 drive approach than the South Ghost routes.

The rated waterfall climbs in the North Ghost, meaning those specifically mentioned in Joe Josephsons Waterfall Ice, Climbs in the Canadian Rockies are listed in order as you approach them:


Valley of the Birds

* Dead Bird, III, WI 3/ 45m (climbers right) Not in good shape in March.
* Yellow Bird, III, WI 4+/ 45m (climbers right) Takes some WI 2 to get to the base of Yellow Bird high up on your right hand side, fairly immediate as you start navigating the narrow canyon. Yellow Bird is a fairly wide curtain and gives you different grades depending on which line you chose. We went left which is WI 4 until you get to the cave. There is fixed pro in the cave, looks like a rock line up and down underneath the falls at this point. There are several bolts, but someone rigged a long piece of cordellete to give you a piece of solid pro as you continue on weak ice out the left or hard ice out the right. Either line was WI 5 in character in March, sustained and steep.
* Seagull, III, WI 4/ 30m (climbers left) Solo a real short WI 3 step to reach the base of Seagull. The left corner is dryer and offers a better belay position. The climb is best straight up the gut however and was on the easy side of WI 4 if not a WI 3 in March. There is a rappel sling with a ring straight up to a tree, but it can be dry, loose and messy. I advise top roping Seagull for the second.
* Albatross, III, WI 3/ 100m (climbers left) Not in good shape in March.
* The Eagle, III, WI 5/ 40m (climbers right) By far the best and most challenging route in Valley of the Birds. It is aptly named as it is shaped like an eagle. It was in fair-good shape in March, slightly wet and chandeliery in places. At the dead end of the narrow canyon, take the right fork and gain several ice steps. The Eagle comes into view all at once on the right side. Start up the base cone (which represents the tail feathers) and stay center until you get to the center of the wings. Move left onto a small ledge/ice cave and continue up more solid ice on the left side to a tree rappel. Sustained and steep.
* The Raven, III, WI 4+/ 20m
* Cuckoo Falls, III, WI 2/ 40m
* Snipe Falls, III, WI 3/ 10m

The important aspect of the Ghost regarding safety is that you are on your own. You are not always within the boundary of the National Parks and access can be difficult and long for rescue personnel. I highly advise you take a Satellite Phone (for communication with loved ones who might worry if you get stuck) and always be prepared to spend the evening (read sleeping bag, shovel, etc).

There are no permit requirements to enter, climb and/or park in Albertas Provincial Parks. Cougars and Grizzlies can be more common place in the Ghost than the national parks due to its location on the front range. Take bear spray during non-hibernation months. This can be avalanche terrain during the winter. Therefore it would be prudent to check recent notices posted on the Canadian Avalanche Associations website regarding that issue. However, the ice climbs in the Ghost are considered less avalanche prone than most routes throughout the National Parks and Kananaskis. The frequent Chinooks keep snow levels typically manageable in the Ghost.

The Kananaskis Provincial Park website is a very thorough park website, including trail conditions or closures, wildlife notices, weather conditions, avalanche conditions, camping permits, whitewater conditions, etc. It is an excellent source if you are going to spend any time in the Ghost or surrounding area. Outside of the parks web sites, Canadian Avalanche Association is also useful, particularly for winter travel. Canadian Alpine Accident Reports are also extremely useful.

From Calgary or Canmore, access 1A which parallels the TransCanada to the north. 13.4kms west of the Hwy 22 junction in Cochrane is the Forestry Trunk Road (Route 940). Turn north on the Forestry Trunk Road for 23kms to a gated gravel road on your left. There is a trail head information kiosk board here, but no obvious sign. If you find the gate closed, it is imperative that you close the gate behind you. Most climbers only take 4-wheel drive vehicles beyond this point, but depending on conditions, other vehicles can travel the road. This rough road goes for another 17kms until it reaches the big hill. Along the way there is one ice/water crossing. If this hill is muddy or icy or has too much snow, it can be extremely difficult to navigate. Orient Points The Real Big Drip- 200m- V, M7+, WI 7 can be viewed to the southwest from atop this hill. This is a remote area and very little exists in the way of facilities or emergency help.

At the bottom of the hill, turn right and do your best to follow a sometimes vague, sometimes obvious, track along the right of the wash until it becomes essential to cross the wash heading west and navigate further north crossing a well established bridge over the river and continuing through some big rutts and/or snow drifts until you come to a river crossing. An official government ban on crossing this river is in effect currently (2007) and appears to be an issue at large. Look for signage to that effect. It is regarding trout migration. Whether on foot or vehicle, cross the river and head west following the river. 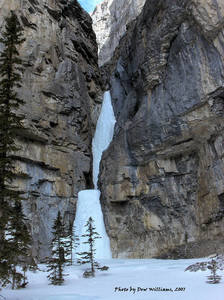 1st Pitch/60m- I combined what many would consi… 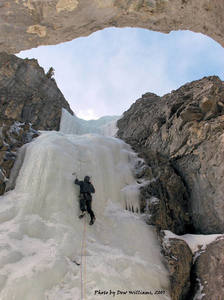 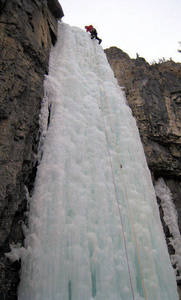 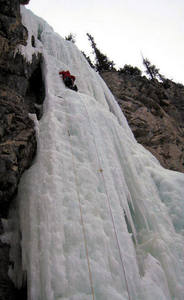 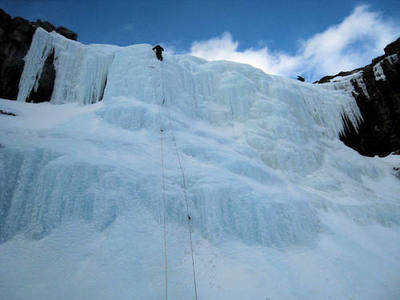 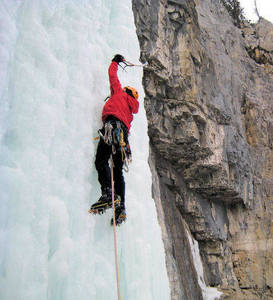 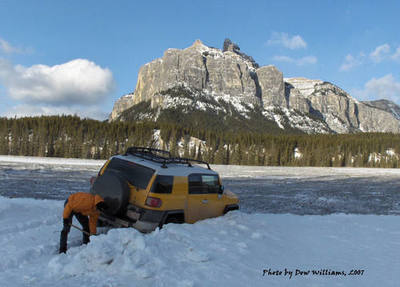 What happens when you just get too cocky with y… 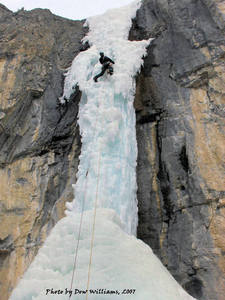 All Photos Within North Ghost