This has got to be one of the classiest lines in Bishop, climbing the pristine north face of the boulder. You could say it's contrived, but only because it's possible to go straight up the jugs to the left from the start. Once you're on the problem, it's as independent a line as any. This one starts on jugs to the left of Center Direct and traverses right via the 'finishing jug' of that problem to a series of edges and crimps midway up the wall. The crux is just high enough to get one's attention and involves a technical heel hook and a committing lock-off from a small crimp. The next few moves leading to the patina jugs are easier but still require some power. Tiptoe carefully up the slab above; you'll be soloing at this point. There are a couple of options. It's probably easiest starting a little further left from the uppermost patina, but you can more or less go straight up from where you finish the problem as well. Either way is a bit bold, but there are just enough positive smears to make it reasonable though insecure. Amazing! You can also climb into this line via Center Direct or, if you're really pulling hard, Direction.

Start to the left of Center Direct on good holds and traverse right at a series of holds leading right and up the face. Top out carefully on the slab above and downclimb the east face and with your hands in a large hueco drop about ten feet to the ground. A pad is nice/necessary for this drop.

Pads and a good spotter. The landing zone is flat but hard as cement. Multiple pads are nice. Don't fall off the finishing slab. 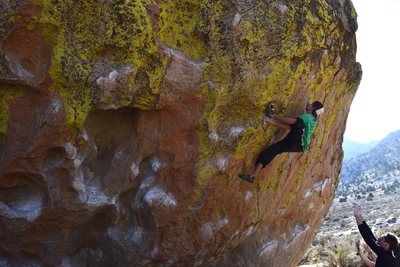 Beginning of the crux heelhook moves