Long, intimidating, exciting. The West Face, even at 5.5, scares people off regularly. It's probably because the rock is worst, and steepest at the very beginning of the route. By no means would I say, "Don't worry about that, it gets safer". If you are frightened by the start, don't go on. But if 5.5X sounds alright, this is a great route. Perhaps the only 5.5X in the Marsupials that can compete with it is the South Buttress of Brogan (ha ha).
But seriously, if you can abide with the runouts, this route is really fun. It's got almost entirely solid rock (just keep an eye out and you'll see the bad stuff), really fun moves, and great position. What's more, it's a long route, and ends on a cool summit.

It is a bit odd calling it a trad route, because it has no gear, and pretty much the only protection is provided by bolts, but then, I would never describe it as a sport route.

The West Face of Brogan starts by the notch at the downhill side of the Spire. The easiest descent (I think): Descend via the Cave Route by rapping off the summit. Rap again down the corner of the Cave Route's second pitch. Pass through the hole of the Cave Route, walk fifty feet across flat ground, and set up one more short rappel to the ground. A single 60 will get you down this way.

You won't need much. Pretty much just stuff to clip into the bolted anchors, and the (very) occasional bolt along the way. Bring nuts for the last section leading to the summit. 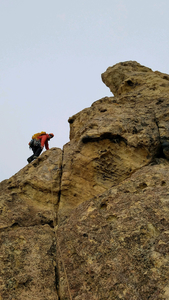 Starting up the final section to the summit. Pr…