Routes in The Coliseum

Unlike many of the other routes in the Coliseum, B.C. requires some bouldering strength. Start with your choice of draws pre-clipped and make your way through slopey edges to some long reaches around the first roof. I recommend pre-clipping the third bolt and leaving the first two unclipped since clipping them creates some major friction around the roof. After warming up on the intro boulder problem take a seat on the ledge and rest up for the rest of the route.

The next section of the route involves meandering through and around some major bulges. The climbing is not particularly pumpy (probably only 12b or so), and resting spots are plentiful, but you'll want to climb quickly and efficiently to save some steam for the final 15 feet of the climb.

With only two bolts to the anchor things get really interesting. Get some high feet (maybe a heel hook) and move aggressively to a half inch slanted edge. The sequence goes with using the slanted edge as a right hand gaston or left hand sidepull. The gaston method is scrunchy and thrutchy while the sidepull method requires tons of static strength but less precision/luck. Skip the second to last draw and make a blind reach around a small roof to an ergonomic jug. In my mind this is the end of the B section of B.C. One more dynamic move to a pocket jug sets you up for the anchor clip. This final dramatic move justifies the split grade. The last two bolts climb like a long V7 boulder problem.

B.C. heads up the center of the Coliseum and can be identified by the huge resting ledge after the third bolt. If there is a long line for Apollo Reed, why wait around? Hop on B.C. and you will not be disappointed!

11 bolts to a bolted anchor. 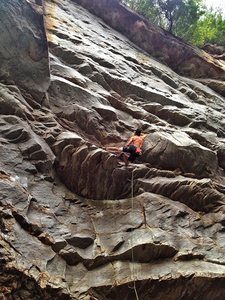 Using the gaston beta in the beginning of the c…