Training Day is a three pitch route that starts off a block just right of Smeagol's Way and fires up to the clean system of faces, corners, and an arete at 180 feet. It was named for Nick Walker (if you know Nick, then you know one of the hardest training men around). TD turned out to be an unexpected surprise in as much as it came in a full number grade easier on the sharp end than I had imagined while running it on jugs.

P1, 5.11b, 85 feet. P1 starts off the block on a large, adherent plate with two closely spaced bolts. These had been placed for the purpose of running the rope off the fall line, which now seems irrelevant, but I left the bolts rather than leaving a hole. Fire up to a black section of rock, with a seam and the crux. Step right to gain the dihedral. Easy moves up the dihedral will drop you at the first three bolt belay station. To clip the anchors, keep the hands in the corner until you can stand easily on a square cut block. Moving left too early will be much more difficult. This gets two stars for P1.

P2, 5.10b, 80 feet. P2 continues in the dihedral to a clean plate at 30 feet. A right hand in the crack drops a number grade off the face. Continue for a short space on some prickly rock, and finish up on a jug haul. Pulling on to the belay ledge may the crux! This gets one star for P2.

P3, 5.10b/c, 75 feet. P3 starts in the corner at the three bolt belay station at 180 feet and pulls around onto the classic sharp arete, finishing on a short face near the top of the crag. There is no rap station at the top, just a two bolt belay station. If you finish on the arete, then walk off to the North. This gets three stars for P3 which has classic moves on perfect granite. Like everything else on Training Day, P3 came in a full number grade easier on the sharp end than imagined from jugs. The transition point from the corner to the arete is made off one of the most unusual holds, a deep vertical pocket that will take three fingers, pretty cool. A bail out bolt was placed in the face at the top in case it is necessary to get to the rap station on the left.

Per Doug Haller: from the base of Empire of the Air, walk uphill, looking for an obvious, dark rock bulge with a thin seam and two closely spaced bolts. The route begins below this in a right-facing corner that contains a large flake (adherent plate) projecting from the left side. 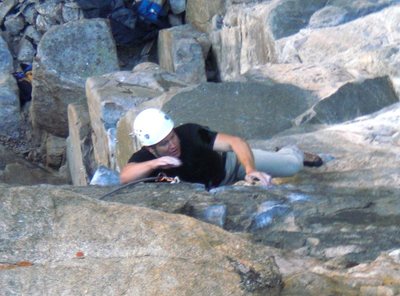 Eric making the crux move on the 1st pitch of T… 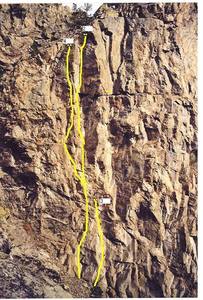 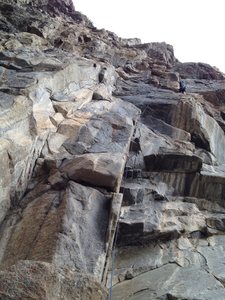 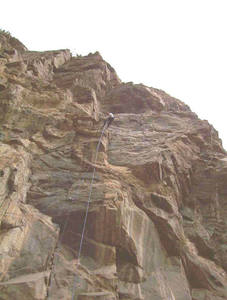 Rapping down the dihedral on TD, P1. 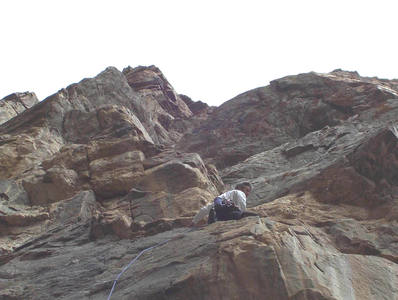 Mark scoping for new possibilities above the cr… 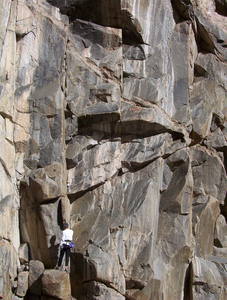 Mark starting up the clean granite corner of Tr…