Also known as simply the Pfalz, this gorgeous area in the south of the state of Rheinland Pfalz has some of the best climbing in Germany. It is the 2nd most important sandstone area (2nd to the Elbsandsteingebirge) with nearly 200 crags and 120 towers providing 5000+ routes. This is also a fantastic area for bouldering, though finding information is more of a challenge than for climbing.

The rock is known as "Buntsandstein" (colored sandstone) and has some very neat structure such as honeycombs as well as many cracks, slopers, and crimps. The quality of the rock ranges from bullet-hard to "ultra-mega-über-crumbly", to quote the Daigger/Cron guidebook.

Being sandstone, the climbing often relies on the friction of the rock, and for that reason, climbing here in the cooler months will feel easier than in the warmer months. Which is good, since the use of chalk here is frowned upon. But unlike the Elbsandstein (where chalk is absolutely forbidden), you can protect the routes with metal stoppers and cams.

The protection of routes in the Pfalz is very dependent on the age of the route and its first-ascensionist. It ranges from hair-raising death routes to bolt ladders, but most of the routes fall in between with logically-placed bolts and weaknesses in the rock which allow for stoppers or cams between the bolts. Climbing difficulties range from 5.1 through 5.14d, so you have literally everything in the spectrum to keep absolutely everyone entertained for their visit. The length of routes also ranges from one-move boulder problems to multi-pitch routes on 60m towers.

Note: There are a number of crags closed to climbing in the first half of each year for bird-of-prey breeding. Before heading out, check out pfaelzer-kletterer.de/pk_sp… to make sure your destination isn't currently closed.

Dahn is pretty much the hub of the Pfalz, though Annweiler am Trifels also works well as a base. These two towns have good restaurant and grocery shopping options, but you can also camp throughout the Pfalz. 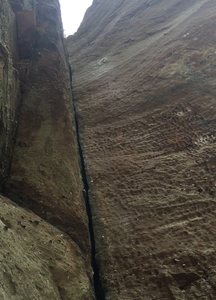 All Photos Within Pfälzer Wald