The Annweiler area is best known for Trifels, a medieval castle that is situated above the town of Annweiler. Trifels played a key role in the Roman Empire during the high middle ages but perhaps the castle's biggest claim to fame is that King Richard the Lionheart was imprisoned there in 1193. Today Trifels is a very popular tourist attraction.

Trifels is situated atop the highest of three steep hills that form a gentle ridge of sorts east of Annweiler. Ruins of two other smaller fortifications, Anebos and Scharfenberg, exist on the other two hills. Of more interest to rock climbers is the geology of the area and the climbing opportunities it provides. Beneath this lush, green forest lies beautiful sandstone and, thanks to erosion, bits of this rock are exposed (predominantly along the crest of the ridge). Today a handful of curious sandstone towers approximately 50 to 100 feet in height provide high quality routes for all ability levels.

Climbing the towers in this area can be a strange experience because some of them saw heavy modification during medieval times. On many of the standard (easier) routes you'll often encounter man-made features like stairs and windows which make you wonder whether youre climbing a sandstone tower or the ruins of an old castle. Of course the answer is both and while the climbing can seem very bizarre (at least to a foreigner), I found the experience to be highly entertaining. If such historically significant masses existed in the US I can guarantee climbing them would be strictly forbidden!

The quality of the sandstone in the area varies slightly but seems to be generally pretty good. It has a remarkably similar look and feel to some of the sandstone found in the desert southwest, however the similarities end here. In contrast to your usual desert tower, these "forest towers" reside in a much more humid environment and thus are rather heavily adorned with lichen and vegetation. Instead of feeling as if they are naked centers of attention like their desert cousins, these forest towers are largely cloaked by the thriving timber that surrounds them.

From Annweiler follow the obvious brown signage to Burg Trifels which is located just east of town. Continue along the narrow, winding road to a large parking area at its terminus. Parking here costs €1.50 and all of the towers can be reached in under 15 minutes via major trails. Because these trails are heavily used by tourists you're almost guaranteed to have an audience while climbing. 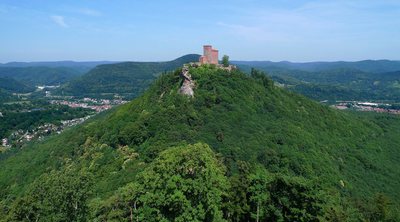 Trifels and the town of Annweiler as seen from…