Owl's Head is a 600ft south facing granite cliff. It is situated in Oliverian Notch. Owl's Head has a couple of dozen or so rock climbs of moderate to desperate friction slab climbing. It has a few ice climbing routes in the winter.

Beavers have moved into the neighborhood after the pasture and before the hardwood forest. These beavers have really made a mess of what was once a simple stream crossing. So plan on getting wet and muddy. There is also a brook that must be crossed in the middle of the pasture that isn't shallow and usually has a fast current. Another access is at the boating ramp road, where it meets Rt.25. Walk until your at the end of the pasture and follow the pasture's edge to the beaver brook swamp section streams to cross. This is national forest property now. I used to enter this way 20 years before the beavers created the wet lands and swamp.

When you get to the woods follow logging roads towards the cliff but it is best not to approach the cliff from it's central eastern side. Find the wide sandy logging road and remain on it (be careful of reforestation pine trees knee high to a grass hopper on the road) until you are heading north towards the cliff. Where it ends there are small cairns to follow near to the logging road on the central slightly east side below the base of the cliff. It is an easy short hike to the base. 2021 Update - See Comment - a path has been made from the parking pull-out on Rt25 to the cliff. The pull-out is on the north side of the road shortly after passing the Appalachian Trail crossing.

On the west side are the easiest climbs (for the most part) to the central buttress that separates the west from the east side or the owls nose or beak and known as the nose. The east side of the nose is primarily harder routes but a few easier lines do exist on the most eastern side. It should take less than a hour to be at the base of the cliff.

Owls head is definitely not for everyone to enjoy. Even the easiest routes have long run outs and route finding difficulties. Because many of the steepest climbs were bolted and the cliff is south facing, the bolts not made out of stainless steel tended to wear out quickly. Therefore much of the bolts placed in the 1980's and early 90's are rotted. There are several trad climbs without any bolts and a few rotting pitons on them.

Owl's Head has been climbed since the late 1930's up the center nose buttress area by Bert Jensen and his companions. The Dartmouth Outing Club (D.O.C.) utilized the cliff continuously for decades. It has had advent visitors since Jensen's first ascents over much of the cliff for traditional climbs.

The main boiler plate slabs are 400 feet east side. Top of it used to have a bolted rappel line I established in 1986 (not stainless steel). Other areas of the cliff you must walk off and down to get back to your car unless there are trees to do multiple rappels down. The best way to walk off is by heading up and then east after the cliff's summit until you can steeply descend just past the cliff's east side. This will bring you back to the base of cliff. It is easier to avoid the base and head south east through the woods to ridge above talus field before heading west to the logging roads that brought you in. Climbs on west side are descended best by the western summit until passed the cliff. If heading down before cliff ends careful descent down is needed and the talus rocks many are loose dangerous footing.

Lots of climbs after 400ft of steepest rock become closer to 4th classing between boulder problems because of the short low angle walls, slabs and tree ledges 200 feet down from the summit. This is an area of caution because of loosened rocks and possibly boulders from freeze/thaw and expansion of rock from tree routes.

Owl's Head was the cliff utilized by Audubon to reestablish Peregrine Falcons to N.H. The project was successful and abandoned on Owl's Head around 1988, and wise to check with the fish and game department on whether or not there's any Falcons nesting each spring. Red tail hawks nesting near here was more common.

Prior to the newest ascents and some of them from the late 1980's. These dates I only know of vaguely who did what but not exactly where the details of bolt protection and their metal are unfortunately unknown, especially into the early 1990's. I have had extensive activity at Owl's Head though. I was a regular there. By doing much I found many vintage pitons, that came out with my fingers, and also a few masonry industrial expansion bolts.

All of the climbs moderate to severe face/friction routes on this cliff are run out, but similar to Whitehorse slabs they are considered well protected. There are two newly bolted climbs on the boiler plates center east side and I don't know the rating and length to the climbs.

Owl's Head during the winter of 2008-09 had at least four distinctive rock slides. These slides fortunately had little to no damage to the bolted climbs, but climber beware, I've heard of at least one bolt being flattened high up on a climb right of Revelations. I just became aware of this climb from David Powers (an enthusiast of Owls Head climbing and it's history). The climb was done by Paul Duval. Paul Duval like myself was actively doing climbs through the 1980's and was still actively climbing here in 2000 up to recently. I forgot his name until I read about his fatal rappel climbing accident. I'm sure some of the climbs I've listed by name of the climb and unknown first ascent are Paul's climbs. Expert climbers have broken bones from falling. There have been no fatalities here.

Rock Climbing New England by Stewart M. Green is an excellent book for facts and topographic photos of many routes here and other off the beaten track ledges are in this 432 pages book.

Go west on Route 25 from Interstate 93 onto Route 25 (Tenny Mountain Highway exit) at Plymouth. This road becomes (Mt. Moosilauke Highway) to Oliverian Notch. This is approximately 35 miles from Plymouth, N.H. 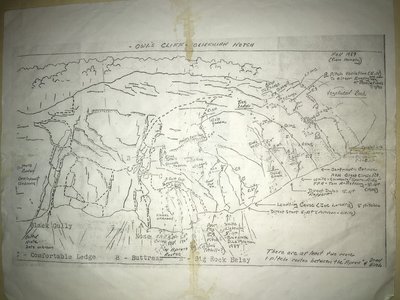 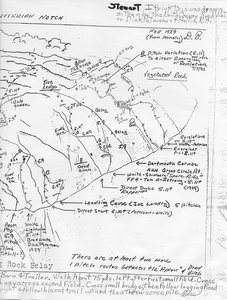 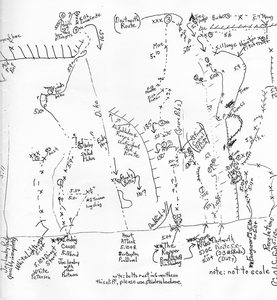 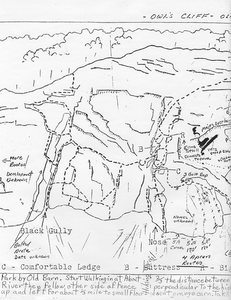 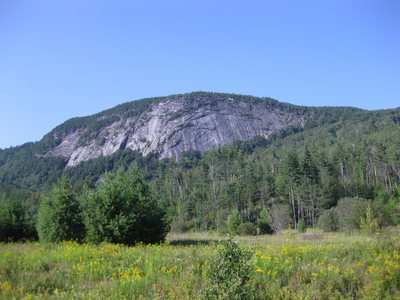 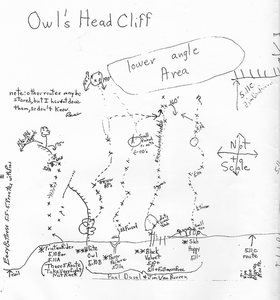 Low resolution version of a high-res pano I hav… 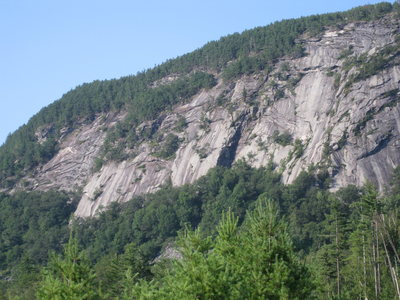 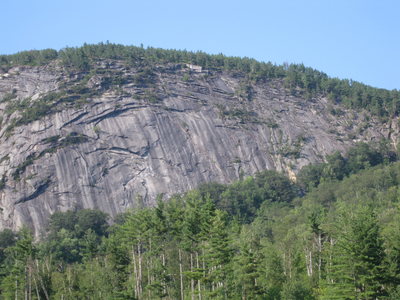 Central and eastern side