The most sought-after summit in the Cirque of the Towers, along with Wolf's Head. This is probably due to its listing in 50 Classic Climbs. Home of the classic Northeast Face route and several other fun moderates.

Summitpost.org has excellent information on Pingora.

A bolted rappel route has been added to the climber's left of the South Buttress. A topo has been shared in the photos for the area

I am aware of two full descents: either i) down climb East Ledges with a rap or two or ii) use the better descent near the route South Buttress. The latter is the faster, most direct way of the two and is described below. Also described below is a rap route that gets one towards Tiger Tower and Wolf's Head (e.g., used as part of linking up Pingora with the other two towers).

Southerly Descent To South Shoulder: This descent can be done in four raps with a 60 meter rope if comfortable with some low-fifth-class down climbing (5.6?) - watch rope ends! A 70 meter rope avoids the down climbing. And the last two raps can be combined with double 60 meter ropes - not sure if double 50's will reach. Note that the lower part of this rap descent deviates to skier's right of South Buttress route.

Thread second rap anchor and toss skier's left. Rap a little left and then straight down ~31 meters to a smaller but still very ample ledge having the third rap anchor. At the last part and with careful attention to rope ends, my 60 meter rope allowed a much shorter and easier down-climb - one or two 3rd or 4th class moves.

Thread rope through third rap anchor and toss straight down. Rap ~26 meters to anchor with fixed nuts and with little on which to stand. Then rap again to ample horizontal ledge which is a total of ~50 meters below the third rap anchor (i.e., these last two raps can be combined in one double rope rap).

Hike the ample horizontal ledge to skier's left back to the south shoulder of Pingora (i.e., to the vicinity of the starts of the routes South Buttress and East Ledges). There is a short 2nd / 3rd class ~horizontal section just before reaching the south shoulder.

To start, locate the huge cleft that splits the west side of Pingora's summit. On the summit and south of that huge cleft, find a short dihedral to down climb / down lead and continue for roughly 80 feet (?) to reach the first rap anchor. After that, the first rap anchor is from chock stones inside a much smaller and independent cleft than the cleft on the summit. The first rap immediately goes around a corner to skier's right: funky with rope drag on the pull. Continue rapping ~mostly straight down. The last rap ends on north side of the notch between Pingora and Tiger Tower, and may land one in snow. A 70 meter rope probably keeps this to four raps; again, we had a 60 and rapped five times.

A scramble up and over to the south side of the notch gets one into the sun and onto good rock heading up Tiger Tower.

Mountain Project's determination of the classic, most popular, highest rated climbing routes in this area.
More Classic Climbs in Pingora » 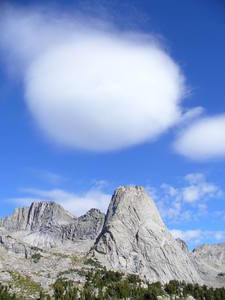 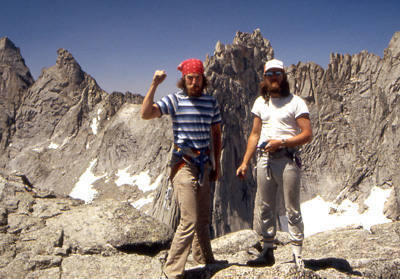 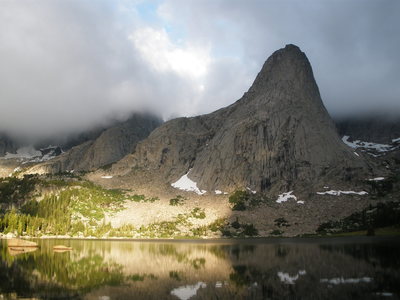 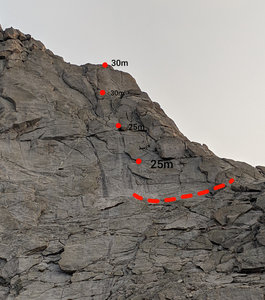 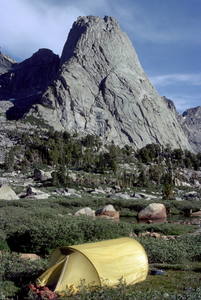 Pingora in Cirque of the Towers 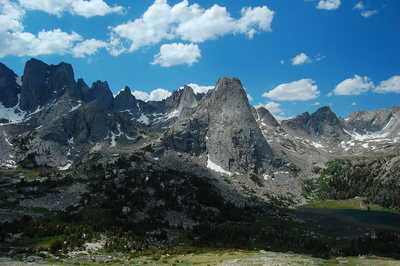 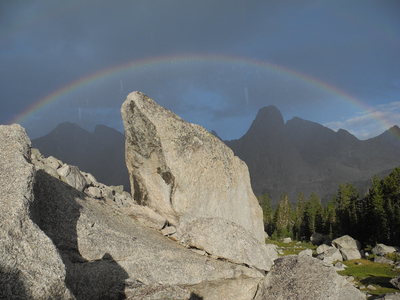 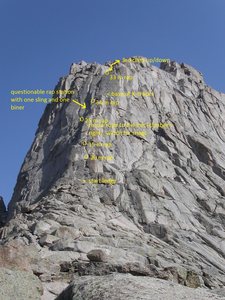 Rap stations/descent from the summit of Pingora… 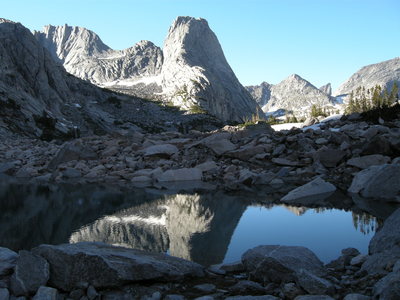 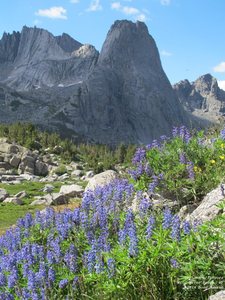 Pingora from the Arrowhead Pass 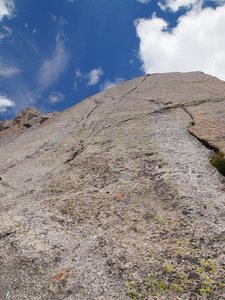 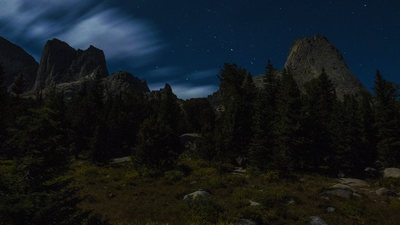 All Photos Within Pingora 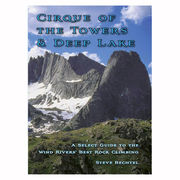 Cirque of the Towers and Deep Lake: Guide to Wind Rivers' Best Rock Climbs
Steve Bechtel (2008)
This is the guidebook to have for the most popular routes in the Winds. It includes all the class…