Pingora was declared unclimbable by Bonney and the Garnicks the day before they were first to ascend it via this route.

Climbing East Ledges can make for an easy day of climbing if still acclimating to altitude. And / or it can be an easy way up to then familiarize with descending before striking out on a longer Pingora climb.

Some guides indicate East Ledges can be descended with a lot of down-climbing plus a rap or two; but I agree with some that the rap descent in the vicinity of South Buttress will usually be faster. For a couple of descent options, see the below photo and its' comments. 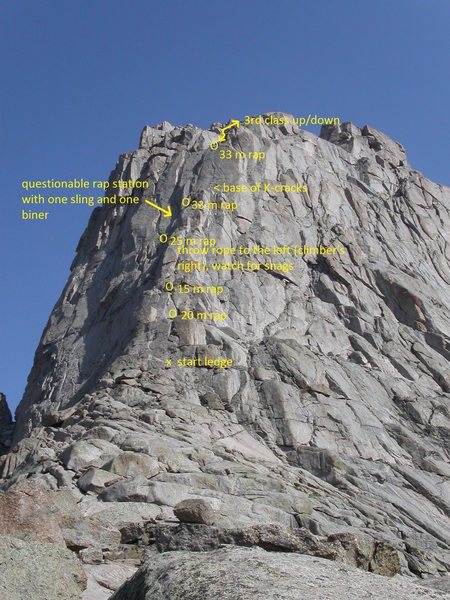 Rap stations/descent from the summit of Pingora. 70m is best. Could shorten the the number of raps with 2 70m ropes, but the rope snag factor will increase significantly. Photo taken from David Fantle as posted by MP user G. Neely here: mountainproject.com/v/10653….

Starts a few yards to climber's right of South Buttress.

Climb up obvious ledges which traverse to climbers right across the east face. If the climbing gets harder than low fifth class, look for an easier way - perhaps even going down for a bit. After about four long pitches you should be at the top of a kind of gully which is below the false summit block on the NE quadrant of Pingora. From here, the easiest way to the summit is to traverse climbers left along huge ~horizontal slabs until one can round the SE corner (clockwise) into the gully / ramp leading down to the South Buttress rap descent. Or first head back right and up along that gully / ramp towards the summit.

Alternately, after the four long pitches and at the top of the kind of gully which is below the false summit block, the Bechtel guide shows East Ledges heading more directly up onto the false summit and then rapping off in a direction towards the summit. We also tried this way although some climbing we found was at least 5.7 ... Lie back up a clean right-facing corner for about 20 feet onto a large sloping ledge. Then make a few moves up a large crack / weakness but bail rightward / upward along a smaller crack to a smaller but ample sloping ledge that leads right. Move right and then up a huge chimney / alcove by face-climbing on the left side. After topping out here we found some old rap webbing at a pinch point. Scramble climber's left across the false summit to major weakness and down a few exposed moves to a rap anchor. Rap, down lead, or free solo the descending ramp.

Note about the alternate finish: NOT "bailing rightward" but instead continuing up the large crack / weakness leads up to another large ledge and to the base of an off width that looked 5.8/5.9 to us - takes 4 to 5 inch gear which we did not have. This off width leads more directly to the rap off the false summit but we backed down to the smaller rightward crack.

Light alpine rack. We did find a piton along the way. Add a couple 4 or 5 inch pieces if wanting to do the off width along the way to the false summit. 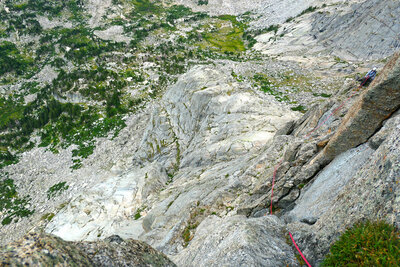 Looking back at the start of the ledges. 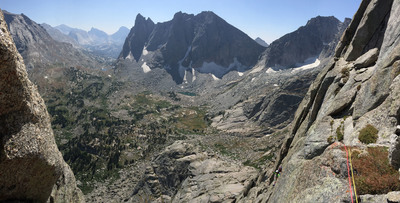 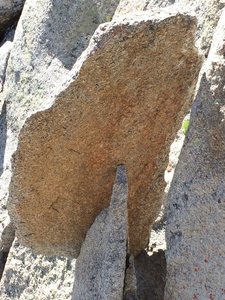 Be sure to ponder the "fickle finger of fate" b… 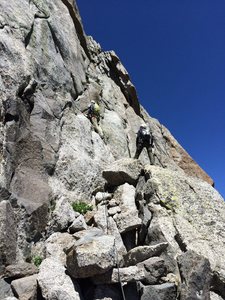 Howard Snell and Bill S heading up the start of… 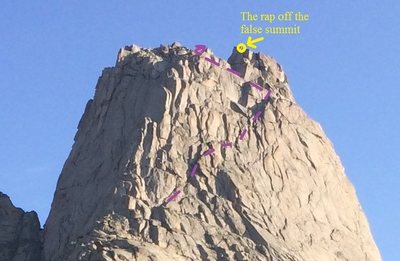